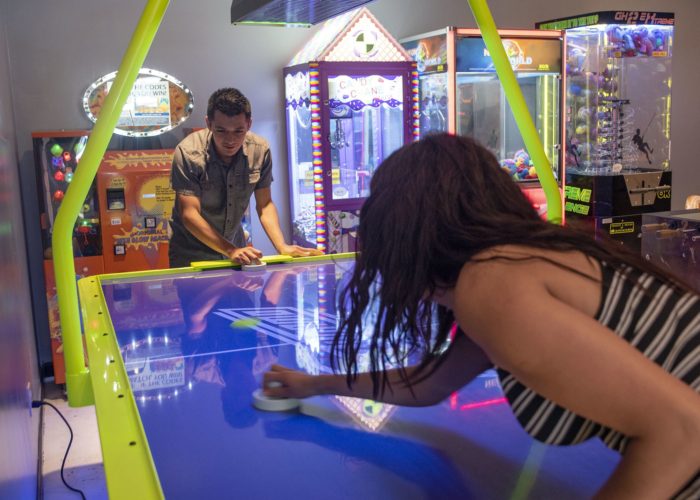 The Muñoz siblings are from Madera, a mountain town in the Mexican state of Chihuahua. The business has been a dream of Patricia’s since she was a teenager in Mexico. Renteria recalled, “My mom (Patricia) and my aunt (Norma) decided to have a little place for kids. And my mom has always been wanting an arcade. So we just decided to also include ice cream and fruits.”

The plan for this business started about a year-and-a-half ago. It came from a desire to have a place for kids and their friends to go for food and entertainment.

Renteria said when she was younger and growing up in Carbondale, there was no place for her to go out with friends. Now, Renteria sees the same thing happening for her younger brother, Darey, who is twelve years old and a student at Riverview School. She said, “The only places would be like, we have to drive him to Glenwood or El Jebel.”

Darey, when not playing his favorites of foosball and air hockey, helps with the day-to-day operations. Renteria said, “He’s really smart, so he does know how to use the register.” She added, “He does help to move us forward. And so he’s like a big part of this as well.”

One traditional Mexican drink is a mangoneada, number 15 on the menu. A mangoneada is made with chamoy sauce, diced mangos, lime juice, and chili powder and decorated with a tamarind straw.

Renteria stated all creams and sauces are made on-site, from scratch with fresh ingredients. Renteria said Magic World shaved ices are made their homemade syrups, which are naturally flavored by using the fruits themselves.

The arcade in the back has many games, including pinball, foosball, and air hockey, that are a throwback to another era. And here is another welcome piece of nostalgia–games average a quarter per play. Those are 1980’s prices. Renteria said they kept all vintage arcade games at their original prices.

There are several games meant for all skill-levels — kids and adults. They even have one of those coin-operated mechanical horses so the little ones can enjoy a fun gallop.

The pinball machine Cyclone was released by Williams Electronics in 1988. It depicts a roller coaster ride at Coney Island amusement park with former President Ronald and former First Lady Nancy Reagan riding in the first car. (A review from this reporter: the ball drains nicely.)

The vision has been a long time in the making. Patricia came to Colorado about 17 years ago but had the idea of starting an arcade since she lived in Mexico. She began raising funds for this business when she and her sister Norma, who lives in Glenwood Springs, started a laundry service in Carbondale in 2013.

Then the two started a cleaning business, and with the savings from those two businesses came the plans for Magic World. Additional funds came from their brother, David, who lives in Albuquerque, New Mexico.

They did a search for storefronts and found their space in La Fontana Plaza, because as Renteria recalled, “It was just like family-friendly, with the stores around [us], so we just decided that this was a good location.”

Patricia said she and her siblings learned, by example, from their parents. Their mom would always work to find a way to help their father financially. Patricia was told that it did not matter if you were a boy or a girl, that “if you ever wanted anything, it was always possible if you work for it.”

Renteria said her mother’s idea of owning a business was a way to create jobs and provide financial security for their family because “She just decided to open a business up for her own, to help other people in need of jobs and to have something for her kids.”

Patricia does not have a business degree; in fact, she has never taken any classes. What she does have is a drive to learn all she can to run a successful business. She scours the internet for information on running a business.

In fact, Patricia honed her business acumen at age 16 while in Mexico. She worked for a candy store when she had the idea to sell candy to other stores farther away. Her efforts created a distribution chain which dispersed the store’s products and boosted its profits.

As for now, promotion and advertising for Magic World is limited to their business Facebook page and word-of-mouth praise from happy customers. The goal is to grow the business to have two additional stores; one to be owned by Elideth and, eventually, the other owned by Darey.

A plan, many years in the making, has come to fruition for the Muñoz family. As a result, kids and adults have a welcome local alternative for food and entertainment. As for me, you will find me at the pinball machine working on my personal best high score.