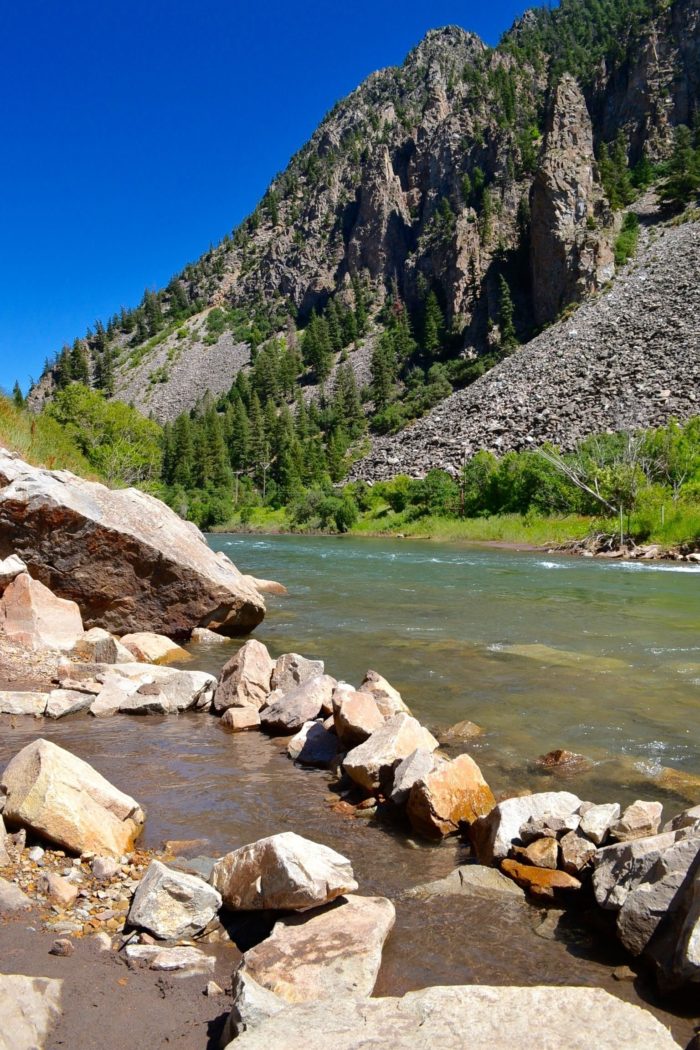 The sun began to phase into the golden hour as people filed into the Redstone Church for a Crystal River Caucus meeting on July 11, but the main speaker, John Emerick noted that since not enough members of the caucus were present for a quorum, no motions could be made nor approved on this evening, although there were many important items on the agenda.

The most anticipated discussion was the Pitkin County Open Space and Trails (OST) presentation on Penny Hot Springs, a local hot-spot in Elephant Canyon off Highway 133.

OST brought Recreation Planner Lindsey Utter in to give the presentation. Utter began with a history of the hot springs, mentioning that many of the perceived issues of today were also brought up in the 1990s, after the county acquired Penny from the Colorado Department of Transportation. A decade later, Open Space and Trails took over management the land and. three years after that, added Filoha Meadows across the river. Now, OST is looking to make Penny Hot Springs their focus for 2020.

Utter went through a list of bullet points for OST’s plan of action. She noted that former management plans for Penny simply included maintaining the current access point to the springs. She stated that after going through these old plans, staff of OST agreed that “…the hot springs is the hottest topic in that management plan update…”

The process being proposed is to collectively create an evaluation of the history of safety reports by pulling the call history from Pitkin County Sheriff’s office and then collecting input from all stakeholders in the valley.

A slew of questions from the caucus members arose. One attendee asked, “I know the Carbondale Chamber has been marketing the Penny Springs and bringing people up here, but they don’t live up here and they’re not even in Pitkin County … why do they get someone on the steering committee?” To which Utter  replied, “because of that exact reason — we’ve had a lot of interaction with them, trying to limit the marketing… so we want them to be a part of the committee to be a part of the process.”

Former Carbondale Mayor Stacey Bernot then asked, “Lindsey, what is the thought process on having the town of Carbondale participate? … I understand surveying and getting their input, but unless they’re going to help manage it or help pay for it, I think the beauty of the steering group is for it to be big enough to have representation but also small enough to get work done.”

Utter  answered, “Yeah, and I think the argument was that the town of Carbondale’s residents are big users and that they are an adjacent government and are interested in participating, it could add to the conversation.”

“Then we should open up to Marble as well…” Bernot said. Utter informed Bernot and the members that the Marble committee has often opted out of decisions regarding OST projects but they will leave it as an option for them to participate.

Other concerns and questions were brought up by Tom Newland, regarding the parking possibilities to which Utter replied, “I wouldn’t say anything has been evaluated, right now we don’t have a study or report.”

Attendee Kate Hudson inquired about the timeline of the survey and that it may be an issue getting sufficient feedback at this time of year, George Newman followed with a similar concern. From this there was a group consensus that the public survey remains open until September rather than only running for three weeks.

Another concern brought to the discussion was that the property adjacent to the hot springs is up for sale and should also be acquired by OST. There was no definitive answer for these concerns.

All seemed to agree that it was a beneficial topic of discussion. Bernot thanked Utter, stating, “This has been a problem on the table for years and I’m glad we’re working on it.”

Pitkin County Open Space and Trails is seeking public input as it begins work on a management plan for Penny Hot Springs in the Crystal Valley. An online survey is available at www.pitkinOSTprojects.com through Aug. 9.

The Open Space and Trails Board will appoint three citizen members to the steering committee – two hot springs users and one resident of the Crystal Valley. The steering committee is expected to meet in September and a draft management plan for the hot springs is scheduled for release in October. Additional public comment on the draft plan will be accepted in the fall, with adoption of a final plan scheduled in December.