Jeffreezz keeps on buzzing despite setbacks 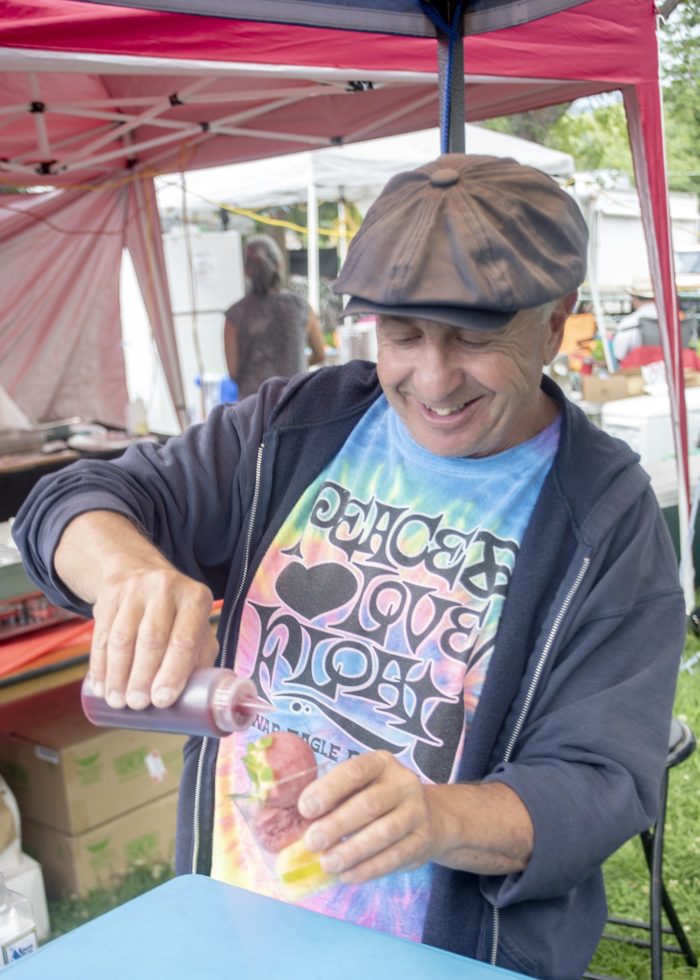 Growing up in Worcester, Mass., Jeff Isaacson learned to make Italian ices from his mother, not realizing it would become a profession he’d cling to even in the midst of a health crisis.

“Every Sunday during the summer I was responsible for making them,” he said. “It was just a chore to me. I never thought that I would sell the stuff.”

Isaacson got his first look at the Roaring Fork Valley on coast-to-coast road trips to his dad’s cannery in Long Beach. The family liked to pull over the Mercury at bridges and see the sights — including the Glenwood Hot Springs, though they never took a swim.

As a college student studying radio and television engineering, Isaacson used to compete with his friends to see how far he could hitchhike over a weekend and be back to Southern California for classes on Monday. He once made it all the way to Summit County, stopping for dinner at Doc’s on the way back.

He was spared the Vietnam draft by a six-month military deferment for a hernia and, after finishing school, decided to get out of the city.

“As soon as I had the opportunity to, I came back to Colorado,” he said. “One the first things I did was get a swim pass at the pool because I never got to get in it as a kid.”

Although he would later find intermittent jobs at local radio and television stations, he discovered there wasn’t much work to be had in the industry in rural Colorado. After spending some time in Steamboat Springs and Utah and even considering going to work on a pipeline in Alaska, he was offered a job at Sunlight Ski Area’s Apple Inn for the winter of 1973. He spent his winter skiing and learning how to bake. When summer came, he connected with Roy Rakish of Glenwood Honey Company.

“There was a strong connection between radio and television engineering and beekeeping,” Isaacson observed. “Bees communicate by vibrations on a very low scale.”

But while he got the bug for beekeeping and is still involved in the business, it wasn’t particularly lucrative back then.

“I had a lot of honey but not a lot of cash, so I was taking the honey and making ice cream,” he explained.

Honeybee Ice Cream had the particular quirk of being sold all over Glenwood from a specially-build tricycle ice-cream cart, with just the sound of his flute to let folks know he was coming. It was an excuse to train for bike racing — a long-held passion — while still making a living with a lighter load than pedi-cabing proved.

“I would hand-crank the ice cream down in the basement in the kitchen after I was bartending, then sell it the next day. Those were long stints,” he said. “It was hard to nail me down, but I did have some ardent customers.”

He had more success setting up at the corner of Eighth and Grand and later on the same bridge he had watched the pool from as a kid.

“I realized that I needed to stay in one spot to make a living,” he said. “People were tired of chasing me.”

He modified the trike so that he could prop it up and churn ice cream with pedal power. After selling honey at some of the first Mountain Fairs, he took to riding up with his ice cream cart. Not content with the carts on the market, he always made his own. The first one was named Helen Johnson, after the elderly woman who donated the wheels from her wheelchair for the purpose.

“It’s kind of nice recycling and repurposing things that had meaning to somebody.”

After a trip to Italy with his mother, he realized he had plenty of dairy-free options to offer and added sorbetto into his gelato repertoire. From his home base in Silt, he’s been a fixture at Farmer’s Markets and special events ever since.

“I can’t say that I’ve changed too much. I’ve refined my technique,” he said. “I have two beautiful daughters — Katie and Lilly — that I’ve raised in the Valley. Their mother is still one of my best friends. I’ve been happily forever engaged with my life partner Diana for 12 years.”

He still works on the mountains in the winter, though now with Ashcroft Ski Touring. This February, however, he began to flag. Thanks to EMT training, he knew the symptoms of heart trouble, but decided to wait until the end of the season, when he already had tests scheduled.

“Every morning I was doing a stress test of my own cross country skiing at 10,000 feet uphill. I noticed there was something going on, but I just kind of wrote it off as gastrointestinal,” he said. “Fortunately, I didn’t have an episode or heart attack.”

When he did come in for a formal stress test on April 12, he failed miserably and was immediately sent down to Valley View Hospital before being flown to Denver.

“It’s been like Mr. Toad’s wild ride ever since. There was just no turning back at that point,” he said. “I just wanted to go home and change the oil on my truck, and I got my oil changed.”

The triple bypass was a success, but not without cost.

He’s not looking for any handouts — though he wants to make sure the doctors are paid. His daughter has no such compunctions and set up a fundraiser at gofundme.com/jeffreezze-heart-surgery. So far, folks have pitched in to the tune of around $7,500, with a goal of $45,000.

Meanwhile, Isaacson has been doing cardiac rehab and stopped going back for seconds. He’s not willing to stop working, but has made some concessions.

“I’ve brought in extra help to get my through all of this. I am the brains now and hire the brawn,” he said. “I cannot keep going at the same level, but for my mental rehabilitation, it’s important that I continue to work. I’m like a little honeybee.”