The fair at the end of the rainbow 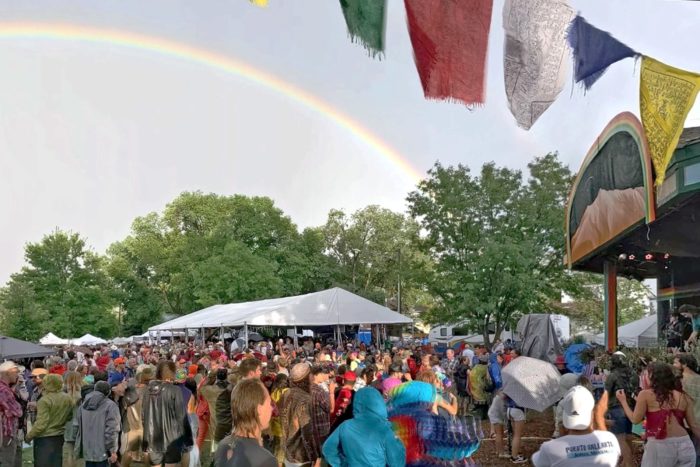 Carbondale Arts got what it asked for with a “Rainbow Connection” Mountain Fair theme.

“It was crazy how many rainbows we had — and really spectacular ones,” observed Director Amy Kimberly.

Of course, with rainbows come rain — although it’s better than sweltering heat.

“Next year the theme is 75 and partly cloudy,” she joked.

But the theme was more than literal, and the real test was how it would live up to the broader ideals associated with the symbol.

“We framed it around the LGBTQ community, but the rainbow flag means inclusivity and for us it went beyond that,” Kimberly explained. “I think a lot of people felt even freer to be who they really were and show their true colors … One girl told me she would never be able to run around like this where she’s from.”

She also hoped that the Latino community might also feel welcomed by the “Carbondale is for all” message. Certainly, there didn’t seem to be any objections.

“We heard a lot of positive comments and no negative feedback,” Kimberly said. “This is probably as political as we will ever be, but we’ll continue to promote human ideals.”

One minor hiccup in the planning stage was a discussion about whether to allow potentially suggestive art in the locals’ booth — specifically Riley Ames’ brightly colored stylized scrotums modeled after the novelty “truck nuts” sometimes seen on cars.

Ames is an area native and was one of the first openly gay students at Colorado Rocky Mountain School. As his artist statement explains, “In my work, I question why many gay men fetishize heteromasculinity, and I explore issues of internalized homophobia and misogyny in the queer community… Critical self-reflection, intensive research, and a wry humor inform my approach to art making.”

According to Ames, at least one member of the Carbondale Arts board was concerned how other artists would feel about being displayed alongside such work. In the end, however, the organization opted to embrace the edginess — particularly in light of the theme.

“I think it was really important that it was there and cool to see people engaging with and learning about it, and it also wasn’t a big deal,” Ames said. “Most people looked at it and laughed or smiled and walked away. A few people scoffed or looked away.”

He did have a few people tell him that his work and statement helped to change their perception, which made the whole thing a success in his estimation. Similarly, he saw the theme as a step in the right direction.

“I saw a lot of people who seemed gay being open about it,” he said. “These things matter, but you have to have the people who they’re about showing up to them.”

The town still has a ways to go in his estimation, though.

“So many of us were here and are leaving to go back somewhere we feel more accepted,” he pointed out. “Probably most people in Carbondale voted in favor of marriage equality, and those same people might feel uncomfortable seeing men kissing in a restaurant. People need to stop seeing queer identity as a novelty or performance and as a valid part of people’s lives.”

The best way to keep the momentum, in Ames’ opinion, is to communicate.

“Do your own research, engage and reach out to people in your own lives,” he said. “Hopefully everything will just keep getting better.”