Why the U.S. Census count matters to you 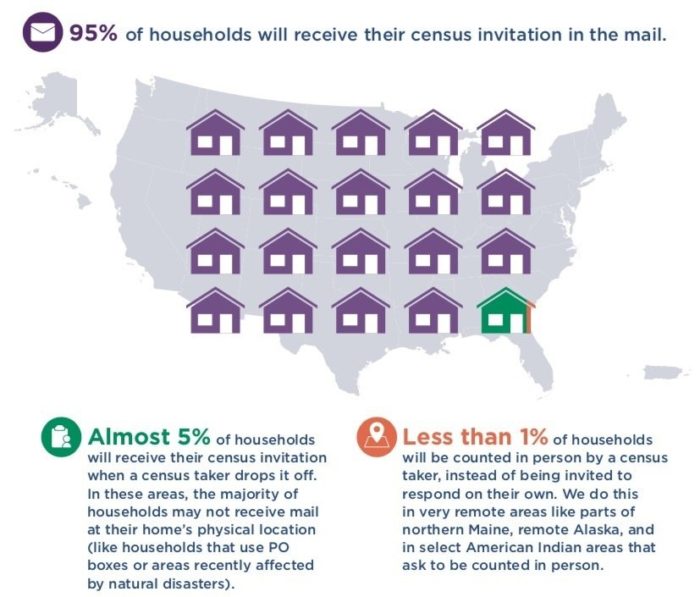 On July 24 at the Carbondale Branch Library, representatives from about 25 local organizations and governments attended a kick-off meeting of the local 2020 Census Complete Count Committee (2020 Census CCC). Phillip Supino, principal long-range planner for the City of Aspen; Brian Meinhart, a partnership specialist with the Census Bureau based out of the Grand Junction office; and Kara Silbernagel, Pitkin County policy and project manager led the presentation.

There are two main reasons as to why an accurate census count matters. The first is population numbers determine the allocation of seats in the United States House of Representatives.

The second is that those numbers are the basis for deciding how to apportion more than $675 billion in federal funds each year — about $13.1 billion in Colorado or $2,300 per person.

The 2020 Census CCC meeting started with plenty of materials being handed out, and then a presentation on the why, how, and when of the census, in order to achieve, as Meinhart said, the goal of counting everyone “once and only once, and in the right place.”

It ended with a question and answer period, with some, who serve immigrant populations, asking questions about how to ensure all are counted and voicing concerns about the confidentiality of census information.

The unease of some in the Latino population is that census information could be used against them. They cite how the names and addresses of Japanese-Americans, was taken from the 1940 U.S. census and used to round up individuals who were then imprisoned in internment camps during World War II.

Congress determined in August 1954 that confidentiality protections were needed for census data, in part to dispel any fears about future census participation. The laws governing the statistical activities of the Census Bureau were codified in Title 13 of the U.S. Code.

During the presentation, Meinhart reiterated that census forms are being printed without a “citizenship question” on them. He emphasized that the wrongful disclosure or release of information comes with a hefty penalty.

He stressed that leaders of Latino-focused organizations “have a role to play because oftentimes, governments don’t know how to work within our community and provide that expertise… We want local governments to partner with us, to reach out to us.”

Even with the protections under Title 13, worries still exist within the Latino community, As Sánchez explained, “[In 2010,] we didn’t have to do the level of education that I believe will be required in 2020, to ensure that people are not fearful and they clearly understand the protections that exist around the laws that protect privacy.” He added, “We cannot hide from the dark past in this country.”

Another area of impact for census data is how population numbers determine representation in the United States Congress. Colorado currently has seven representatives within the 435-member House of Representatives and, with the influx of new residents in recent years, Colorado could gain an additional Congressional seat. If that is the case, new boundaries for congressional districts will be drawn up.

Special efforts are being made to reach what the Census Bureau calls “hard-to-count” populations, which includes unsheltered (homeless) and people living in group quarters (universities, prisons, nursing homes, or other institutional settings). Supino explained they are identifying hard-to-count populations in the Roaring Fork Valley and determining methods to ensure those populations are a part of the count.

Schalla stressed, “We are advocating across our patient and consumer base, and we working with others across our community, to really work to get that census count out and to help to educate the populations we serve of the importance of filling out the survey and being counted.”

The Census Bureau will be collecting census forms in four ways: online, using the internet or a cell phone; over the telephone, by calling the census call center; completing a paper form; or responding to an in-person visit from a census enumerator. Census officials estimate less than one percent of households will be visited by census enumerator; they speculate most people will complete their census forms online. For those without internet access, public libraries will assist in census efforts by providing workstations dedicated to census form submission.

Supino sees the process of involving community partners as a way to proactively head off any potential problems with the implementation of the 2020 census.

In describing the plan, Supino said, “we took a sort of watershed approach because we felt like the organizations that we would hope to partner with on our outreach efforts are working at the watershed scale.”