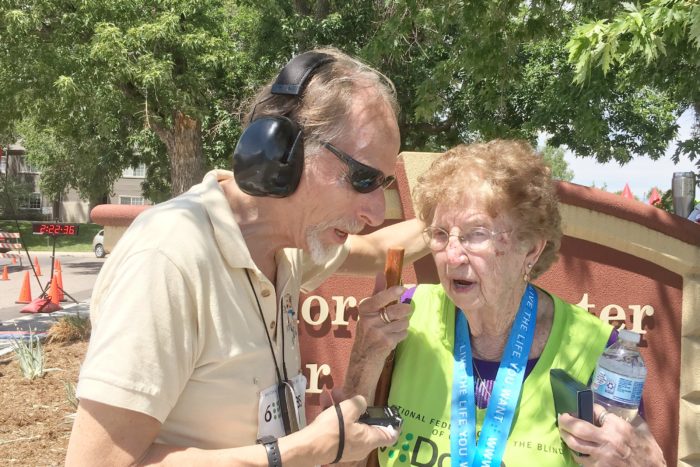 You can’t see the avalanche zone tour, but then, neither can the participants or the reporter recording the whole thing. “Nicky News” Isenberg’s new show on KDNK — “The Tactile Traveler” — is by the blind and for everybody.

“My job is to not only make it interesting for blind people and show them there are things they can do, but it also shows sighted people that blind people can do much more than you expect,” he explained.

Isenberg was one of the most premature babies ever to survive at the time of his birth, and came out of the ordeal without a right eye and issues with his left eye.

That didn’t discourage the inexorable pull of journalism. He left Schenectady, New York to go to school at DU — where he thought the proximity to skiing would be better — and graduated as a speech major. By then, he was developing an interest in civil rights, subscribing to the philosophy that, “if you’re not part of the solution, you’re part of the problem.” As public information officer for the Colorado Civil Rights Commission, he put together a radio show that was ultimately picked up by 18 stations.

“Every week, I had an example of what people you could identify with were doing to eliminate segregation,” he said.

When that role fell apart, Isenberg was encouraged to pursue broadcasting school. As he put it, “All the things that got me fired on other jobs, make me a good reporter.”

Isenberg first came to the valley for a job at KMTS when it initially went on the air in 1977, while still shooting eight to 10 stories for Denver television stations every week.

“That’s where I really, really grew as a reporter,” he said. “It was hard work but God it was fun.”

A stint as a Bureau Chief in Florida ended when he was late on a broadcast due to trouble with his other eye. It became a cycle of decline, surgery and temporary improvement before more decline.

In the meantime, he came back to the Valley for a radio job in Eagle that ended when the transmitter was struck by lightning. He worked for the Rifle Telegram and freelanced for various tabloids.

“They did a really good job of unimportant stories, but they were true and they were accurate,” he noted of The National Enquirer at the time. “You had to verify everything.”

All the light we cannot see

Isenberg became legally blind in 2011 and earlier this month he had his left eye removed, as well.

“I’ve been blind seven times. This time’s sticking,” he noted.

Before he lost his sight completely, he became a student at the Colorado Center for the Blind. He’s still struggling to learn braille and interact with tech through voice apps — ironically, he’s a visual learner — but he picked up an array of skills to get through daily life, from cooking to using a cane. He also became more connected with a new community.

“I didn’t really have much contact with a lot of blind people here,” he said. “What I kept hearing was ‘I went blind and I sat in my apartment for 20 years and only left when I was with really trusted friends.”

That’s how “The Tactile Traveler” began to percolate.

“There’s nobody creating travel situations for blind people,” he said. “If I get off a train in Glenwood Springs, I don’t see mountains. I needed to find things that blind people appreciate.”

He didn’t have to look hard. Soaking in the hot springs, rafting, hiking and going to the vaudeville all offer an array of tactile, auditory and olfactory experiences. He called up the Audio Information Network, an organization that, among other things, reads the newspaper to the visually impaired.

“They thought it was great and would use it if I could produce it, but they had no production facilities,” he said.

So he cast about for a station that would back the plan and, after several nos, got an immediate yes from KDNK.

The first episode aired at 4:30 p.m. July 30 and included the aforementioned tour of an avalanche zone in Maroon Creek as well as coverage of the Six Dot Dash in Denver and a ride on the Denver Trolley.

“The stories are done from the perspective of a blind person checking out something. People are already changing before the show got on the air,” he explained. “I’m incorporating all the things I’ve learned in 50 years as a reporter into the show, but I don’t want to be the only person announcing on there.”

It’s not any easy process writing, announcing and editing a show without eyesight — and Isenberg has serious trouble hearing, as well. He now routes the sound from his recorder through his hearing aids so he can be sure it’s actually on.

As he challenges others to get out of their comfort zone, he’s doing the same with a standup comedy routine built on blind jokes.

“What I’m telling other blind people is you’re not alone,” he said. “We understand.”

He has an idea for a “best blind photographer in the world contest” as well as events and destinations from the Rocky Horror Picture Show to Red Rocks. KDNK had enough positive feedback to greenlight another episode, which will air at 4:30 p.m. on Oct. 30. You can follow the show at kdnk.org/programs/tactile-traveler or through your favorite podcast service.

Right now, the show is run on a volunteer basis, but Isenberg would love to see it picked up and expanded.

“My goal is to make it a weekly public radio show,” he said. “If that happens, it’s going to be huge.”