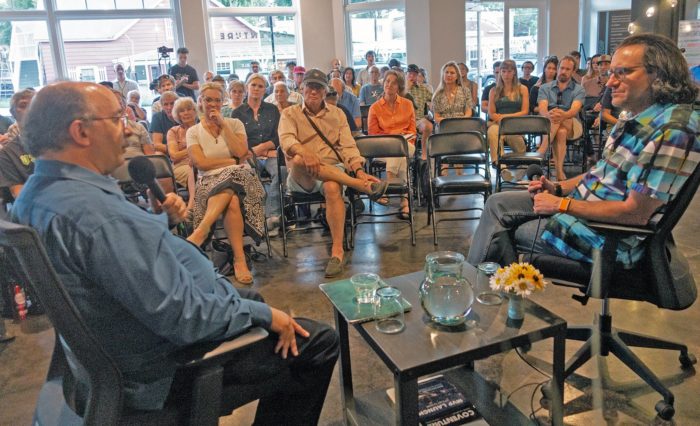 You could call Amory Lovins the father of hybrid technology, and he wouldn’t mind.

The chief scientist and founder of the Rocky Mountain Institute spoke candidly about his achievements Tuesday night at the Coventure interview with Brad Feld, the co-founder if Techstars and a partner at Foundry Group V based in Boulder.

The talk, “Reflections on Four Decades Fostering a Clean Energy Revolution and Where We Go from Here,” took place before a packed audience at Coventure’s offices on Main street.

Lovins came up with the idea of dual energy for automobiles in 1971. Several automobile corporations “slowly started working on this radical concept” of an ultra-efficient automobile dubbed the Hypercar.

In 1976, Lovins published his groundbreaking article “Energy Strategy: The Road Not Taken” in Foreign Affairs, considered by experts to be the leading forum for serious discussion of American foreign policy and global affairs. He argued that the United States had arrived at an energy crossroads and could take a path of increasing reliance on fossil fuels or move toward a “Soft Path” towards renewable energy.

Lovins advocates what he calls the “benign” approach of power, solar, conservation and energy efficiency. He had said the fossil fuel alternative had “serious environmental risks.”

He quipped, “Dirty energy is not cheaper.”

In 1982, Lovins and his former wife Hunter Lovins produced the award-winning documentary “Lovins on the Soft Path: An Energy Future with a Future.” In it they make the case for energy efficiency and conservation. He explained, “We’re in the position of somebody that can’t keep the bathtub full because the water keeps running out. Before we buy a bigger water heater, we ought to get a plug.”

At the same time, they came up with the idea of the Rocky Mountain Institute, located since 2015 in a new Basalt building. The first site was in Old Snowmass.

But, he has critics of his conclusions. One point of contention, “the Jevons Paradox,” suggests instead that improvements in energy efficiency actually would result in an increased energy use due to falling costs. Others say that he is wrong saying 50 percent of all electricity in the US could come from wind by 2050, the number is closer to 30 percent.

When asked how the world of energy discussions and actions has changed from 1976 to today, he mused,” Today, we are bombarded with information from so many different sources. It is often hard to determine their credibility. We don’t know what specific motivations sources may have.”

“However,” Lovins noted, “We can now better forecast the output of renewable energy. As for energy storage, it’s cheaper to store heat and cold than electricity.

The Rocky Mountain Institute, according to Lovins, has grown into a broad-based think tank with 200 staff members. Its stated mission is to transform global energy use to create a clean, prosperous and secure low carbon future.

Today’s energy discussions, he said, can be blocked by those who say, “they have new ideas, but just stopped having old ideas.” Basically, we haven’t needed new inventions since 2010.”

When asked about government impact on renewable energy, Lovins smiled, “Right now around the world corporations are moving ahead with renewable energy projects. Government assistance or resistance is not an issue.”

The institute offered no cost, open source information. “It’s amazing what you can do if you give away all of the credit.”

In November, Lovins announced that he is stepping down as chief scientist. He has already stopped his official CEO duties. “But I will be working as a consultant. This way I don’t have to focus on administrative activities; just on the things I enjoy most.” He has published 31 books and several hundred scientific papers. He has briefed heads of 15 countries

Coventure, a non-profit 501C3 organization, considers itself to be a forum for community communication with local professionals supporting business development in a “conscious capitalism environment, according to Dave Mayer, Coventure board member and founder of Aspen Entrepreneurs.