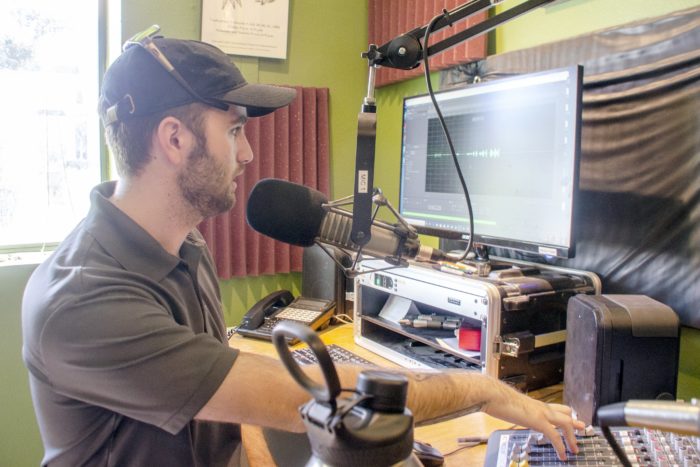 Anyone who tuned into CMC Radio in recent years should recognize KDNK’s new News Director — by voice if not by face. Lucas Turner is a Western Slope native with deep journalistic roots, although he didn’t necessarily intend to get into the business.

Turner’s family runs the Rio Blanco Herald Times in Meeker, and his grandparents did newspaper distribution in the Roaring Fork Valley even before that. His mother worked for the Herald when he was young, and it leaked into his homeschooling.

“Whenever I turned in writing assignments, I got it back with all the markings of a proofreader,” Turner recalled.

But while he was a good writer, his interests veered toward “computers, cameras and eventually recording equipment.”

He made money doing IT work in high school and used to create and edit videos with his friends — from their own version of Star Wars to farcical news broadcasts.

“That’s how I began to learn about storytelling,” he said.

It was the photography program that lured him to Colorado Mountain College, but he changed his mind.

“I ended up in the first week kind of seeing the shiny object of the Digital Media Program,”
he explained.

His first class in what became the Isaacson School was radio production, and it turned out he had the knack for it. When the previous CMC Radio manager was looking to transfer the responsibility, Turner was the logical choice.

“It wasn’t something I had seen myself doing, it was just something that happened,” he recalled.

“My whole background worked together. I was able to keep the station on the air technically.”

Coupled with a position teaching sound design, it gave him a solid foundation in theory and in practice. He didn’t really get passionate about the news end of things until the 2016 election.

“It kind of fired me up a little bit, so I became very interested in politics at that point,” he said. “Journalism really is about holding power to account and making sure that people don’t think they can get away with unethical actions and behaviors.”

Then the school station fell on hard times.

“We lost our studio at Spring Valley Campus because they built a new building. We did end up getting another space, but it wasn’t feasible to drive all the interest back to it,” Turner explained. “My skill set was on getting it technically modernized, but it was under resourced and we didn’t really have any good measurement of our listeners.”

So Turner put his efforts toward podcasting, which he saw as the future of radio. The folks at GlenX’s business pitch competition agreed, and he won $10,000 to purchase microphones, a computer and other equipment to get a podcast production company off the ground.

The year since has been “out of control,” to say the least. He lost a brother in a car accident last fall and signed the papers on a house in Rifle the next day. His son was born in January, and a steady job had a real allure. He had interned for KDNK before, and when the position opened up he applied.

“It’s something I can feel good about doing,” he said. “At the heart of it is ethical, responsible journalism. Small, independent, local media is taking on the mantle of reporting on the things you might not hear in corporatized, mainstream media. If you don’t have someone keeping the electorate informed, you don’t have a democracy.”

In his first week, Turner has felt welcomed by the staff and the community. While he has plenty of ideas for stories, he’s currently focused on learning. You can send news tips to news@kdnk.org and have a good chance of catching him Mondays through Thursdays. He’ll also be at The KDNK Hoot on Aug. 16.

“I look forward to meeting everyone and getting to know this community better than I do already,” he said.