A banner year for local rivers 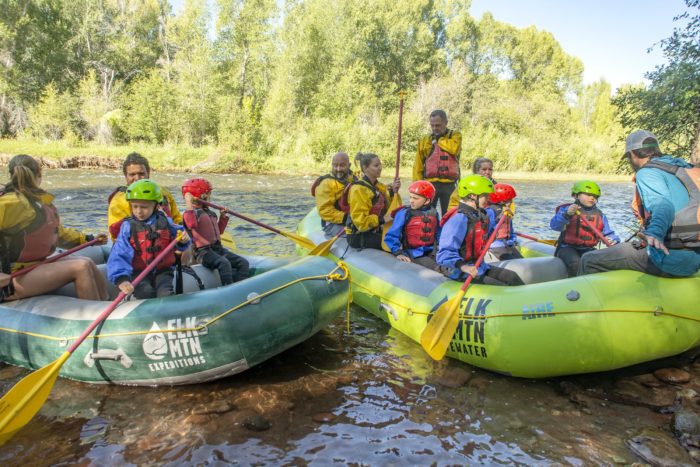 Despite dire predictions, the Roaring Fork, Frying Pan, and Crystal rivers continue to be in great shape for rafting, kayaking, paddling and fishing this season.

Rick Lofaro, executive director of the Roaring Fork Conservancy (RFC), explained, “The robust 2019 runoff due to the historic snowpack, 155 percent of normal, benefits our river recreation.”

He added the massive snowpack and runoff means “we will have a longer rafting season.”

Onthesnow.com reported that the total snowfall for the Aspen/Snowmass region 2018-2019 reached 396 inches, up from the average 300 inches. The 2017-2018 season saw only 233 inches which made 2018 the fourth worst drought on record. The U.S. Bureau of Land Management shows the Colorado basin snowpack was at 511 percent of average as of June 3.

Fishing outfitters like Alpine Anglers are optimistic about the rest of the season. Co-Owner Jeff Dysart said that early in the season, the water was so high and fast that river debris increased and water clarity decreased. The Roaring Fork River was running too high and fast for their waders and floaters.

He noted that visitors make up 75 percent of clients.

Crystal Fly Shop Owner David Johnson noted in their current report about the Lower Roaring Fork River that “Fish are quite happy and hearty after a big runoff and feeding on large bugs.”

According to the RFC, the Roaring Fork River peaked at 9000 cfs (cubic feet per second) July 1, which made for great river running. Now, the Lower Roaring Fork is at 1430 cfs, returning to a comfortable Class II experience.

The Roaring Fork Conservancy was created in 1996 in response to the growing disconnect between people and their environment. The newly built River Center in Basalt serves as a base for educational community programming. It also provides needed lab space water quality testing and river research.

While whitewater rafting does carry some risks, Lofaro added, “Fortunately, no one died this year on any of the rivers we cover.”

However, a few incidents did take place this year. Several rafts flipped in June, but no life- threatening injuries occurred.

Throughout Colorado, the American Whitewater Association reported 12 fatalities so far in 2019. The association statistics show this is above the average annual toll of eight deaths on Colorado waterways each year since 2009.

In a Colorado Public Radio interview, Dave Costlow of the Colorado River Outfitters Association said rafting customers should be upfront about their experience level, use caution and even delay their trip when there are high waters. “They should always be picking a trip that’s appropriate for their skill level,” he said.

River rafting companies must register with the state, pay a $400 fee and agree to inspections to insure they carry the necessary equipment and that their guides meet state standards for experience. In May, Colorado State Senator Don Coram and State Representative Julie McCluskie co-sponsored a bi-partisan bill that continued state regulation of the program until 2028.

“Whitewater rafting is an important outdoor recreation, opportunity for many tourists as well as local,” McCluskie said. “It was important to me that we continue to have a licensing program in place that would make sure our commercial river outfitters were properly licensed and that they were providing the safest experience that they could for any of our visitors.”

As the U.S. Forest Service cautions “Whether a tiny trickle of a creek, enough to cool your toes, or the vast expanses of beaches, water provides an exciting element to outdoor recreation. Even the most seasoned of water enthusiasts can be surprised by changing water conditions. Enjoy your day, but remember to stay safe.”