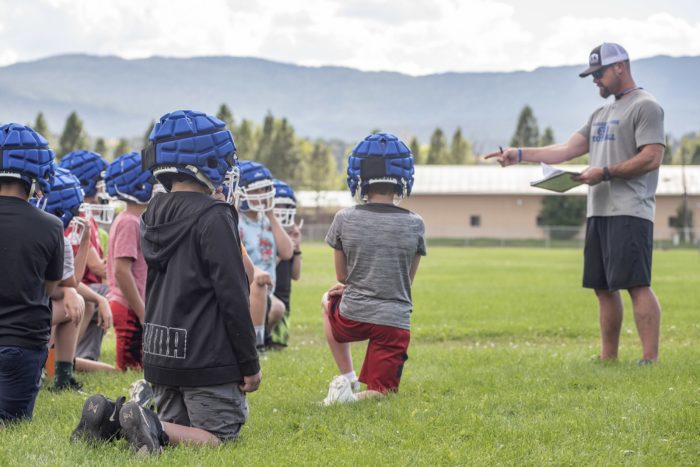 American football hasn’t been most popular sport in town of late, but the newest addition to the Carbondale Middle School coaching staff may prove an extra incentive. As kids picked up their gear for the upcoming season, they were greeted by all six feet six inches and 330 pounds of Trae Moxley, a 2014 graduate of Roaring Fork High School who went on to play football for Colorado State University.

This fall, Moxley plans to help out the team as an assistant coach as he works on preparing himself for his own football season. He and head coach Eric Bollock have known each other for many years, as Bollock worked with Moxley throughout his career as his personal trainer.

As Roaring Fork High School’s football program struggled, Bollock has worked tirelessly to rebuild the Carbondale football program from the bottom up. In addition to his role at the school, he also represents Carbondale for the Mountain West Youth Football League — and he’s already seeing renewed interest there he hopes will trickle up.

“I see the football program in Carbondale as one big unit, that starts at the 3rd-grade level and extends up through the varsity level,” he said. “To have long term sustainable success at the varsity level, we have to build it from the ground up. There is no other way to do it if we want Carbondale football to be a powerhouse once again.”

Having an example of someone local who excelled in the sport certainly doesn’t hurt.

Moxley brings extensive football experience to his coaching position. At CSU, he blocked for an offense that ranked eleventh in the country and first in the Mountain West. The CSU offensive line allowed just 1.0 sack per game his senior year, a figure that ranked fifth in the country. Upon graduating from CSU, Moxley trained for the NFL combine and joined the new Salt Lake City Stallions of the Alliance of American Football, a minor league football team. The league kicked off its 12-week season with Moxley working in the trenches as an offensive lineman. He then went on to play for the Atlanta Legends up until the league disbanded.

This year, Moxley is training with Bollock to prepare for the XFL draft, a new football league aiming to prepare players for the NFL. The season will kick off with a showcase in December, and ideally he will be drafted by one of the eight professional teams participating in the league.  Fortunately for Carbondale’s middle school football team, Moxley will be around this fall with some time on his hands. He looks forward to helping the middle school Rams as a full-time assistant coach.

Moxley is excited about the opportunity to develop not only the middle school players, but also his coaching abilities. He believes that his future could involve more coaching at some level, and the best way to prepare for his future is to develop coaching skills right here at home with Carbondale youth.

Bollock and Moxley bring tremendous experience and enthusiasm to the middle -school Rams. The coaches aim to teach proper techniques to keep the boys safe and develop strong skills that they can build upon over the years. They have designed a practice schedule to minimize the hits the boys would take, and they won’t be practicing in full pads every day. The goal is to teach the boys the proper techniques to play the sport safely.

In addition to years of coaching kids at many levels, Bollock recognizes the importance of good equipment to building a strong program. Bollock has done significant fundraising which has enabled the Rams to invest in new Schott helmets and padding that can be worn over the helmets to help prevent injury. The team also has tackling tubes and a “blaster” that helps kids learn to run with the ball. Smaller push sleds will also help them develop strength and agility. The hope is to have skilled coaches and good equipment to set the program up for years of success. Three additional coaches with experience will also support the team.

Bollock continues to push to raise money for the developing program and has become affiliated with the Cowboy Up Fundraiser, a spirited local celebration of western heritage taking place from 5 to 10 p.m. on Aug. 23 at the Fourth Street Plaza.

Middle school football games will take place on Tuesdays and Thursdays throughout the fall months; interested players should contact evbollock@gmail.com.