Inked — maybe a little late to the party, but here to stay 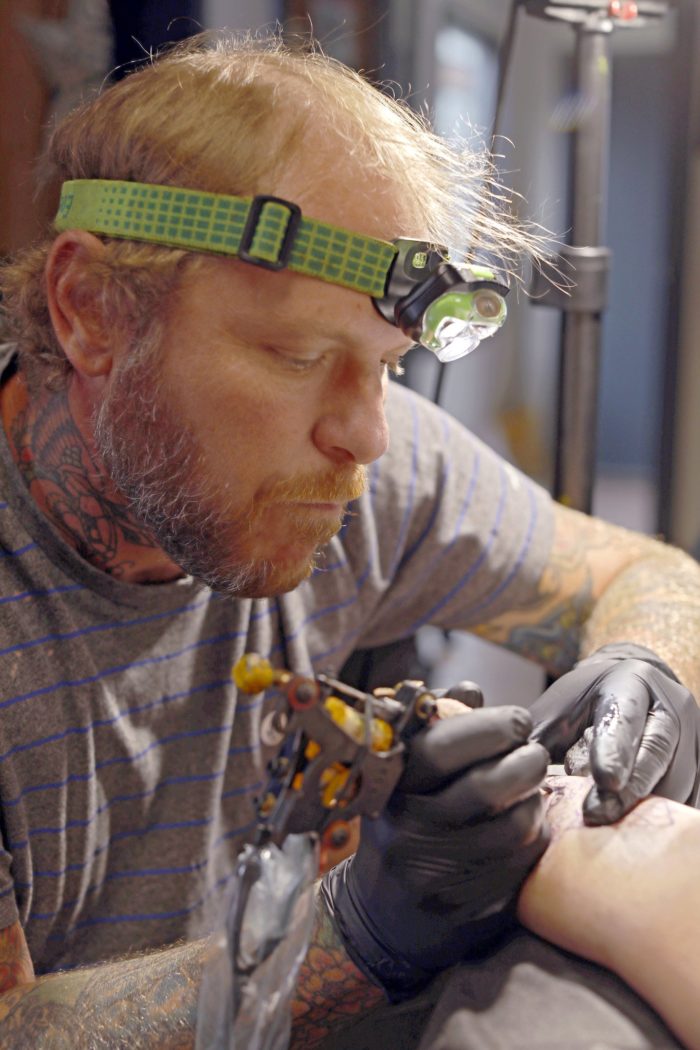 My birthday is in August, and with true Leo fashion, I give myself a present every year. I do that because I know I will always get something I like. That way, it is never a disappointing birthday.

I started thinking of what might be meaningful for my 66th birthday. Last November, I moved to Carbondale from Minneapolis, and I wanted something that made a statement about my new home.

One noticeable thing here is the number of tattoos. Carbondale loves its ink.

I have thought about getting my first tattoo for a couple of years and had a design in mind. It was a lioness. In my mind’s eye, she always had a calm and fearless look. It was an image I gravitated to because it portrayed the opposite of my own reality of dealing with the issues of anxiety and depression.

That is one thing most tattoo artists will tell you. A tattoo is a form of self-expression. It can serve as a mantra of who you aspire to be. It can also serve as a reminder of how you want to present yourself to the world.

In my younger days in the Midwest, I had a 20+ year career in banking. Tattoos were taboo in the conservative work environment, but my banking days are behind me. The more I thought about it, the more I wanted to get a tattoo.

One day, I stopped into Defiance Social Club at 234 Main St. Tattoo artist Matt. E. Hayes greeted me and I asked questions about tattoos. I asked about where on the body it is less painful to get tattooed.  He assured me that fleshy parts of the body and not directly over bones is a less painful process.

I had concerns about how sanitary the process is and Matt said they now use disposable, one-time use only tubes, as opposed to the days when tubes were run through an autoclave for sterilization.

And, yes, I asked the obvious question for someone of my age — what about sagging skin? He said skin does lose its elasticity as we get older, but that it was my decision on where on my body I would want my tattoo.

I talked to my acupuncturist, Dr. Kelsey Cotter of Kelsey Healing Arts in Carbondale, who told me the story of Ötzi the Iceman, whose mummified remains — discovered in 1991 in the Ötzal Alps — had multiple tattoos. Scientists mapped 61 of them. Archaeological evidence revealed that Ötzi, who died in about 3300 B.C.E. at about age 45, had spinal degeneration. The tattoos were organized into 19 clusters and it is believed they demarcated acupuncture points for treatments.

Cotter said there is an unproven theory about tattoos on acupuncture points, stating, “There’s also the idea that if you have something meaningful on the [acupuncture] point, and you know what the point  does for you, it’ll increase the psychosomatic or the placebo element of treating yourself.”

I told Matt I wanted to give him some general ideas for a design. When I got home, I went straight to my laptop and searched Google Images for lioness tattoos. I came across an image I liked — a lioness head inside a geometric shape.

While that was a great start, I still wanted something to personalize it to me. I was searching for something that was totally mine. Then it came to me — my name. Actually, it is my birth surname — Pinette. It is French for little pine tree.

The idea I sent to Matt was a lioness head and a small pine tree within a geometric shape. He contacted me when he had a design and I stopped by the shop to take a look at it. He had captured what I was looking for and it resonated with me. This was a commitment and it was one I was ready to make.

On pins and needles

It all sounds pretty spectacular and confident, doesn’t it? The self-doubt and anxiety kicked into gear the day before my appointment. And it had nothing to do with the design or the idea of a permanent tattoo. My trepidation had to do with not knowing what the pain would be like.

I thought, now what? I had told probably a dozen people I was getting a tattoo and shown many of them the design. My daughter, Abby, was coming from Glenwood Springs to coach me through it, Erin was coming to shoot photographs for the paper, and Will, my editor, was expecting a story from me.

What if I cry like a baby because the pain is too much? What if I say, half-way through, I don’t want to continue? Ugh. Had I painted myself into a corner?

After going around in a circular discussion in my head, logic finally intervened and I realized it was mostly my anxiety steering the ship. Sure, there will be some pain, but you won’t have a total breakdown. Employ the techniques you normally use to get through spots like this — meditation, deep breathing, and relaxing music.

I got myself to a calmer state and the next day, as scheduled, I met up with my daughter and we went to Defiance Social Club. Matt was waiting there and I read and signed the consent forms.

My inner forearm was prepped by Matt washing and shaving the area. I lay down on the table with The Grateful Dead playing in the background. You can also bring your own music if you like.

I let Matt do his job. He has 20 years of tattooing experience, working everywhere from Hawaii, Costa Rica, Panama, and Mexico, to several states across the United States.

The benefit of Matt’s 20 years of experience is he can move quickly and efficiently. The tattooing process, using black ink only, from start to finish, took a little over an hour. Matt said colors, the size, and intricacy of design will factor into how much time it takes to complete a tattoo.

Surprisingly (or not), no emotional meltdown happened. While it hurt, there was never more than a few seconds of pain and then it was moving on to the next detail. Matt told me if I needed any breaks, for whatever reason, to let him know.

The process ended with the tattooed area being wiped clean and a layer of Aquaphor ointment being applied to help keep the area moist and to assist with healing. Matt gave me a sheet of aftercare instructions for the first few weeks. He told me to expect pain, similar to a sunburn, that would lessen over the next few days.

When my daughter and I left, I was on a bit of a high. It happens naturally that your brain’s response to pain is to release endorphins during the tattooing process. It is one reason why many refer to tattoos as being addictive and why some people seek to be tattooed again and again.

When asked about the most common misconception about tattoos, Matt replied, “Tattoos aren’t just for bikers and sailors anymore.” My response is, “Thank goodness for that.”