‘Skeletonized’ scrub oak should bounce back 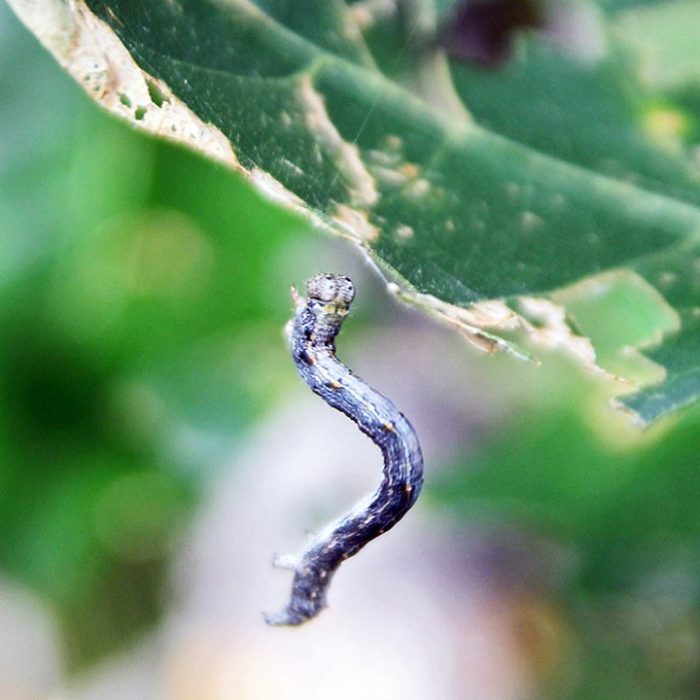 If you take a jaunt, ride or drive up around The Crown this year you may notice several football-field sized, sections of Gambel Oak which at a glance appear to be turning brown. Stumbling upon this sight caused one good samaritan some concern. While Will Fisher was running a (literally) breathtaking 19-mile loop around The Crown he could not help but notice the abundance of discolored oak brush. Fisher documented his observations and put them out to the virtual world of Facebook via the Roaring Fork Trail Conditions’ page, in hopes for answers.

Fisher’s post triggered some discussion and proliferated an uncertainty of what could be causing this strange, surely out of season, phenomenon. Some onlookers suggested a fungus, others a disease and one seemingly satirical assertion was that the brush is “infested with lazy parasites.”

Taking a closer look at the affected shrubbery one will see that the leaves are not turning color, but are indeed infested by a small worm like creature. Doug Leyva, a Timber and Fuels Program Manager for the National Forest Service, classified the species as an Oak Looper (Lambdina Punctata). Leyva has a degree in Forestry and is a certified Silviculturist — a specialist dedicated to the development and care of forests.

On any given oak tree in one of the affected areas there are countless numbers of loopers lurking and gnawing away at its leaves leaving a skeleton behind. Standing still in the vicinity one can hear the Oak Loopers feasting and slithering in unison. When pushing through the thick of the affected brush dozens of loopers will fall on a passerby creeping down the back of their neck inducing moments of panic. It feels like being in a “Stranger Things” episode.

While overlooking one of the leafless groves Leyva observes,  “…it’s spreading up over the top there. You have some varying shades; from the very top of the ridge there’s dark green, then you can see it get, what we say, skeletonized, on the leaves that are coming down to where those loopers have really been active.”

The Oak Looper is a native species to North America and according to Leyva should not cause serious concern just yet. Loopers are present every year. As Leyva puts it,“ If you look around enough in the oak brush you’ll find some every year but the populations will ebb and flow — they’ll spike some years.” That said, Leyva has not seen this extreme of an impact by the Oak Looper in his 15 years with the Forest Service.

Leyva said it is hard to determine what exactly caused the population increase this year but it could have something to do with an early spring. When there is an early spring the Looper has more time before the next frost to continue to spread and multiply. Hilary Boyd, a Wildlife Biologist with the Bureau of Land Management office in Silt, isn’t ready to give answers just yet but said, “something happened this year for them to have a population explosion.” The Oak Looper is merely a defoliator, meaning it only goes after an oak tree’s leaves, not the trunk of the tree. Therefore, the skeletonized leaves will fall in the autumn and green leaves will still flush out in the spring.

Luckily, Gambel Oak is a hardy host. As Leyva points out, “When [The] Lake Christine [Fire] came through last year we had a lot of top die back on the oak brush and they leafed back out.” Gambel Oak is often the target of prescribed burns throughout the Roaring Fork Valley because it is so pervasive.

By contrast, the Spruce Budworm — a close relative to the Looper — has caused experts concern within the area. According to the Colorado State Forest Service (Colorado State University) website, 3,800 acres of forest were affected within Garfield County in 2017 by the Spruce Budworm. Because Spruce trees are coniferous they will not replenish foliage every spring like the Gambel Oak. Leyva says a big concern with Spruce Budworm is when they attack “the smaller trees which then don’t have the ability to come back as easily.” Similar to the Oak Looper, the Spruce Budworm lays its eggs by letting down a long strand of webbing which often leaves its larva on young trees near the forest floor.

If the Oak Looper were to continue to come back in the same location with such ferocity year after year, it is possible to begin to see some “die back.” However, Leyva does not think this will be the case and that this is just one of those years where the Looper population has spiked.

Hilary Boyd has worked in her position with the BLM office for five years. In that time, Oak Loopers have not been on her radar… until now. In fact it is the talk of the BLM office in Silt; everyone from the receptionist to the fuel manager are intrigued and raring to dig for answers. Personnel from their office have collected samples and begun research.

While these little creatures may seem off putting and more destructive than usual this year, they are a natural part of our ecosystem. That said, it’s worth keeping an eye out next summer to see if the defoliation is equally as extensive.