Weaving together a can’t-miss exhibit 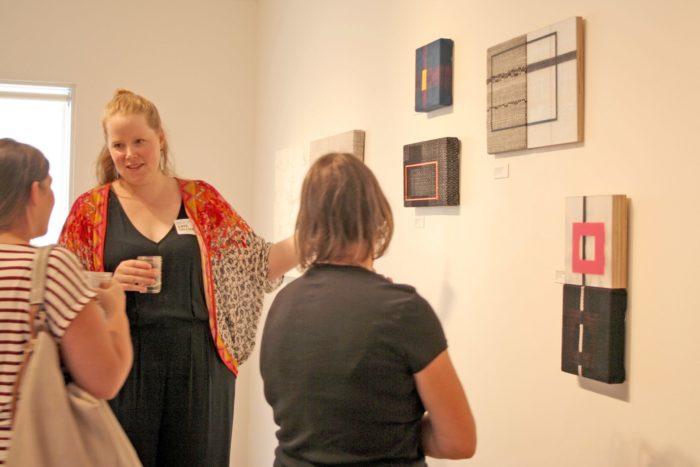 What does the pairing of painting and textiles have in common? Everything, it seems, at the latest dual exhibition at the Carbondale Arts’ Launchpad galleries.

Crocetto uses the seemingly simple medium of cloth. She manages to twist and turn this simple medium into a phenomenal landscape of art. While her techniques include stitching, dyes and unstitching, the results are truly wondrous. The piece, “Grand Valley I” is a masterpiece.  It presents an aerial view of the Grand Valley. The cloth manages to present a depth and complexity that is seemingly impossible from mere cotton and silk. The stitching alone is a complex maze of tiny stitches that make up a larger composition. Additionally, the piece is colored with pigment and acrylic, giving it the layered look of the desert landscape. The effect creates an amazing depth and level of complexity.

Crocetto has created stunning works of art each as complex and interesting as, “Grand Valley I.” Many of her works include found objects. As a whole, the exhibit encourages the viewer to engage with nature and the surrounding landscapes, especially the desert. Crocetto states in her artist’s statement that, “textiles have a history of carrying narratives.” It is evident from her works that she is a storyteller in her own right. The works each tell their own story of nature and convey emotion to the viewer. This exhibit is truly emblematic of the Post-Frontier Landscape.

In contrast, the exhibit pairing Cate Tallmadge and Andrew Roberts-Gray offers a juxtaposition between weaving and technology. “LOOM” features primarily pairings between Roberts-Gray and Tallmadge that each are focused on women who played an important role in science and mathematics. Each painting was started by Andrew Roberts-Gray and then completed collaboratively. This process resulted in a seamless transition between the pairs of canvases. According to a Carbondale Arts press release, “Ada Lovelace saw the correlation between the punchcards used to program a Jacquard loom and its future application in computing.”

This exhibit makes the connection between the loom and technology indisputable. Roberts-Gray’s painting utilizes layers of circuitry that create complex and repetitive patterns. Tallmadge meets the patterns and continues them into a weave. One piece not only matches the pattern of Robert’s Gray’s painting, but then also has an overlapping dark element, as if a dark powder has covered the composition. The result is a striking piece. Tallmadge creates entire works of art from a loom. The weaving is a complex art piece that has multiple layers and depth. Roberts-Gray’s paintings feature geometric patterns using primarily acrylics.

Other collaborations between Roberts-Gray and Tallmadge feature a single canvas with Tallmadge creating a base textile weave and Roberts-Gray layering a bright, geometric shape on top of it. The composition is interesting and unusual.

Both the “Post-Frontier Landscapes” exhibit featuring Julia March Crocetto and the “LOOM” exhibit featuring Cate Tallmadge and Andrew Roberts-Gray are tied together through the use of textiles. The contrast between the focus on landscapes and nature to technology, science and math is thought-provoking. Both exhibits have strong roots in the patterns and methods of textile creation. It is a distinction that is subtle and as a result that combination works well. This is a can’t-miss exhibition. The exhibits are on display until Sept. 6 at The Launchpad (76 South Fourth Street).