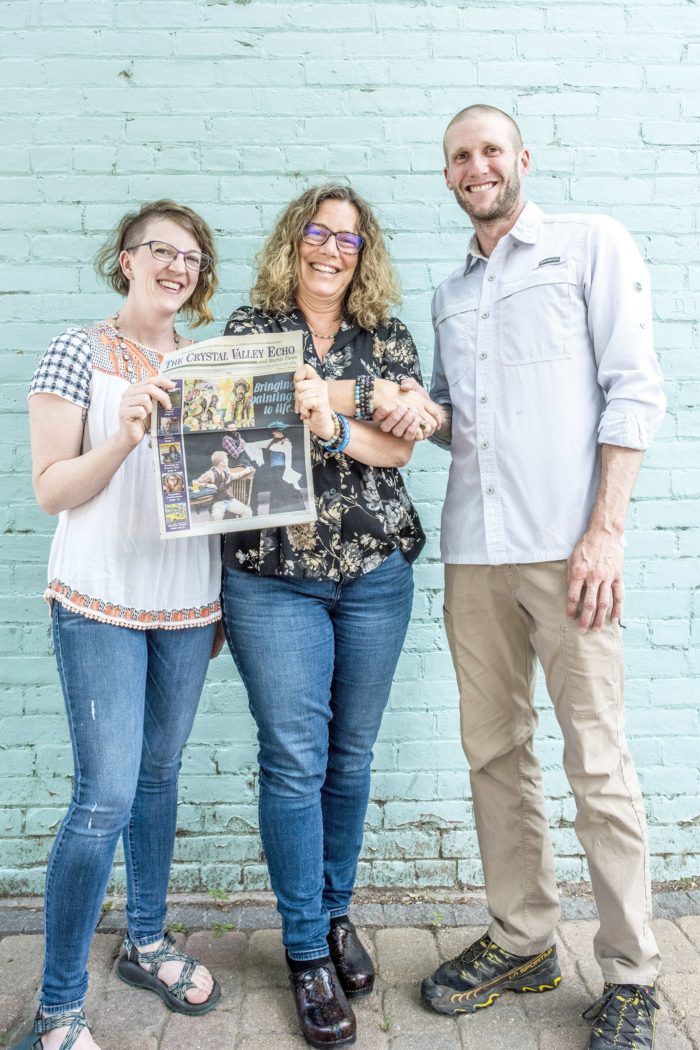 The passing of longtime Crystal Valley Echo reporter Sue McEvoy was a major blow for the little monthly newspaper.

“She made producing The Echo really easy,” noted publisher and founder Allyssa Onmacht.  “I don’t live up there anymore, and I don’t have my pulse on the community like she did, so it really solidified my sense that it was time to move on.”

But Onmacht thinks there’s as much need for a regional community voice now as there was when she took over the Marble Charter School’s xeroxed Marble Times and decided to make it into a real newspaper.

“I kept at it from a business end maybe longer than a more money savvy person would have done,” she observed. “I needed to find the right people to take it on, and there they were.”

Gentrye Houghton has a journalism background and has written stories for the echo off and on since shortly after she arrived in autumn 2012 on an editorial internship for Rock and Ice magazine.

“By the end of it, we decided we wanted to integrate into this community and not go back to Texas,” Houghton explained.

“We” meant her husband Ryan Kenney, who later joined her in Redstone and contributed some photos to the Echo over the years. When McEvoy’s health began to deteriorate, the couple began to step into the void.

“The Echo wouldn’t be today what it was without Sue McEvoy. It’s a voice to our community. It’s not the hard hitting news, it’s the life and the stories of the people who are living up in the Crystal River Valley,” Houghton said. “In a world where we have so much despair… it’s an important reminder about how much good is happening every day. It’s a heart; it’s a pulse.”

Not that it pays all the bills. Houghton will still make most of her money as a massage therapist. Luckily, their roots are already firmly in place.

“We’ve definitely become more permanent over the last year. We bought our own place, and I’m the manager of the Redstone Water and Sanitation District,” Kenney said. “We’ve always kind of had to rely on each other to get projects done that we wanted. This is something we can pull together under what we’re already doing.”

Don’t expect any immediate changes, except perhaps for an increased social media presence. Houghton’s main goal is just to keep building on what made it a community fixture in the first place — to the point that she knows of at least one person who interlaces reading the Echo and The Wall Street Journal just to keep sane.

“It’s so loved,” she said. “People are really excited that it’s not going to die.”

“We really want to continue the same community feel with the heartfelt stories you can use to take a break from your daily life and reconnect.”

To reach The Echo, email echo@crystalvalleyecho.com.