Music by the light of the moon 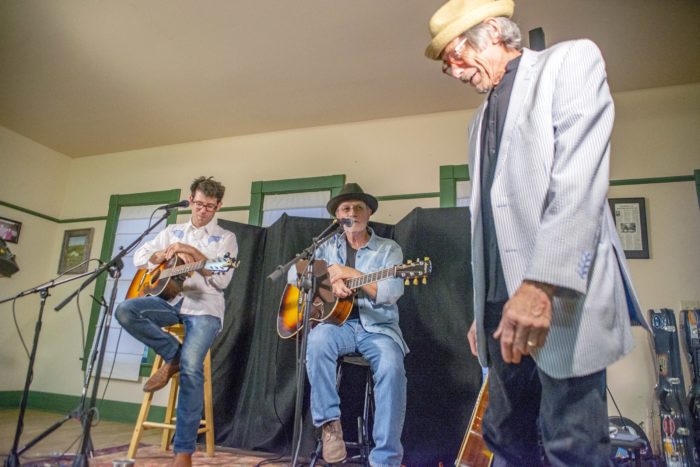 Under the soft glow of a full moon, the Missouri Heights Schoolhouse seemed to sway gently to the lilting sounds coming from within.

Americana musicians Jackson Emmer and David Starr performed for a crowd that clapped and sang along enthusiastically. Starr described the program as a song swap; each musician sang his own music intermixed with the other performer’s tunes.

Starr explained “Americana” is a music genre combining country, folk, rock and bluegrass into a unique blend of today’s popular sounds. Jackson said songs keep him up at night, as he combines humor, heartache and exploration in his “whiskey-smooth” conversational style.

The Missouri Heights Schoolhouse on CR 102 was built in 1917 but closed its doors in 1956. Completely restored by 2002, the schoolhouse remains an active gathering place for community meetings, socials and festive dances.

Rolling Stone Magazine said of Emmer, “Few are writing songs” like he does. Among his 100 touring venues yearly are Telluride Bluegrass Festival, House of Blues in Houston and the Rocky Mountain Folks Festival in Lyons.

But, Emmer joked, “If you want to be a musician, you’ll need a few good part time jobs.”

He recalled sneaking into bars through the kitchens to perform, as he wasn’t old enough at 18 to drink alcohol. Now, of course, he enters the front doors of his venues.

Emmer lives in Carbondale and often records at the Diamond Ranch Studio. In May 2019, he released a single from a recent session, “Home is on the Road.”

Emmer’s latest album, the 2018 “Jukebox,” includes “Hot Mess,” “Dreamers and Fools” and “Time.” He mused that writing and recording Jukebox felt like “every note could not be mistaken for anyone else’s music.”

Starr, an 18-year resident of Cedaredge, owns  “Starr’s Guitars.” The store specializes in a wide variety of vintage, new and used guitars and bluegrass and folk instruments.

In his Missouri Heights show, Starr sang the title track of his upcoming album, “Beauty and Ruin,” a haunting melody. Starr performance also included “Night Rolls Around,” “Edge Of The World,” and “Don’t Give Me Hope.” The new album, produced in collaboration with Woody Creek’s John Oates, will premier June 2020.

Oates said Starr “has a voice you will never forget. His music is authentic; his songs are honest, full of emotion and truth.”

His most recent album, the 2018 “South and West,” drew inspiration from both Nashville and the high mountain deserts of Western Colorado. Starr records primarily in Nashville. The album will premier June 2020 at the new Grand Mesa Arts Center in Cedaredge. The lead single, “Don’t Give Me Hope,” can be downloaded.

Sadowsky came to KDNK several months ago after a 15 year tenure on KAJX-FM in Aspen. He also emceed the Telluride Blue Grass Festival for many years.

Both performers have recently toured around Colorado, but each is heading out of the state for a while. Emmer is travelling to California and Texas, while Starr has concerts in England and Scotland.

Touring is a major part of a musician’s lifestyle with its particular difficulties.

Emmer described his favorite parts of touring. “I enjoy sharing music with audiences, singing with people and enjoying the collective, analog ritual of live performance.”

The downsides, he said, are “trying to maintain a healthy diet and getting enough sleep every night.”

Starr dislikes “the traffic in big metropolitan areas which can be pretty tedious for a small town guy like me.” He does enjoy “getting to see new places and meet new people. I’m always amazed at how kind people generally are just about everywhere I go.”