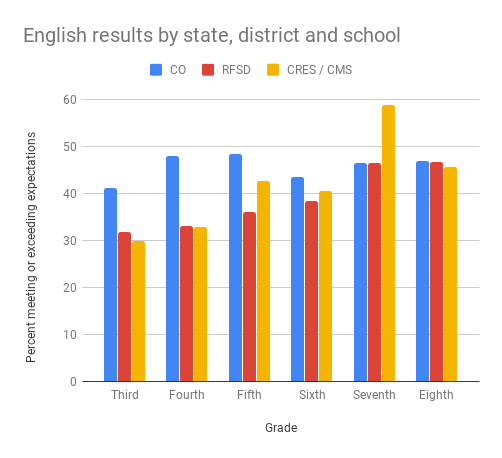 Not all students perform well on standardized testing, but Carbondale Middle School (CMS) is seeing growth across the board.

That’s according to Colorado Measures of Academic Success results released last week. While science and social studies are also assessed, perhaps the most comprehensive results are those for English language arts and math, which track students every year from third through eighth grade.

Comprehensive results were not available for schools with small student populations — both to protect student privacy and because such data sets are prone to significant fluctuations. Consequently, it’s difficult to make a side-by-side comparison of Ross Montessori with Carbondale Community School.

There are clear contrasts with Colorado at large and previous years, however. While the statewide percentage of students meeting or exceeding expectations in language arts has improved at every grade level since the first administration of the tests in 2015, more than half of test takers still didn’t hit that mark. On the math front, third graders around the state improved year -over-year, while sixth grade proficiency declined — and again, less than half of students met expectations.

CMS exceeded the Colorado average in both subjects at almost every grade level, with particularly strong showings in eighth grade math and seventh grade English. Moreover, the school trounced the median level of growth on almost every front.

Growth measures the success of students year-over-year, with 50 representing the state average. Carbondale Middle as a whole scored 63 percent in English and 64 percent in math. Better still, the figures ranged from average to well above across demographics. Principal Jennifer Lamont believes emphasizing the habits of a scholar and hand scheduling to ensure appropriate instruction contributed to that success.

“You have to be really careful to meet everyone’s needs, and we feel like there’s a pretty good balance.” she said. “We have a really strong student body that works hard, and we want them to take it and run.”

Statewide, achievement gaps of about 30 percentage points across all grades persist for students who qualify for free and reduced lunch benefits. Similarly, a total of 60.1 percent of white fifth-graders met or exceeded expectations in the 2019 English language arts assessment compared with 31.5 percent of Hispanic students, a gap which has remained relatively unchanged for five years.

The latter may account for some of the discrepancy between Carbondale Middle School’s stellar scores and a sub-par showing at Crystal River Elementary School. According to CRES principal Matthew Koenigsknecht, it typically takes four or five years for a student to grasp a new language well enough to be accurately taught and tested in it.

“I think they do amazing work at the middle school, and I also believe we set a really strong foundation for our kids,” he said. “It’s a predictable timeline for our ELD students to get caught up with their non-ELD peers.”

Far from making excuses, he sees the achievement gap as a major challenge to be tackled.

“That has been our reality and also something we’ve been working hard to reduce. We have seen that writing has been a struggle, and it touches many different aspects of learning,” he said. “I think that we have amazing people in place here and a lot of great systems and structures. We have to acknowledge that there’s work to be done and we’re ready to do it.”

“I can point to a lot of other data that shows the strong experiences we’re able to create for our kids,” he said. “We’re also here for social-emotional learning.”

“It was really important for us the past few years to prove ourselves. It’s a good indicator of where our students are, but our goals really have to do with engagement,” she said. “I think if you work on that, the rest will come.”