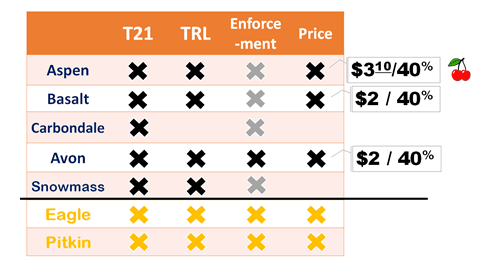 The Town of Carbondale is expanding its hard stance on tobacco with licensing and a flavor ban following a public hearing on Aug. 27.

The decision comes a year after trustees opted to increase the consumption age to 21, and may be followed by a tax increase early next year. For Mayor Dan Richardson, the sense of urgency is building to combat youth vaping.

“The more I learned, the more I dug in, the more I experienced on the home front, the more I felt it just wasn’t enough,” he said of past efforts, which deliberately stopped short of licensing. The issue made it back on the agenda after a presentation by Pitkin County Tobacco Specialist Risa Turetsky in June. Now, with a draft ordinance all drawn up, it was time for others to have a say.

First up was Brian Fojtik of the National Association of Tobacco Outlets, who made the trip up from Denver to voice opposition to banning flavored tobacco from pipes to e-cigarettes.

“I would encourage you to do the licensing, do the compliance. I think taking away an effective tool to help adult smokers to quit smoking is harmful to public health, not helpful,” he said. “All of the products affected are vastly different products. They are consumed in vastly different ways.”

The sole other opponent, who identified himself only as Matthew, emphasized the value of e-cigarettes in his own smoking reduction, and questioned the lack of feedback or involvement from those with direct experience.

Most of the rest who chose to speak came from backgrounds of education or public health.

Roaring Fork High School Principal Lyn Bair questioned the characterization of e-cigarettes as safer, noting that the misconception is particularly prevalent among students.

“I think if the Town can adopt some strong measures, that would really help us in terms of the education and restorative justice… so we can get this out of the schools.”

In addition to submitting a letter signed by Roaring Fork School District leadership, Superintendent Rob Stein also to the opportunity to respond to Fojtik.

“We really have to balance how big of an onramp we’re willing to build for addiction in order to help people cease usage,” he said.

Both Stein and Glenwood Springs Mayor Jonathan Godes praised Carbondale for being ahead of the curve and bringing the issue to broader attention.

“I think as a region we’re all on the same page and I think it’s the correct page,” Godes said. “I think now’s the time to potentially go a little farther than you potentially feel comfortable with.”

“Our rates locally are close to three times the national average, and that is just unacceptable from a public health standpoint,” she said.

That actually presented an opportunity in Trustee Erica Sparhawk’s estimation.

“A lot of state or even national policies start at a local level,” she said.

And while Richardson was impressed by the polite presentation of the opposition, he said he was more inclined to trust local data and take a risk — even if it meant dialing back someday.

• Mayor Richardson will be attending Representative Tipton’s listening session in Rifle, to which the press was specifically not invited.

• Town Manager Jay Harrington received his annual evaluation, with Trustee Lani Kitching pushing for a merit raise beyond the standard staff cost-of-living increase he has historically accepted — to be revisited in the budget process.