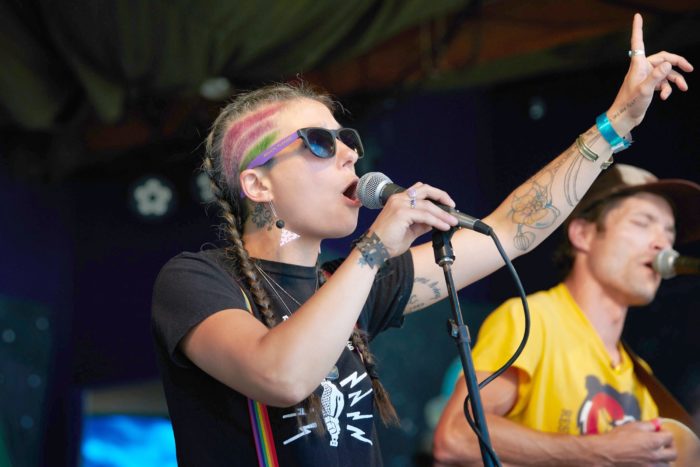 The Sun is conducting a series of interviews with folks you may not have seen in the paper before – a sort of introduction to your neighbors. This week we caught up with Kenna Steindler, a fixture at Dos Gringos Burritos, one of the founders of the local musical group Callin’ Old Souls and a board member of the Andy Zanca Youth Empowerment program.

Q: Tell us about your family.

A: My mom is Flash, and she’s been on the radio pretty much since KDNK started. My sister lives in Glenwood and just had a pair of twins, who were born at Valley View just like we were. My father passed away 17 years ago. We’ve been here for a little while.

Q: How and when did you start to find your own identity?

A: I always tried to carve my own groove away from my mom, because everybody knows her. When I was in high school my mom always tried to get me to be in youth radio, and not doing that was sort of my way of being a rebel — although I ended up getting involved eventually. When I graduated high school I was going to move to Oregon with my sister, but I only made it out there for a month or two and ran out of money and couldn’t find a job. I came back just fell right back into the same job at Dos.

Q: When did you start there?

A: When I was 16. When I came back I just sort of took over as manager and Nelson and I kind of ran the place together. I think being at Dos has really helped me become established. I have a sense of home there.

Q: How have things changed in the time you were there?

A: The amount of business we have, you can tell how big the town it is now. When you’re out on the street, there isn’t a moment without someone passing you walking or on their bike or in their car. I was a pretty angsty teenager — out of control would be a good way to put it. Now it’s weird because I like to wake up early and do a lot of yoga and exercise.

Q: Why the decision to move on at the end of the month?

A: I’ve kind of grown as much as I can there. I quit drinking about seven months ago and I think I finally realized I can do anything I want. We have free rent and I realized it’s the time in my life I don’t need to be making a lot of money. And the band has been doing more shows.

Q: How long has the band been together?

A: As we are now as a five-piece, it’s been about a year. We took a few months off after we recorded the album and then we booked a bunch of shows for the summer. September is probably our busiest. My husband William and I are playing at Beer Works for First Friday, then the whole band will be at Native Son the next Friday, then the Brew Garden the next Friday and a wedding that Saturday, then Marble Distilling the Friday after that and then Batch and the Nugget that Saturday. We just love what we’re doing, so it’s pretty exciting.

Q: What do you think people enjoy about the band?

A: We’ve got about three hours worth of original music, which I think some people like. We also have a sound with a little bit of country — but not too country — as well as rock and roll with some electric bass and some mandolin to keep it bluegrassy. It’s hard to put your finger on, but it’s different.

Q: Where did the name come from?

A: We had a friend, Collin Bashant who passed away a few years ago in a car accident. So it’s kind of a pun that William’s step mom came up with to put his name in there. We really like it.

Q: What are you up to outside of work, music and KDNK?

A: I have three dogs, so there’s a lot of walking that happens in my life. I like to trail run, too. My blue heeler is about 12, so he doesn’t run with me anymore, but the other two are young pitbull mixes, so they can handle it. Then there’s my new nieces — they’re about five months old, so I’ve been helping out with that as much as I can, which is pretty cool.

If you know of someone who should be featured in Our Town, email news@soprissun.com.