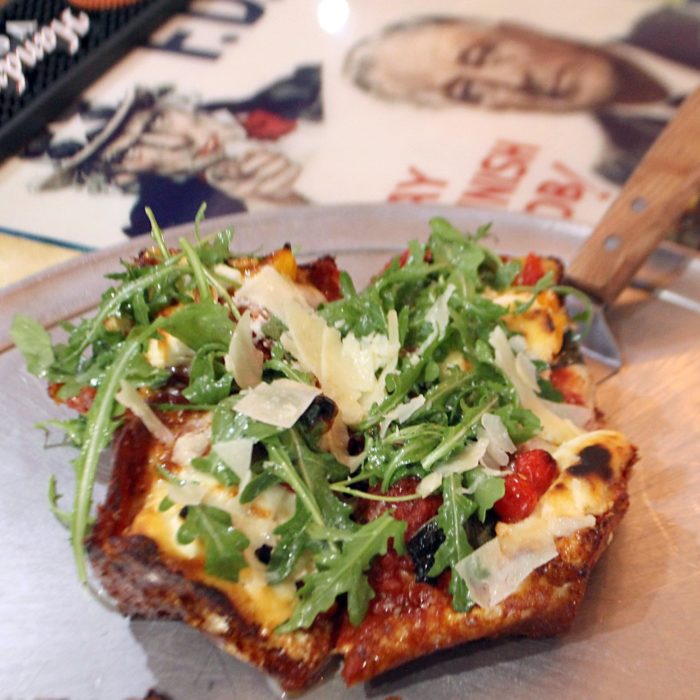 The time has come. Propaganda Pie in Redstone has opened its doors to pizza lovers everywhere.

Only, you do not even have to be a pizza lover to enjoy this delicacy. What is pulled out of their oven is enough to make a food critic’s mouth water…

Propaganda Pie is owned by three best friends: Nial O’Connor, Stephen Horner and Ryan Vinciguerra. They consider each other as brothers. The same brotherhood owns Slow Groovin in Marble and Snowmass. With the success of both the Slow Groovin locations combined with their love for pizza there was no stopping this pizza revolution (pizzalution) up The Crystal Valley.

What makes Propaganda Pie unique, apart from its stellar setting, is the type of pie they’re serving up. After traveling to different parts of the world and testing out varying pizza trends the team decided Detroit style was the ticket. Detroit style pizza is similar to Sicilian style pizza in that it is square and made in a deep dish but the crust has its own design. Horner explained that applying garlic butter to the bottom of the pan creates a “fry bread kind of base which is real crispy on the bottom,” he goes on, “the dough is light and airy through the middle and is topped with cheese first — heavily on the sides — creating a caramelized cheese crown around the whole pie when it’s done baking.”

While visiting Detroit, Horner got the chance to eat at a pizzeria called Buddy’s, the birthplace of Detroit style pizza. The first Detroit style pizza was cooked in a blue pan borrowed from a local automotive factory which used the same pans to sanitize workers’ tools. Horner explained, “the story goes the owner got his hands on one of these pans and thought, ‘hey this is a heavy duty pan, it’d be great for baking’…and so Detroit Style Pizza was born.”

Propaganda Pie has ten specialty pies each with its own twist. The “Barbeque Bandwagon” pizza ties in their original barbecue recipe from Slow Groovin; made with smoked brisket from their headquarters in Marble. Horner was proud to say this particular pie has, “been a huge hit and it’s like a barbecue pizza you can not get anywhere else.”

While the Bandwagon is a smash hit their other pies are likewise nothing short of impressive. Each pie comes out of the kitchen hot with robust smells and colors of various fresh ingredients. Carbondale local Mike Burgart was cycling his way back to Carbondale from Crested Butte and stopped in for a bite. Burgart had the “Hold the Meat” pie and said he was “surprised” and that “ it really hit the spot.” Besides pizza, they serve sub sandwiches, tantalizing hors d’oeuvres and have a full bar.

When you walk in the front door your attention is drawn to old pro-war propaganda posters. If you venture a bit further inside to the dining area you’ll see contemporary anti-war artwork, mostly pieces by Banksy.

Their slogan, “serving the people” speaks to their theme as well as the fact that they are serving pizza to the people. Their emblem is a fist which as Horner points out can stand for “unity, solidarity and power and is used across the board in propaganda.” The logo is also inspired by a famous statue of a fist in downtown Detroit dedicated to professional boxer, Joe Louis, who spoke out against civil injustices in the 20th century.

Aside from the amazing cuisine the location is right on the Crystal River in downtown Redstone, in the old Crystal River Club Cafe building. There is restaurant seating right along the river bank. Their goal is to create great food and a fun atmosphere and setting for people to enjoy. Take it from the owner, Horner, “we’ve got an arcade, a pool table, the Crystal River and the Redstone views…come hang out, relax, you’ve made it to your destination.”

These fellers do not have the intention of competing with other pizza joints in the Valley. That is partially why they decided to go with something different. As O’Connor puts it, “we don’t want to beat Peppino’s we just want to offer something different; get you out of town, up here to the river and try this different style of pizza that you may or may not have had before.” Besides, what’s a pizzalution without allies?

On July 31, Propaganda Pie threw a pizza party for “The Boulevard” meaning all of the locals living on Redstone Boulevard. The pizza was free and the bar was opened for the first time. On Aug. 2 they had their grand opening and its success point to a promising beginning. Judging by the crowds and satisfied customers, business is booming and growing. Get on over to Propaganda Pie and try something new.