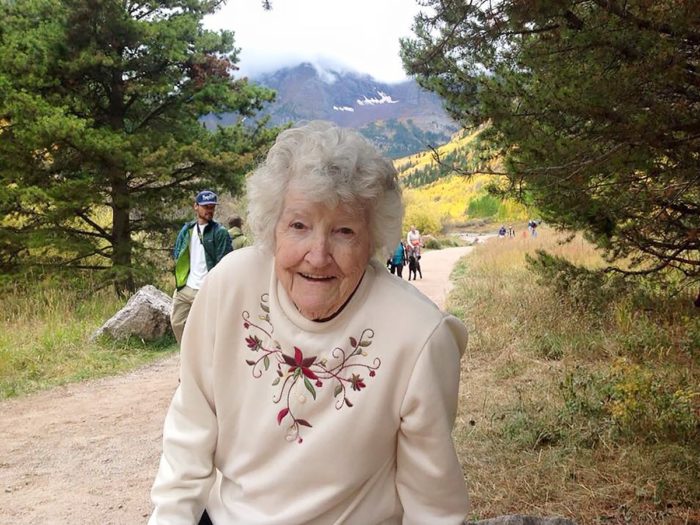 June Nightingale passed away surrounded by family on August 13, 2019, in Durango, CO. She was 85.

She was born Anita June King in Wellington, TX on January 14, 1934. She grew up in Childress, TX and after graduating, she moved to Paonia, CO with her family. There she met and married Leonard ‘Tiny’ Nightingale. They had five children and settled down in Carbondale when Tiny got a teaching job.

June had several jobs including working at a bank, running Nightingale’s Grocery in Carbondale, waitressing and selling real estate.

June was an adventurous spirit. She loved to travel and visited Europe, Asia, Australia, Canada, Mexico, the Mediterranean, the Caribbean and even went zip lining in Belize at the age of 76. She was an avid reader, enjoyed doing puzzles on her iPad, and in her younger days she played golf. Her favorite pastime was playing Bridge.

She enjoyed spending time with her family. Nothing brought a bigger smile to her face than her great grandchildren Brayden, Addie and Summit.

A celebration of her life will be held in Paonia at the home of Claudia King on Sept. 28. In lieu of flowers, donations can be made to the hospice or a charity of your choice.