Ram sports getting off on the right foot 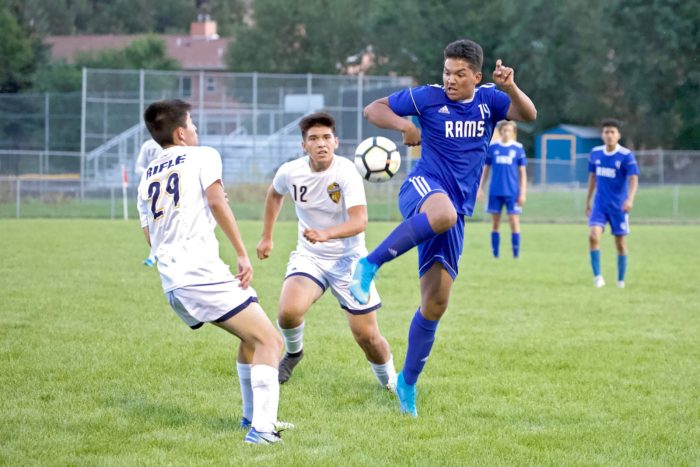 As Roaring Fork Ram volleyball girls play their first home game on Sept. 14, the soccer boys will take on one of their toughest rivals on the road.

The season is young yet, but both teams have had a chance to get a feel for their lineup and consider the competition.

Despite losing a slate of seniors from last year’s stellar season, the soccer team is looking strong with a 4-0 record.

“I think it’s motivating them to really work hard and be a collective effort,” coach Nick Forbes surmised. “They play more with each other, and it’s really fun to watch and we’re getting the same results as last year.”

Their Sept. 10 victory over Rifle — a top-ranked 4A school — was a particularly promising litmus test, although it didn’t come together until the second half. The upcoming game in Delta will tell even more as league play really gets going. The 3-1 Panthers will likely be keeping a close eye on Ram sophomore Ross Barlow, who leads the league with eight goals already this season (although Delta’s own Martin Corral is just one step behind).

“It’s usually a classy game that’s played hard and in the right spirit,” he noted.

Things never really let up through Halloween, with tough games against Aspen, Basalt and Coal Ridge coming in quick succession.

Forbes hopes that the decision to set varsity games at 6 p.m. will allow parents, schoolmates and members of the community to come out and support the team. Last year, with the school’s American football program sticking to junior varsity, a soccer game became the venue for crowning homecoming royalty.

This year, the volleyball girls will have that honor during their Oct. 4 game — sans the four wheelers but without fear of inclement weather.

The girls, incidentally, have yet to play a league game but are 2-2 overall following the Soroco Tournament and a 3-2 away game against Rifle. Hosting Olathe will give the girls a chance to test their mettle on their home court. For second-year coach Karen Crownhart, the score isn’t the main metric she’ll be watching.

“I’m not really pushing the outcome so much as the process of how we play and how we show up every game,” she said. “We have a really strong league, and I do really believe that we are contenders, but there’s also that mental part.”

That doesn’t mean she doesn’t see the girls as contenders.

“The game has changed a lot since when I coached before. Kids are a lot more skilled now,” she observed. “On any given night, every team is different, so you never know what’s going to happen.”

In addition to cheering the Rams on at games, folks can support Roaring Fork athletics by participating in the Ram Classic Golf Tournament, with a shotgun start at 9 a.m. Friday, Sept. 20 at River Valley Ranch. $100 per person or $400 per team gets you 18 holes and an array of contests, not to mention a raffle, BBQ lunch and awards ceremony after. You can also sponsor a hole for $250 — call 355-3554 for more information.