Caught in a vortex at Dan Bern concert 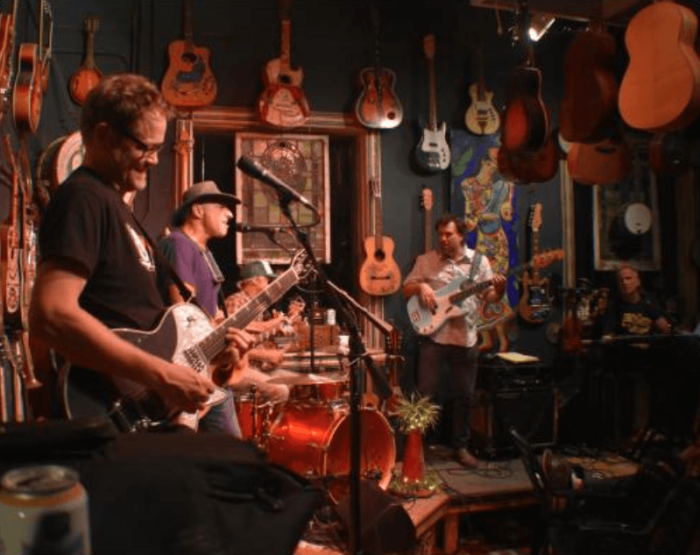 Steve Standiford established Steve’s Guitars as an intimate listening room in 1993. The colorful room bursting with musical paraphernalia, trinkets and, of course, guitars in every nook and cranny has hosted a great variety of performers over the years — a lot of talent has come through the painted green doors on South Fourth Street.

But now and then an act comes through that really makes magic. The room becomes more like a family room, and you feel you’re hanging out with friends. You see firsthand how music makes the world a better place. It’s so good, you can’t believe you had to put only 20 bucks in the fishbowl on the barstool at the door.

The concert was part of Bern’s tour to promote his latest album Regent Street, released Sept. 13. The Steve’s Guitars show was historic in its own right: It was the first reuniting of the IJBC after 16 years.

“Everybody’s still alive, which is a miracle in itself,” Bern joked as he introduced the band to the audience.

Albuquerque singer/songwriter Carlos Trujillo opened with some introspective ballads and guitar strumming before IJBC took the stage. I think it was bass player Schey who introduced a little blues riff. Coffin naturally added to the rhythm, followed by the rest of the band. It was a groovy and catchy rhythm, and I couldn’t tell if it was a warm-up or the first song of the set.

Bern started talking, greeted the audience and introduced the band. The jam continued, building to a crescendo, then concluded for what must have been four or five minutes of tasty jamming. I wondered: Have they really not played together for 16 years?

It wasn’t the first time Bern had played in the Roaring Fork Valley. He surmised that he played at KDNK in 2003 when he was in the valley for an Aspen show. A couple years prior, the band was in Glenwood Springs.

The last time I saw Bern was at the CRMS Barn in 1999, when he was promoting his album, “Smartie Mine.” He played solo, and his poetic lyrics, impassioned harmonica playing, acoustic-guitar-rich melodies and storytelling made me an instant fan. One of my all-time favorite songs, “Chelsea Hotel,” is off that album.

The Sept. 12 set list included a mix of new work off of Regent Street and older pieces going back to the late ’90s. The bluesy, finger-snapping “Regent Street” had a New Orleans-style jazz feel at times, thanks to Masisak’s playful but precise keyboard playing. Bern’s well-known “Jerusalem” was as powerful as ever, and there was no hidden message in “Take the Guns Away” (also off Regent Street). “Black Tornado,” off the older New American Language, was especially moving. The melody is strong, and the lyrics poignant:

“And everything is changing faster than I can describe

I look for love

There is a tombstone

Of my father I visit sometimes

And there’s a black tornado…”

I’m guessing the song has something to do with Bern’s roots. (Don’t they all?) He grew up in Iowa, and his father was a classical pianist. But classical music didn’t speak to Bern. He listened to The Beatles and was influenced by Dylan, Guthrie and other balladeers. Bern played the cello until, at age 14, he got his first taste of Dylan and traded in his cello for a guitar. “Everything almost immediately made sense,” he told KDNK deejay Terry Glasenapp on air earlier that day.

As the concert came to a close, the audience did not let the band get off so easily. The standing ovation, enthusiastic applause and yells prompted an encore. They played The Beatles’ “I Want To Hold Your Hand” with Bern singing in German.

When I went to see Bern’s concert, I didn’t plan to stay the whole time. (I wanted to catch a couple of the new songs and see him backed by a band.) But it was too darn good.

Sedona, AZ, is known to have vortices with energies that can bring healing and self-exploration.

Well, Bern and the IJBC created a Carbondale vortex that night at Steve’s Guitars; something cosmic was definitely in play. Bern — who is honest, raw and humble in his lyrics and poetry, as well as when speaking on stage — would probably brush it off and say, in a thoughtful drawl, “Well, maybe … But we were just playing music.”