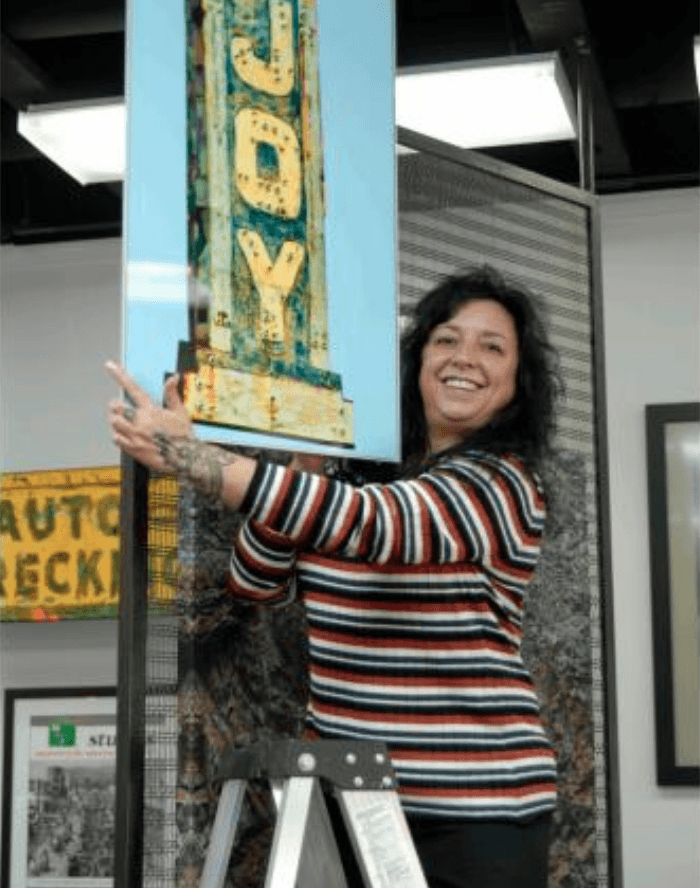 The Sopris Sun regularly presents a series of interviews with folks you may not have seen in the paper before — a sort of introduction to your neighbors. This week, we caught up with Debbi Fadli, 51, who for several years has worked as chief marketer, merchandise creator and other roles at photographer Martin Garfinkel’s Roadside Gallery, 320 Main St. in Carbondale. In her position, she comes up with endless merchandising applications for Garfinkel’s photographs of roadside neon signs and other art and even arranges occasional classic car rallies along the street outside the store.

Q: Give a quick history of your life — where were you born and raised, where have you lived, a description of your family (kids, siblings, parents, ancestry).

A: I was born in Fort Rucker, Alabama, but didn’t live there long, and I’ve never been back. My family is from Rhode Island, I was raised there and went to school, but when I began to get older I went off to New York to be a designer. I met some Moroccans, there, and we hung out together … I was dating one of them for about a year, and then we went to Morocco to meet his family and we had a big Moroccan wedding. I have one son born in Morocco (Hamza), and a daughter born on U.S. E. Coast (Savonna). I lived in Morocco for about 15 years, and my parents weren’t happy about that. But I came back to the U.S. and ended up in Colorado, which is one of the only states where you can be a resident after three months.

Q: How did you end up in Colorado?

A: I was familiar with Colorado, I had been living in Leadville at the age of 5 when my mom and dad and my whole family all moved to Leadville. There wasn’t any work in Rhode Island, you see, so dad (and half his family) all came to Colorado so they could work in the Climax molybdenum mine. I went to school there, just a little bit, but (after) the mind had closed, we went back to RI, and then later I came back here, first to Glenwood for a short time, but I kept coming up to Carbondale and after a while I moved here.

Q: If someone recognizes you on the street, where might that be from?

A: I had a little hostessing job (in a local restaurant), it was my first job after moving here in 2005. Then in 2010 I had opened a restaurant on the west side of Main St., the Crystal River Cafe. It lasted just shy of 3 years. So a lot of people recognize me from the restaurant or cafe, and say hi. But for the last four years, I would say it has to be from the Roadside Gallery.

Q: How did you come to work at the Gallery?

A: After I closed my restaurant, I was helping a friend in Glenwood, with his store. But I had peeked in the window of the Roadside Gallery and noticed he had pictures of Mt. Sopris, and I just love Mt. Sopris. And the photographer, Martin Garfinkel, he would eat at my restaurant, it was just next door. So one day [the gallery] was open, and I came in here to buy some coasters, and I asked him, how come you’re never open? And he said, well, I need a little help. So I said, I’m going to help you. And I’ve been here almost four years, and we work great together, and he is one of  the most humble people I’ve ever met. And I’ve worked my way up to being the director of the Gallery. I do a lot of designing, which is art – there is a lot of merchandise, which I design and I think of as art.

Q: Are these creations mostly your ideas, your inspirations?

A: Before, it was mostly just his art, framed. But we’ve become a creative district here in Carbondale, and a lot of people are thinking outside the box. So we’ll try something, create something, and if it works out we’ll go with it and if it doesn’t we’ll move on. But all the creations here, along with his fine art and photography, have really worked out. And, although I’ve never been a writer, I do a lot of writing here. I write blogs about the pictures, he has photos from back in the days of film, in black and white. It’s interesting and it keeps our website going.

Q: How do you spend your free time?

A: A lot of my free time is spent with my kids. My daughter loves cooking, we like to experiment, and my friend goes back to Morocco every year and brings us back some spices. And we joke around. English in my house is sometimes a third language, so it can be Arabic, English or French here all in one sentence, depending on which kid I’m yelling at. My kids very much grew up in this valley, and they love it. They like the diversity in Aspen … my son gets to speak French and things. And I like to explore these other little towns and areas, because Colorado is so interesting and so beautiful. So in our spare time my daughter and I take little road trips.

Q: Who would you say has influenced you the most?

Q: What has been your most satisfying experience?

A: Number one is that I’ve been a good mom, that’s a big satisfaction in my life. And another is that photographer Martin Garfinkel is getting better known. He’s been doing this photography his whole life, and for someone at his stage in life, to still be at it today is amazing. His art is in California, and in Vail and in so many other places, and I’ve helped him accomplish that.