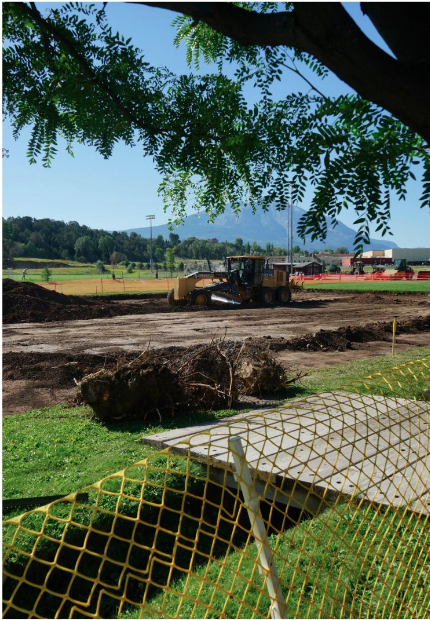 To meet the growing interest in what NBC news recently claimed is the fastest growing sport in the world, the Roaring Fork Pickleball Association and town of Carbondale broke ground early this month on the construction of six new pickleball courts at the North Face Park on the south edge of town.

The 1/4-acre site, next to the tennis courts, skate park and athletic fields on Meadowood Drive, will be home to six new post-tension courts that adhere to size guidelines (minimum 1,800 square feet) for sanctioned tournament play.

“With these new courts and the existing makeshift courts, we’ll now have 12 courts available,” Roaring Fork Pickleball Association (RFPA) member Jim Noyes said. “We’ll have the biggest pickleball facility between Grand Junction and Arvada. We are going to be able to stage some of the biggest tournaments on the Western Slope.”

The six new courts have an estimated price tag of $300,000, according to Noyes, who is heading up the fundraising campaign. The town provided land for the new courts, but all of the money has been raised by the RFPA. The association has garnered $240,000 in private donations and foundation grants to date and is still in the midst of its fundraising campaign. Early architectural design work was done pro bono by Jeff Dickinson; Satank builder Jeff Wadley is handling the general contracting on a voluntary basis; and landscape architect Rich Camp also provided expertise at no cost.

In terms of construction, Wadley says the courts are a fairly straightforward project.

Evergreen Tennis Court Systems based in Loveland will do the post-tension concrete work, and the prep work and post work (sidewalks, reinstalling sprinklers, re-seeding grass) will be completed by the town or local contractors who bid the jobs.

As of Sept. 12, crews had cleared out a rectangle to fit the 11,439 square feet of post-tensioned concrete plus room for new sidewalks around the courts. (A patio area with benches and shade will be available to all park-users and is part of the design plan, but not part of phase 1 fundraising.) The soil will be compacted, brought down to grade, the court footprint filled in with substrate, and concrete poured for the courts.

In spring 2020, the courts will get surfaced with a high-tech epoxy finish and be ready for play. The grand opening is scheduled for June 2020, when the association also aims to host a large tournament.

Wadley said the association will still have access to — and will need — the existing tennis courts for pickleball tournaments.

“At tournaments, we can have up to 150 or 180 players per day, so we’re going to need the hotels and the restaurants and everybody in the community. I’m working with the chamber of commerce to raise awareness about our new amenity,” Wadley said.

MAKING DO FOR TOO LONG

The Roaring Fork Pickleball Association has more than 115 members from New Castle to Aspen, according to Noyes, and the number of people who play pickleball or want to learn how to play far exceeds the number of courts in the area. The nearest dedicated pickleball courts are in New Castle, which were built about one year ago, but there are not enough courts to host tournaments.

Currently, the Roaring Fork Pickleball Association has access to the three existing tennis courts adjacent to the bike and skate parks at the North Face Park. The court size for pickleball play, however, is smaller compared to tennis and requires different court striping and net dimensions.

Plus, Noyes said the condition of the tennis courts is terrible. The courts used to be an inline hockey rink, so they sit on two slabs of concrete which has caused a lot of cracks to form. Additionally, when the town added striping for pickleball about six years ago, some measurements were wrong and resulted in extra lines on the court. That has created what Noyes described as a kaleidoscope.

The existing tennis courts are reserved for pickleball Mondays, Wednesdays and Saturdays, and for each session, the association has to set up nets. The group keeps six portable nets, which cost roughly $300 and weigh 30 pounds each, that members haul out of storage and set up for their scheduled times on the tennis courts.

“Essentially, if we’re starting play at 8 o’clock, we’ll come over at 7:30 and start setting them up. Generally speaking, I can set up a court by myself in 15 minutes, but just do the math; that’s one and a half hours of man hours to basically set them up,” Noyes explained. “I wouldn’t call it a big burden, but it’s a real nuisance.”

Because the nets are portable, they’re also lower quality than if they were permanent. Noyes says they get beat up and lose their rigidity, then are not at the right height.

Finally, Noyes noted that the existing tennis nets pose a safety hazard due to their height for pickleballers who might back into them and topple over.

Those courts are reserved for pickleball on set days and times, and on Saturdays there are consistently three times as many players as there is court availability. Noyes said it’s not uncommon to have 50 people playing on Saturday.

“We put 5,000 player hours on those courts between May and September last year, and that number will be higher this year,” he said.

Noyes says the lack of courts limits newcomers and diverse players from trying the sport.

“We are really inhibited here because we are playing on temporary courts that we overflow with, so we never invite anybody else to come and play. Basically, it’s become like a snobby little club because we don’t want new people to come because we’re already at capacity,” he said.

Surrounding communities have also caught the pickleball bug and have converted their tennis courts and basketball courts to accommodate the sport, according to Carbondale Recreation Director Eric Brendlinger. Yet he admits pickleball wasn’t a high priority in the town’s recreation master plan in 2015.

“We were land-poor and amenities-rich, so we didn’t have a place to put it. But it was mentioned in the master plan as something that would exist in the future because of the national interest in the sport,” Brendlinger said.

“It’s the fastest growing sport nationally. That’s a data-driven comment, but we’ve seen it here. There must be something in the water. Once people play it, they literally want to play it all the time. They get addicted.”