Town goes back to the future with trash collection 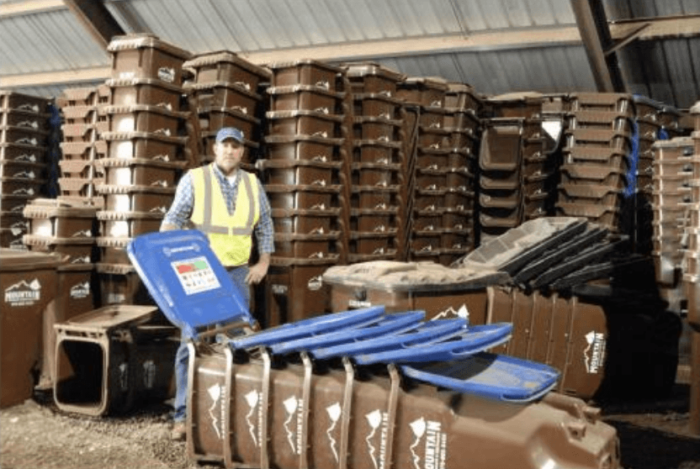 On Oct. 1, Carbondale will be taking a step back to the future, as the town gives up on a quarter-century experiment with multiple companies picking up trash from local homes and apartment buildings.

After nearly a decade of discussion, the town has been working feverishly for two years to institute a new single-hauler system that will cover almost all the households in town in hopes of reducing traffic and noise on the streets of Carbondale, step up its diversion of trash from area landfill sites, and provide better protection for wildlife, mostly bears, that annually drift into town to forage for food in local dumpsters.

Along with the usual trash and garbage that comes from local households, the new system will include recycling services, but composting will not be part of the overall service, according to town officials.

To take on all this work, the town’s board of trustees this year contracted with Mountain Waste & Recycling, which is now owned by Waste Connections, which Public Works Dir. Kevin Schorzman said is the third largest trash hauling company in North America.

Headquartered in Texas, according to the company’s website, Waste Connections bought up Mountain Waste earlier this year and has been actively working with the town to get the new trash-hauling system into place, according to Schorzman and Sherrie Hall, a town finance department employee who will be overseeing the new system from Town Hall.

Town officials stressed that, as the new system rolls out, there will be a 60-day period of adjustment when households can figure out what size of dumpster or trash bin they require to meet their needs, and contact Waste Connections to have the appropriate container brought to their property.

The company for some time has been switching out older containers bearing the names of the three previous waste hauling companies that have been picking up trash around town over the years.

But, noted Schorzman and Hall, once that 60 days is up, at the end of November, any changes requested by households will come at a cost.

Neither official was quite sure how many of Carbondale’s roughly 2,300 households are signed on at this point, though Schorzman estimated that perhaps 70 percent of the town’s population is behind the switch to a single-hauler system.

Though, noted Hall, there have been some doubters, mostly from residents upset that the town is getting involved in what they feel should be left to private enterprise.

“I’ve gotten questions from some people,” she said with a chuckle, “such as, ‘When did this town become socialist?’ You hear these things from people, and I say, ‘Well, it goes back to FDR, I think,’” referring to President Franklin D. Roosevelt, whose New Deal legislation and other initiatives helped pull the country through the Great Depression of the 20th Century.

As for costs to the consumers under the new system, Schorzman stated that in the core commercial and residential areas, “this is having the effect of lowering the bill.”

But, he added, “It’s not like everybody in town’s going to see their price drop.” He said that people living in multi-family complexes of more than 8 units cannot, by state law, be regulated by the town’s new trash regime, which means that multi-home complexes must negotiate their own pricing deal with Mountain Waste & Recycling.

And in some cases, Schorzman said, it is likely that the price of services will be slightly higher than under the old system, due to a new billing arrangement known as “volumetric pricing” — “the more trash you generate, the more you pay,” Hall explained.

The idea, she continued, is to encourage recycling as a way of reducing the volume of trash going to area landfills, which theoretically can reduce the price of service.

Schorzman emphasized that there is no law that tells households to sign up with any one company, although if someone declines to sign up under the town’s new deal, they will still be paying charges on their utility bills to cover the town’s hauling contract expenses.

Town officials assured local residents that the switch to a single-hauler system should not be disruptive, and that the town will, separate from the trash collection services, continue to put out large dumpsters in the vacant lot at 4th and Colorado to collect leaf and grass clippings (every two weeks), and to recycle Christmas trees after the holiday season.

In addition, the town will continue to hold its annual household hazardous waste collection day, this year scheduled for Oct. 26 at the 4th Street vacant lot (for more, see the Public Works page of the town’s website).

Anyone wanting more detailed information about the new trash collection system can go to the town’s website (www.carbondalegov.org) to find contact information for Schorzman or Hall; look around the homepage and click on the link for “Town Waste Hauling Services;” or talk with the people at Mountain Waste & Recycling (970-963-3435).