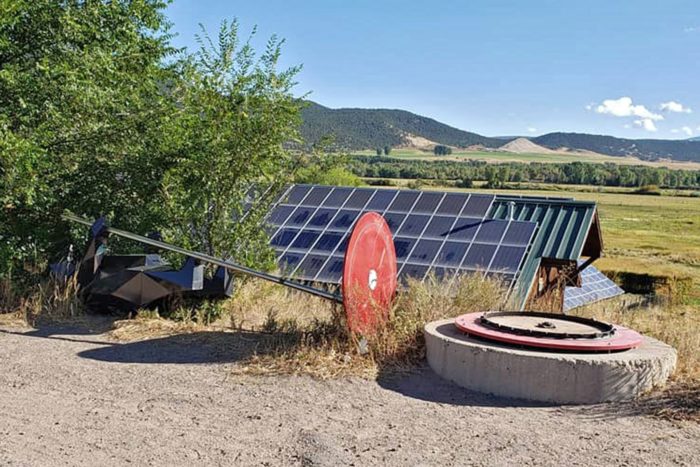 When Emerson received an Instagram message on Sept. 20 that his blue bear sculpture by Delaney Nature Park had been knocked down, he wasn’t altogether surprised.

Back in art school, he’d heard stories of people trying to run off with art. And Carbondale itself has had several incidents of such vandalism — a tiny horse removed by Thunder River Theatre, some birds snipped by Fat Belly Burgers, another set of horses maimed at Snowmass and Main. But Emerson’s piece, installed at his own cost on a piece of private property, was sturdy enough for folks to swing on it.

“I was kind of blown away that this much effort had gone into trying to remove it,” he said. “It was almost put down as if someone was trying to take it somewhere else.”

With the help of a friend with a bucket loader, he was able to remount the bear. There’s a dent in it and it doesn’t spin anymore, which he’d fix if someone were to buy it (contact him on Instagram @booandfinni),

Despite the setback, he doesn’t regret his decision to place the piece in public.

“No one was going to see it if I hadn’t put it somewhere. I have so much sculpture in my garage that’s going to be there until someone wants to show it.” he said. “It only takes one person to make it a bummer. Most people really enjoy it. Everybody who drove past while I was fixing it were pretty bummed out and wanted to help.”

For his part, Carbondale Police Lieutenant Chris Wurtsmith sees the trend as a troubling one.

“Artists pour their heart and soul into something, and now they’re exposing it to the possibility it will be destroyed,” he said. “Having so much public art work in Carbondale is a reflection on our town, and we really have to depend on each other. We need everybody to be eyes and ears.”

Anyone with information about the incident can call Carbondale Police at 963-2662.