Meet the ghosts of Potato Days past 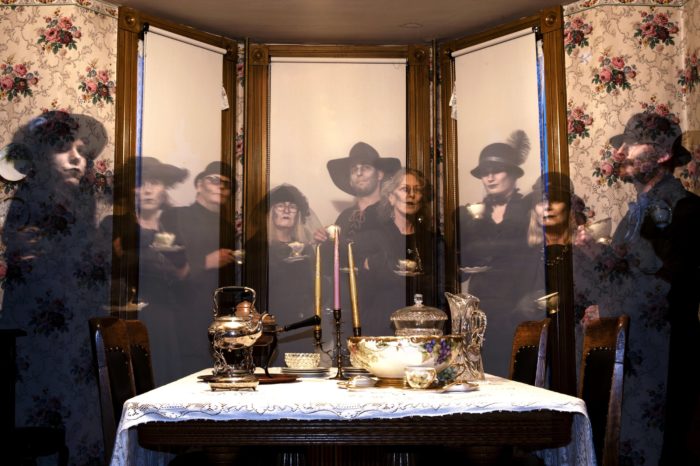 If the Thompson House isn’t already haunted, it certainly will be on Oct. 5.

In conjunction with the ghostly theme of this year’s Potato Day, The Carbondale Historical Society is jumping right in to October with a ghost walk at the nationally-registered building next to Triangle Park. While Hillcrest Cemetery was long considered and even publicized as the venue (the Town later shut down the plan citing “logistical issues”), Historical Society President Sue Gray thinks the house will prove the right choice.

“I think it adds another dimension that we wouldn’t have had at the cemetery,” she said.

The Thompson House is, after all, one of the oldest and grandest homes in Carbondale, preserved with all its original contents. And while the cast of characters were originally limited to those in the old part of the cemetery (it may still be worth the trek to visit their graves before or after the event), Hattie and Myron Thompson can now hold court as well.

Guests will circulate through the house at 15-minute intervals between 6 and 8 p.m. on Oct. 5 — tickets are $10 per person at carbondalehistory.org. After hearing from the specters of some of Carbondale’s chief characters, they’ll have a chance to mingle on the enclosed porch. No food, drink or dogs are allowed, although supervised children are welcome. It’s not really intended as a spooky affair, but rather a enjoyable and edifying encounter with history — and a last chance for folks to view the house for the season without making an appointment.

“It’s our only fundraiser of the year, really, but more than the money I think it’s important to connect the community with the historical society and museum,” Gray said.  “I had way more fun doing this than I thought it was going to be, just because the people involved are so enthusiastic and really taking on the roles. I think if you know how your town was founded, why and by whom, you have a more complete idea of the character of the community and how it’s evolved.”

These particular characters — Samuel Bowles, Sarah Jane Grubb, William Dinkel, Edna Sweet and the Thompsons — all have connections to potatoes, in particular.

“Potatoes are what put Carbondale on the map originally,” Gray explained. “It’s how we fed the miners. Then our potatoes became famous across the country. That lasted from around 1900 to the 1940s.”

Bowles supposedly grew the area’s first potato crop from peelings in his ranch along the Crystal River (then called Rock Creek) just down from the Grubb place. Eugene Grubb would later literally write the book on potatoes, but Sarah Jane will also tell you about the accomplishments of her other children.

If the event were at the cemetery, William Dinkel’s grave-sized tombstone would steal the show. His started his fortune by bringing flour through deep snow over Independence Pass during a shortage in Aspen. He helped run the first stage stop, post office and bank in town and is widely regarded as one of Carbondale’s chief founders.

Sweet managed the Dinkel Mercantile Company, helped form the Carbondale Study Club for women and authored the book that informed most of the ghost scripts: “Carbondale Pioneers – 1879 to 1890.”

Myron will give the scripted overview of the Thompsons themselves, starting with the cabin that now acts as the Historical Society headquarters and moving through the stages of house construction, though it will likely be up to Hattie to finish the tale.

Or, well, that chapter. Many of the characters’ descendents are still here and active, and there’s a whole new crop of farmers, as well.

Indeed, the Potato Day Committee has partnered with Sustainable Settings in hopes of bringing local potatoes to the big barbecue lunch — assuming the harvest is successful.

Folks will have a chance to start the day off early with the Marmot Mile at 7:30 a.m., with cowboy coffee and vendors in the park beginning at 9 a.m., the parade down Main Street at 10:30 a.m. and lunch and games in the park beginning at 11:30 a.m. with live music until 3 p.m. and including several school bands. The Youth Gymkhana originally planned for the afternoon has been canceled.

Gray hopes the whole range of events will continue to engage multiple generations with the Historical Society.

“We have children up to retired people in our parade, as well as the ghost party,” she noted. “I’m pleased that the younger generations are becoming interested in the history of Carbondale and participating in our events. I think they just add a new energy.”

To get involved as a volunteer, member, or board member, email info@carbondalehistory.org. You can also register for Gray’s Colorado Mountain College class from 6 to 9 p.m. Oct. 10 at the Lappala Center.