Mister Kitty and Mushu go out on the town 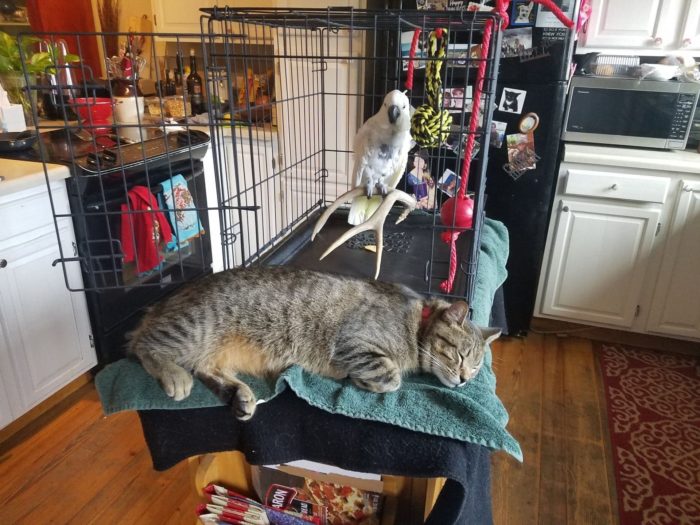 When Eloise Clark moved into town after living in a rural section of County Road 115, she worried a bit about how her cat, Mister Kitty, might adapt. She needn’t have.

Clark and her sister got the stub-tailed tabby as a kitten from Brett Varr, one of two men who drowned in Ruedi Reservoir last summer, and trained him to come sprinting back to the sound of a cat food tin opening. But her new living situation a block off Main Street was a very different environment for the now two-year-old tomcat.

“He was very skeptical at first,” Clark recalled of the first month or so. “He’d never been around so many cars passing by, loud noises and neighbors close by. Slowly I would let him play outside on his own and he’d follow Donna’s cat, Miss Kitty.”

He soon began to expand his travels.

“I’ve lost him a few times ‘cause he sleeps in other people’s homes and they don’t notice till the next day that he’s there,” Clark explained. “I got calls on him daily, sometimes five times a day,  I always had to repeat myself: ‘just let him out, he’ll find his way.’ I wrote ‘do not feed’ on his collar, I have his name, my number and address saying ‘I know where I live, thanks.’ Thats cut down the calls quite a bit but that could be mainly because everyone is starting to get familiar with him.”

Indeed, Mr. Kitty has become something of a fixture downtown, and is well known to the folks businesses several blocks away.

Mushu the cockatoo, was slightly less well known before he popped up at the Near New a few weeks ago, prompting a social media hunt that ultimately led back to Clark. He also goes out in public under escort.

“It’s like having another person living with you. I go on bike rides with him, take him to friends’ homes to hangout with, Robert has skateboarded with him… I’m sure I surprised a few people but I’d walk around town with Mushu on my shoulder and Mister Kitty following me like a dog,” Clark said.  “I only have him in the cage when I’m not home or I’m cleaning the house and can’t keep my eye on him… You leave the room for a second he starts screaming. He’s like living with a toddler. If he’s out of sught and quiet that means he’s destroying something by chewing it to bits.”

With plans to start a family on the horizon, Clark recently gave Mushu away to a friend who lives near Catherine Store.

“Natasha lives on a ranch and is always home,” she explained. “She’s always wanted a big bird. Mushu and she are perfect together. I don’t have to think twice about her care for him and I can see him anytime.”

As for Mister Kitty, while he got along with Mushu and will likely miss him, there are plenty of other friends around for company.