Review: Not just a walk in the park 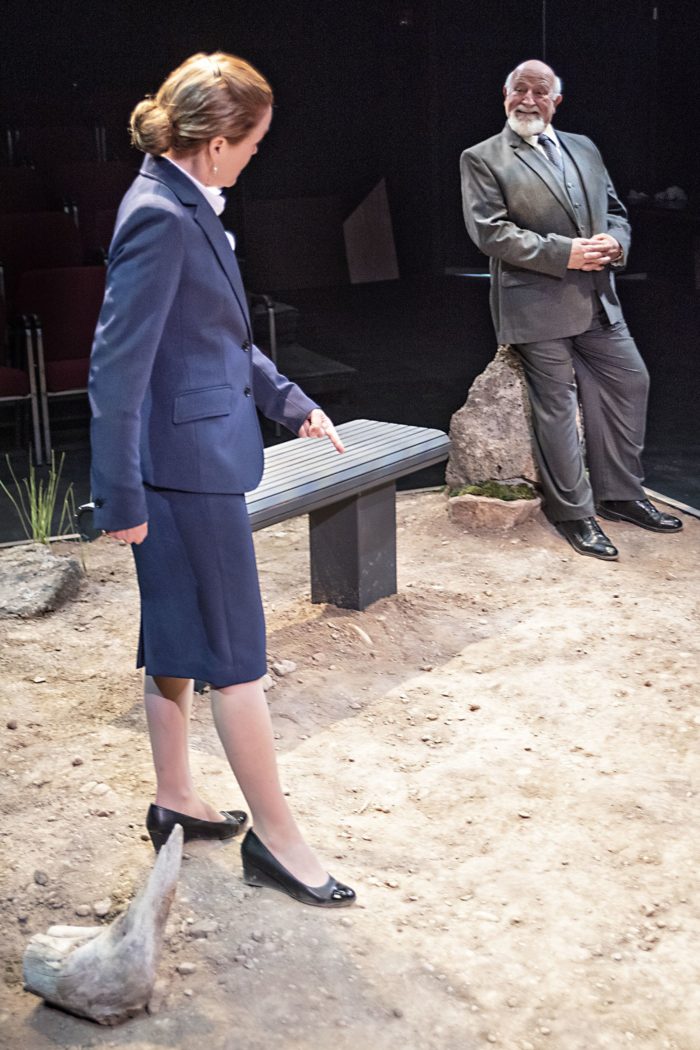 As the United States still stands on the brink of nuclear war after the nearly 75 years since the bombing of Hiroshima,Japan, at the end of World War II, live theater in Carbondale rises to the challenge of portraying echoes of history as today’s reality.

The production of “A Walk in the Woods” at Thunder River Theatre Company (TRTC) brings the past, the present, and the future together dramatically. The play, written by Lee Blessing in 1986, is masterfully directed by Corey Simpson, TRTC’s executive artistic director.

Set in a forest near Geneva, Switzerland in 1982, this two-actor play keeps the audience riveted by both the dialogue and the cat and mouse game between Russian arms negotiator Andrey Botvinnik (played by Bob Moore) and American arms negotiator Joan Honeyman (played by Wendy Tennis). These negotiations, the play explains, have been going on for years, perhaps decades, with little or no movement on either side.

Or maybe it’s instead a cat and cat game, as both characters appear ready and willing to extend or retract their claws. Walking in the woods calls to mind a peaceful stroll in nature. But, that’s certainly not the case here.

As the play begins, Botvinnik seems the jolly, friendly and welcoming antithesis of Honeyman, the stern, no-nonsense American. The bucolic setting is limited to a bench, a few stumps, rocks, dirt and fallen leaves. That’s it. No more, save when Botvinnik describes the surrounding countryside. The only change in this scene is as the characters change outer garments to reflect the changing seasons — except at the end of the play, when Botvinnik finds a lovely white flower representing spring.

Spring flowers are often associated with hope, but that doesn’t apply to arms negotiations proposals in this play. The only hope depicted comes from these two individuals learning and growing and, yes, accepting the limits of their missions and their friendship.

If you think back to the ‘80s, you’ll remember that 1989 was the beginning of the end for the Soviet Union. In November, the Berlin Wall became nothing more than rubble and in December, Romanian dictator Nicolae Ceaușescu and his wife Elena were tried, convicted and executed. The upheaval continued across Europe, as the audience well knows, but the characters cannot see the political turbulence to come.

Moore and Tennis both shine in this production. They become the characters they are portraying. Each jousts for dominance. Botvinnik with an obvious quest initially for friendship and frivolity, and Honeyman obsessed with seriousness. The tension between the two adversaries lessens as the play continues. Honeyman softens, while Botvinnik becomes more strident.

Honeyman reveals a character in internal turmoil. She meticulously brushes fallen autumn leaves from a bench and a stump, wherever she plans to sit. She depicts hope slowly dying in the face of reality. Botvinnik, until the end, seems unaffected by the insurmountable tension between the two countries.

These acting accomplishments also draw in the audience, which may be feeling as if actual history is unfolding before them.

The one difficulty with the production is the use of a theater-in-the round staging, although more appropriately can be called a theater-in-the square. The audience is seated in four separate sections, each facing a different part of the set. Although the actors move around so that each section sees them, people at one of the two short ends can miss many of the facial nuances and body postures. However, the choreographed movements do mimic a film director’s careful use of varying focus.

Two themes are woven throughout the play: friendship and vision. Moore’s insistence and, often demands, for friendship spar with Honeyman’s determination to stay formal and detached from everything except her mission.

While the push by Botvinnik to be Honeyman’ friend is very open and apparent, the theme of vision is a little more opaque. Moore uses eye drops for his dry eyes. Yet, his accurate realization of the futility of the situation remains crystal clear.

Honeyman, on the other hand, sees only one straight and narrow path toward the acceptance of a joint arms reduction proposal. Her determination is credited to her newness in her appointed position. Moore, a seasoned negotiator, has experienced failure and knows he is doomed to repeat this over and over again.

Overall, “A Walk in the Woods” is a well-seasoned play with outstanding performances and direction. The production runs through Saturday, Oct. 12.