A town and its bar 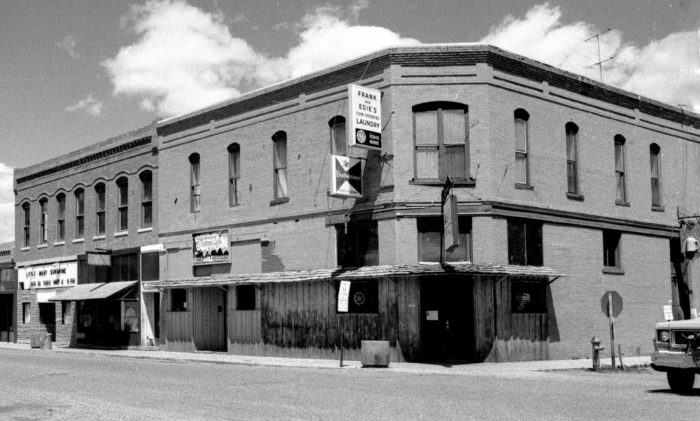 The Black Nugget. The name itself evokes echoes of an earlier time — the grittier Carbondale of coal and miners and unpaved streets.

One who has never been in the dark, slightly mysterious-looking watering hole occupying most of the Fourth Street side of the Dinkel Building might be a little reluctant, but after walking by it numerous times this relative newcomer found it inviting — at least at the early hour I went to watch a friend perform.

The Nugget has been there “for a long, long time in one form or another … the better part of a century,” per its Facebook page. According to Jan (“Hans”) Balas, the current owner, as well as Cassie Cerise, one of the owners between 1999 and 2007, a drinking establishment existed at that location at least since the 1950s. It acquired the name Black Nugget sometime in the 1960s, undoubtedly a nod to the growing number of coal miners working and living in the area. For years it was the miners’ bar, described as “home to the rougher element” of the town in a 2013 article in the Post Independent.

One longtime Carbondale resident, who was a teenager in Aspen in the late 1960s, described how he and his friends would come downvalley to try and sneak into bars for a drink. But they never went to the bar, which was considered “off limits” to “us hippies” (any young person with long hair).

Another local resident lived above the bar for more than 20 years between the mid-1970s and late 1990s. He recalled that the establishment was “pretty rough,” and a place where you might get blind-sided sitting at the bar by a guy who “just wanted to hit someone.” He said that generally he could sleep during the night, even as things got rowdier toward closing time. On at least one occasion, though, he woke up to the sound of someone shouting, “He’s got a gun!” and wondered if a bullet might come through the floor. He never did hear shots while living there but remembered plenty of fights.

As the coal mines began to close and then shut down for good, the town – and the bar – began to change character. Mountain Fair, established in 1972, became the first of a growing number of festivals and other special events. In the mid-1990s, Steve’s Guitars — directly behind the Nugget in the Dinkel Building — began hosting live music. Other venues soon followed suit, and soon bands were playing regularly at the bar, which had become known as the Lone Wolfe Brewing Company.

Still, it wasn’t always smooth sailing. Cerise described how in 2002 the Lone Wolfe fell out of favor with town officials and lost its liquor license. However, the intervention of loyal patrons, including one who in the 2013 PI article described the bar as “something of a legend,” helped convince the town to reinstate the license.

“My parents met there,” noted Cerise, and added that many people “wouldn’t have met their spouse if not for [the Nugget]” (that name reinstated when it reopened in 2003). The bar again made the local news in late 2005 after local residents and members of the Colorado Hell’s Angels got into a fight during a benefit concert there. With a change in ownership in 2007 came yet another name: Carnahan’s Tavern.

In 2012, Dasha Balasova and her husband Vit Blanar took over the venerable establishment and again restored the name Black Nugget.  Before reopening the doors, they completely renovated the space, notably moving the bar from one side of the room to the other and taking down a back wall that had separated the main room from one containing the pool tables. The couple honored the bar’s earlier clientele by decorating the walls with an array of coal-mining paraphernalia and by installing two timber arches commemorating those killed in accidents at nearby mines in 1965 and 1981.

Along with the facelift came a new focus on activities. In addition to live music, the Nugget began devoting nights each week to karaoke, an open mike and pool tournaments.

In 2018 Balas, son of Dasha, took over as owner. He has continued to operate the Nugget as it had been under his mother and Blanar, though he substituted a free pool night for open mike night. He calls his establishment the “melting pot of the valley,” and on a recent Saturday night that was evident. The bar filled with a mixed and mellow crowd as the evening wore on, the “legend” — having shed its rough-and-tumble past — now reflecting today’s diverse Carbondale.