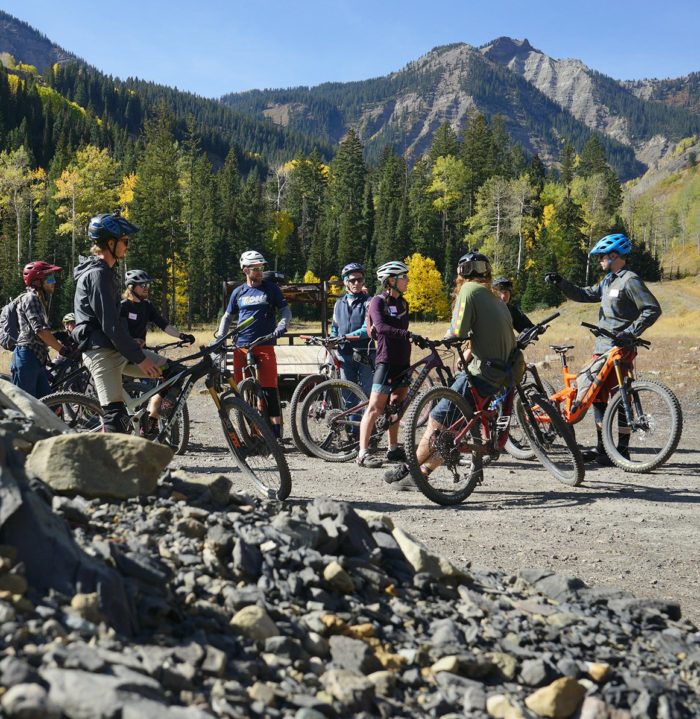 Volunteers who showed up on Oct. 5 to re-seed the hillsides below the old Mid-Continent Mine in Coal Basin were helping fulfill the mission of the new Coal Basin Mountain Bike Preserve west of Redstone. The owners of the private property, Walmart heirs Sam and Tom Walton, aim to show how planning for recreational use on impacted landscapes can benefit restoration of those lands.

The preserve comprises 221 acres surrounded by national forest near the end of Coal Creek Road. The trail system totals about five miles and will be open to the public at no cost for mountain biking, hiking and running. An easement was granted to Pitkin County Open Space and Trails to allow public access. The preserve trails offer another way to access the area’s existing trails, such as the Coal Basin Trail (a reclaimed mining road), Lake Ridge Lakes and Dexter Park area.

Although the preserve does not open until summer 2020, volunteers got a sneak peek of the new trails on Oct. 5 before participating in an afternoon work project co-sponsored by Roaring Fork Mountain Bike Association (RFMBA) to help reestablish native grasses alongside the trails. Other restoration efforts have included collecting and clearing out trash, improving the soil health, erosion control and tree plantings by students from the Marble Charter School.

“The idea is to demonstrate how access for education and recreation can really drive restoration in a heavily impacted landscape,” according to the preserve’s property manager and project manager, Lee Bowers.

Mid-Continent conducted its mining operations at the site from 1956 to 1991, extracting from mountainsides via portals and tunnels and preparing the coal at the base, then hauling via truck to the transfer station located off of Catherine Store Road in Carbondale before loading the coal onto trains.

One longer trail (not officially named yet) climbs through aspen and evergreen in the Dutch Creek drainage to the old mine entrance before topping out with views of the peaks in the Maroon Bells-Snowmass Wilderness to the east. As the trail makes the final descent back to the starting point, it cuts across a steep hillside, soft with coal-dust-laden soils.

“When you previously looked at it, it was like, ‘Oh, I don’t even want to touch that because it’s so steep and eroded.’” Bowers said. “If you didn’t have the desire to put a trail in there, then you wouldn’t take the restoration any further.”

Environmental Excavation has been contracted to aid in the soils’ restoration and pond-design/construction, and re-seeding and planting efforts will continue into the future. But Bowers said building trails also helps minimize erosion.

“The trail itself — the bench cutting — is what slows water down, and you can direct the water where you want it to go, instead of water running and creating an erosion rill right down the hillside,” he said.

The trails on the preserve are designed for mountain bike skills “progression,” meaning that beginners can tackle sections to learn and practice skills and then continue to advance on different lines and trail sections. These looping “gateway” trails are at the base of the preserve and circumnavigate a natural pond and man-made pond (that also will be used for irrigation to help establish the new plantings). Picnic tables and shade structures will further make the preserve family friendly.

Bowers said the preserve will partner with the nonprofit Roaring Fork Cycling, which offers mountain bike clubs, camps and clinics for students in grades 1-12 from Glenwood Springs to Aspen.

“We hope to have them running programming out of here next summer. I think it’ll really open things up for them because most of their programming is occurring in Snowmass [Village] right now. That’s because they cannot guide legally on the national forest without a recreational outfitter’s permit,” Bowers said. “This will be a great place for more mid-valley and down-valley kids to come up and ride without having to go up to Snowmass.”

RFMBA Executive Director Mike Pritchard said the partnership with the preserve “makes a lot of sense,” particularly because of the nearby existing routes.

“I think it’s going to be the kind of thing where people will arrive, they’ll ride some of the new trails, but they’ll continue up on the Coal Basin Trail much further, at a higher elevation, then finish on this fun experience down here,” Pritchard said. “Then they can finish the day in Redstone, have some pizza at Propaganda Pie, make an adventure of it.”