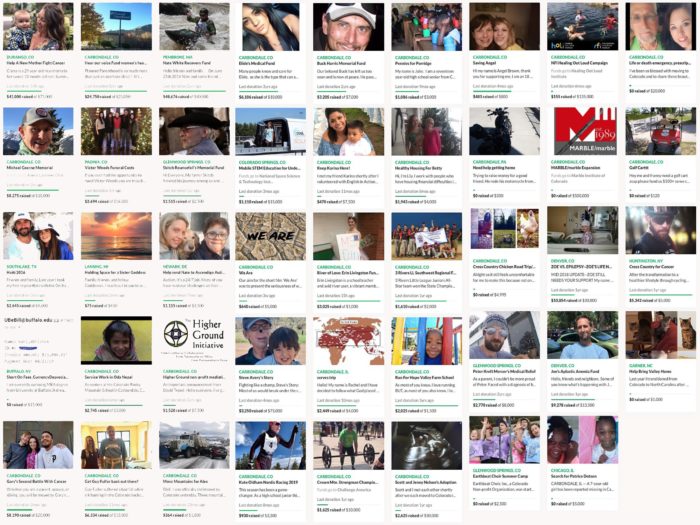 Steve Avery had his nose, three teeth, upper lip and part of his palate removed in addition to a lymph node dissection, chemotherapy and radiation as part of a cancer treatment that turned out to be only the beginning. After complication after complication and in advance of a heart valve repair, his insurance company notified him that he would be responsible for $75,000 worth of “alternative” treatments. Carbondalian Todd Fugate arranged a GoFundMe fundraiser which netted $3,250 of that goal.

Gary Livingston was diagnosed with germ cell cancer last year and underwent surgery and  four rounds of chemotherapy, only to be re-diagnosed this spring. His own GoFundMe page, organized by Juan Magaña, doesn’t specify whether he has any health insurance, but sets a $20,000 goal of which $8,190 had been raised at press time.

Ciarra Bristol Boyer was diagnosed with acute myeloid leukemia on Sept. 19 and began chemotherapy less than a week later. The Carbondale native was separated from her 10-month-old son, Summit, and she and her husband, Marlin, put their Durango-based blind business on hold for the foreseeable future. The fight for her life is expected to take up to a year, complete with a bone marrow transplant. Her own GoFundMe, organized by childhood friends Rebecca Roeber and Celeste Scoville, has reached $41,000 of its $75,000 goal — but the true cost will likely be much higher.

“From everything I’ve heard who’s going through cancer treatments, she’s going to need closer to $200,000 out of pocket,” Roeber noted. “They worked for the American dream and they kind of achieved it, but in a sense it sort of backfired. Now nothing’s for sure.”

“I think it’s just sort of an unspoken that, although insurance will cover some, we all just kind of know that it’s not going to cover nearly enough, so you have to take other actions to meet those needs,” she added. “It takes one day for a diagnosis to flip your life upside down. I just wish there was an easier answer. Something’s not right, right?”

Still, being between jobs and far away in Kansas City, organizing a campaign seemed like the best way for Roeber to help.

“You feel helpless when someone you love gets that diagnosis,” she said. “When you have a lifelong friend in need, you’re just willing to put anything you can forward.”

With multiple communities connected to the cause, it seemed worth a shot.

“If I was her I’d be so angry at the situation, and she just has the best attitude. I think it’s who she is as a person and her story that’s raised the money,” Roeber said. “There are a lot of negatives to social media you hear about, but this is one of the positives. It’s pretty easy to set up, compared to like a dinner or a silent auction, and it gets out the story you want to tell to the audience you want to ask for help.”

Still, Roeber sees something strange in the process of crafting a narrative, setting a goal and appealing to friends, family and strangers to help.

“You don’t think you’re going to have to pull on people’s heartstrings just so your friend can pay for treatment without being forever indebted,” she said.

But that’s precisely what folks locally and around the country are doing, time and time again. A survey of open GoFundMe campaigns in the area showed that about a quarter had to do with medical costs — not counting those for memorial or funeral costs.

And that’s just the people willing to ask for help on one platform at one moment in time. The Sun received frequent requests to cover campaigns to help people with similar stories — children with cancer, youngsters in car accidents, and retirees who expected medicare to cover more than it does. As a general policy, we always offer at least a scuttlebutt mention, but it’s impossible to cover them all in depth. And even when we do a story, there’s often very little appreciable difference in the success of the campaign.

So what can be done? Organizations like Tom’s Door and 100 Women Who Care can help out on a case by case basis. Short of a European-style public healthcare system, regulations on healthcare and insurance could ease the burden. Meanwhile, it appears we’ll have to square with pitching in to help our own when such situations arise. After all, tomorrow it could be us.