Our Latino and Anglo communities don’t interact much, but they could 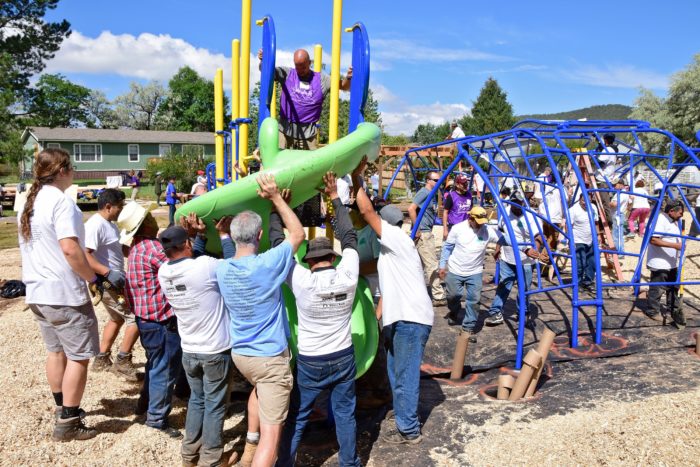 In school students learn that what makes America unique is that it is a melting pot of many cultures. This sentiment can be compromised in the “real” world, and when it comes to the Latino and Anglo populations in the Roaring Fork Valley the notion is put to the test.

According to the most recent census, 47.5 percent of Carbondale’s population is Latino. It would reason that Latinos and Anglos cross paths regularly, but the community as a whole can fall short of integrating the two ethnic populations.

Merriam-Webster defines integration as the “incorporation as equals into society…” While institutions in the Valley are taking steps to create equal access and representation within our blended Latino and Anglo community there is still much work to be done. There is often a disconnect between Latino and Anglo persons in the Valley. Fortunately, there are several entities and individuals who intend to change this stasis.

English In Action (EIA) is one such program that has made strides to bridge the gap. The organization’s mantra is, “discovering community, two people at a time.” EIA provides tutoring to Spanish speakers learning English. A tutor and a student will meet regularly one on one and get to know each other. They will invite each other into their homes and introduce one another to their families. While a basic goal is for the student to develop their English language skills, the relationship builds and connections are made between their two worlds.
Samuel Bernal, a board member for EIA, wholeheartedly believes in EIA’s method stating “it’s a way to build community and integrate the Anglo and Latino communities.” Bernal points out that much integration is done through commerce. He explains that “commerce is the human activity that gets people together — it doesn’t matter what your religion or political affiliation is.” For instance, when an Anglo person has dinner at El Pollo Rico they get to experience the food, music and language of a different culture. Valley Settlement is another organization that assists with the integration process. Valley Settlement has six programs which according to Sally Boughton, Assistant Director of Development,  “are co-created with the Latino immigrant population here in the Roaring Fork Valley.” Valley Settlement’s Parent Mentor program trains volunteers to work one on one with students in classrooms within the Roaring Fork School District.

The Parent Mentor Program is at a standstill due to an update in the District’s background check process for volunteers. A prospective volunteer is expected to complete a digital questionnaire. One of the questions inquires what the applicant’s citizenship status is. The prompt discourages some to participate in the Parent Mentor program. The school board is expected to revisit this issue at the next meeting on Oct. 23.

Neither Valley Settlement nor EIA refuse people based on immigration status. EIA Executive Director Lara Beaulieu explains, “ we have a policy that we do not ask for documentation from our participants and we don’t accept any funding from sources that would require us to ask for documentation.”

Bernal also serves on the board of Ross Montessori Elementary School, where he is the only Latino representative. Bernal is grateful for the efforts Ross Montessori makes to accommodate Latino students and parents, including his own children. Bernal says, “I want to recognize that they do a great job with integrating kids.”

To Roaring Fork School District’s Superintendent, Rob Stein’s knowledge there has never been a Latino person that has served on the District’s school board. Stein recalls an editorial piece he wrote to the Post Independent this past summer, “expressing my hope that the school board look more like the community.”

It just so happens that Jasmin Ramirez, a Latina community member and graduate of Glenwood Springs High School, is running for a seat on the school board. While Ramirez aims to increase Latino representation within the District, she is running with the entire community in mind. Ramirez elaborates,“as an elected representative I would have the duty to represent all of the students, teachers and parents in this district but I have the advantage of being bilingual and being Latina to serve a larger demographic within our District and I intend to do that.”

With the current political climate, it is no secret that immigration is a contentious topic. It can be difficult to reach a middle ground between two persons (or entities) which disagree on the issue. One unfortunate result is that members of the Latino community are burdened by fear. A Latino person may fear being discriminated against and/or deportation.

Even if someone is a citizen they may have relatives that are not and are potentially at risk of deportation. Often Latino children are US born citizens but their parents immigrated. Families fear being separated.

Bernal is the station manager for La Tricolor Aspen radio station.  A portion of the news broadcasts relate to Immigration Custom Enforcement (ICE) raids. This worry often debilitates immigrant participation within the larger community.  He is very grateful to live in this valley. He was born in Mexico City and his wife and children immigrated to the US as well. Bernal thinks it is important for Latino persons to feel welcomed in the community. Ramirez echoes this stating, “we need the support of all communities, specifically the Anglo community, to help open the doors for us.”

Latinos and Anglos working together to reach a common goal is an effective way to integrate. For example last year Valley Settlement along with Crawford Properties, The Colorado Health Foundation, KaBoom!, and Eagle County organized a group of 170 multicultural volunteers who built a playground in El Jebel. This brewed camaraderie between members of both cultures.

Anglos attending Latino events and vice versa is another way to bond the community. One such opportunity is coming up. EIA will be celebrating their 25 year anniversary by hosting a “Fiesta de Tamales” from 5 to 9 p.m. Oct. 19 at Basalt High School. All are welcomed to attend.

While many are working toward creating a blended community, or comunidad mezclada in Spanish, they implore everyone to contribute by reaching across the table.