The Contemporary to become a permanent fixture 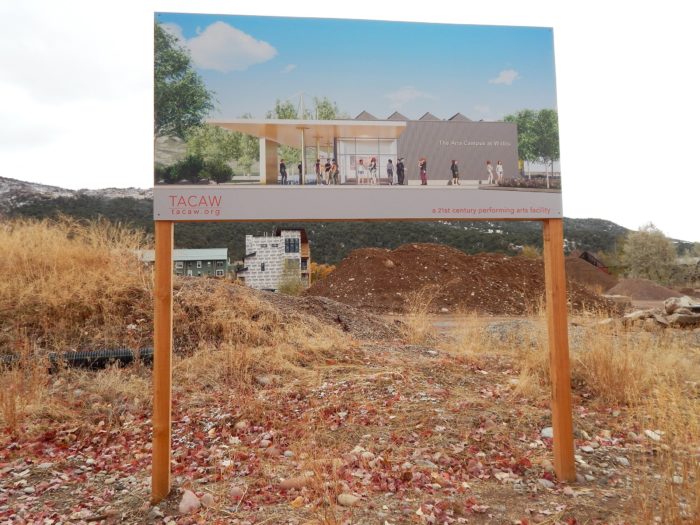 After the experimental performing arts space, The Temporary, was closed abruptly last spring, plans were accelerated to build a larger venue as a stand-alone structure.

The Arts Campus at Willits (TACAW), the nonprofit that operated The Temporary and will operate the new venue, moved forward with ambitious fundraising goals and now plans to break ground on The Contemporary, a 10,000-square-foot arts and culture hub, this winter or in the spring of 2020.

TACAW has received the go-ahead from the Basalt Town Council to begin construction on a parcel leased to the organization for 99 years. Building permits will be secured shortly, according to TACAW’s executive director, Ryan Honey. The Contemporary will occupy the southwest corner of the Willits development. It will boast a theater, community room, “activated” lobby, kitchen, covered outdoor terrace, and offices and other support spaces.

“The community is ready for an arts and culture center,” said Honey. “I get excited about the building because of what else it will do [that the Temporary could not]. The stage and theater are optimized for a performance space. That’s going to allow us to have a better artist and patron experience, and bring in even higher caliber artists than we were able to bring in at The Temporary. Then we have a dedicated education and community room right in the front of the building, which is a huge asset,” he said.

Honey also pointed to after school arts programs, weekend workshops, and rehearsal space as benefits of the planned venue. The active lobby space will be perfect for community gatherings, as well. “There’s all these metrics with what happens to a community when people are exposed to the arts… It’s just good for a community,” he said.

Funding for the $5.2 million Contemporary will be sourced in several ways. A Willits real estate assessment earmarked for the arts, a half of one percent tax on real estate transactions, is currently accumulating an average of $136,000 per year. The fund has over $942,000 that could be used toward construction costs. TACAW will finance up to $2.5 million. The rest will hopefully be sourced through donations, grants, and other fundraising techniques.

“We’re moving ahead with construction because we have the 2.7 million that we need to move ahead. By no stretch are we done fundraising— we’ll be actively fundraising throughout construction,” said Honey. “Our goal would be to open the building without any debt. We want to rally the community behind that vision because that’s going to allow us to have more vibrant programming… We want to enroll everybody in the midvalley in that effort because it’s their home, too,” he said.

According to Honey, construction on the facility will begin soon. “Without question you will see people moving dirt around some time in the winter or spring because we’re going to get this thing built.”

TACAW passionately believes the midvalley area is ripe for an arts and culture center. The organization cited the significant achievements of The Temporary as the best evidence for that assertion. “The Temporary demonstrated significant support for world-class arts, culture, and entertainment and a profound demand for creative expression and collaboration within our community,” said a digital deck produced by TACAW. According to the document, The Temporary enjoyed more than 25,000 patrons, collaborated with 38 regional and national nonprofit programming partners, and spurred $1.3 million of spillover spending in the local economy. Artistic Director Marc Breslin, who sourced acts for the Temporary, will continue in the same capacity at The Contemporary.

In the meantime, TACAW has been busy bringing live music and other artistic experiences to the midvalley. Since The Temporary’s closing, the organization has hosted over a dozen free concerts in varied locations, such as the Basalt Chamber, Crown Mountain Park, the Basalt library, and restaurants.

The series, Random Acts of Culture, is meant to demonstrate to midvalley residents and visitors how arts can enrich life. “While we’re homeless, essentially, we’re committed to continuing to bring arts and culture to the community,” said Honey. “We’ve been able to stay active. But not having The Temporary and not yet being in The Contemporary has really highlighted the need for a performing arts space in the midvalley. People love what we do, we just need a home for it.”