Thrills and chills for a good cause 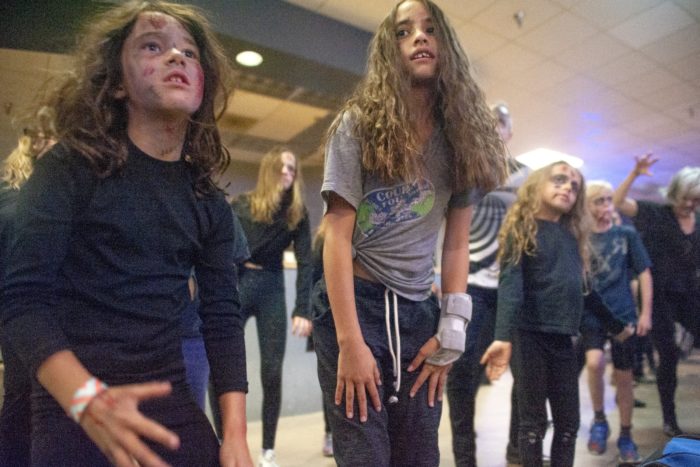 Look out! The “Thriller” Flash Mob is coming this week to any place at any time. So if you see a group of zombie-attired kid and adults performing to well-known music, don’t be scared.

It’s just that wild and wacky dance group from Coredination, Bonedale Ballet and Bonedale Flash Mob, run by Anthony and Alexandra Jerkunica. Carbondale’s fifth such free event is set for 4 p.m., Saturday, Oct 26, at the Fourth Street Plaza. Donations will be accepted for the Family Resource Center (FRC), this is the first time a designated charity has been attached to the event.

Local event co-coordinator and zombie dancer Heather Pratt, explained, “I’ve always loved this song and wanted to dance to it, but I never had any formal dance training.”

When she found out about the flash mob classes at Coredination, she jumped on the chance to learn the dance.

Pratt added, “This is the first year we’re adding fundraising. I think we will select a charity each year from now on.”

In the week before the dance and up until Halloween, Bonedale thriller flash mobs will surprise locals at various sites including schools, shops, public buildings, open spaces and businesses.

Thrill the World is a global celebration of dance and community and also an annual attempt to break the record for the largest simultaneous dance with Michael Jackson’s Thriller. Thousands of people around the world will learn the “Thriller” dance and perform it together all around the same time on the day Thrill The World takes place.

2019 marks the 37th anniversary of the releases of the “Thriller” album. It is still a popular and well-known video that crosses boundaries of language, culture, and geography. Many believe that this is largely due to the amazing choreography.

FRC provides students with services such as basic needs, medical, dental and mental health support to remove non-academic barriers to success. Pratt said, “They really help students in the Valley.”

During the 2016/2017 school year, family liaisons worked directly with the parents of more than 627 students. For some families multifaceted challenges bring them back to FRC repeatedly.  Last year the parents of 104 students received case management services. Teachers, school counselors and parents report that those students showed marked improvement in each particularly  difficult  situation and also in their general behavior, attendance and academic progress.

According to FRC, “Once the students were connected with needed resources, they could focus on school and were ready to learn.”

Being selected to be the 2019 designated charity, according to Director of Family Services Sarah Fedishen, “is an honor we really appreciate.”

She explained the donated funds will go directly to student services such as medical, dental and mental health needs.

“This time of year,” Fedishen said, “We focus on homelessness as it’s getting quite cold.”

Recently she helped a family with two children that had been camping near the Crystal River find long term, safe stable housing, “That was so rewarding for me and everyone here.”

Coredination also performs flash mobs through the year. For information, contact the studio at movefromyourcenter@gmail.com or 379-2187 and 379-8108.