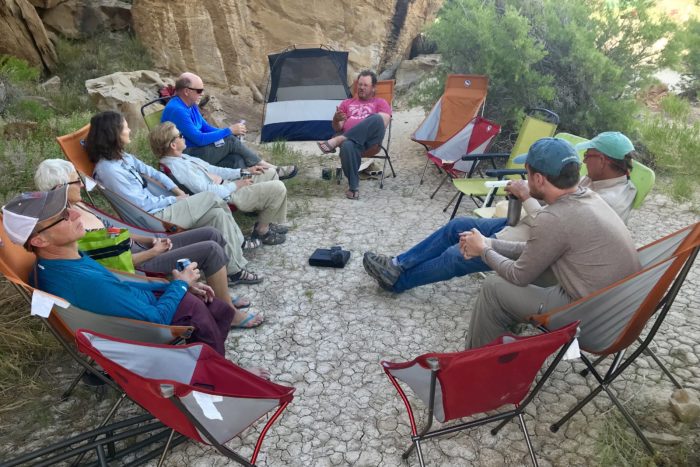 On Wednesday, Oct. 16, the Roaring Fork Conservancy hosted its first presentation of The Brooksher Watershed Institute 2019 Fall and 2020 Winter Speaker Series. The event, featuring Dr. Tom Minckley, Professor of Geology at the University of Wyoming, drew nearly 100 participants and captivated the audience with riveting stories of adventure and information surrounding water conservation efforts in the Colorado River Basin.

“Water in the west has always been a concern of mine,” Dr. Minckley noted. “[SCREE] was an opportunity to put myself into the experience […] to readdress the concerns of resources, social justice, and land use.”

Since Powell’s expedition into “The Great Unknown” the riparian ecosystem has changed dramatically. What was once a pristine, continuous journey through the wetlands of the West, is now a system “separated into two basins, with three major dams, 15 management areas, and over 20 signficant laws governing the allocation of Colorado River water” according to SCREE.

As a result, the members of SCREE could not retrace Powell’s journey exactly. Instead they focused on re-envisioning the future of the Colorado River Basin, specifically by researching what the basin represents for current day society and how to promote dynamic management strategies.

“One of the biggest differences between now and Powell is sense of place” Dr. Minckley emphasizes. “Powell was focused on utilitarian uses such as agriculture and growing food… [In today’s society] we are concerned with recreation economies, and there is significant conveyanced water for recreational use.”

The Roaring Fork Conservancy (RFC), one of the largest watershed organizations in Colorado, is  promoting an initiative that is propelling the conversations and measures necessary for effective and sustainable management procedures that Dr. Minckley stresses.

“The Roaring Fork Watershed is nearly 1,400 square miles, which is about the size of Rhode Island,” she said. “It is healthy and flowing, and nearly 40 million people depend on it. With our [speaker series] we are bringing in more water leaders beyond the local area to discuss the importance of water conservation efforts specifically in the Roaring Fork Valley.”

Since the Roaring Fork, Crystal, and Fryingpan rivers are three of the major drainages for the Roaring Fork Watershed, there is a remarkable amount of attention being directed toward the valley, Medved observed.

“Everyone is paying attention to our water situation and snowpack,” she said. “We’ve had professionals around the world tell us that not a lot of people are doing what [we] are doing.”

Specifically, the Roaring Fork Valley has witnessed numerous occurrences of the “anchored ice” phenomenon, in which submerged ice attaches to the bottom of riverbeds during extreme cold. Local occurrences have attracted the attention of world-renowned scientist, Dr. Edward Kempema, Senior Research Scientist at the University of Wyoming. Dr. Kempema has over 40 years of ice research experience, and will be presenting at the Roaring Fork Conservancy in February.

[The series] is a good opportunity for the public to meet other people and learn directly from the professionals.” Medved asserted. “Since there is an increase in [valley population], we want to help create an informed citizenry.”

With the establishment of more education and outreach programs such as the speaker series, Medved intends to inspire future stewards of the river to be more vigilant when recreating or using water.

Looking toward the future, Dr. Minckley emphasized the importance of acknowledging that our society is in a transitory time.

“If you’re not a part of the discussion someone will make decisions for you,” he said.

The next installment of The Brooksher Watershed Institute speaker series will take place on Nov. 12 featuring Eric Kuhn’s presentation on how ignoring inconvenient science drained the Colorado.

Visit roaringfork.org/events for more information, to watch past presentations or to RSVP for future ones. Also, check out powel150.org for more on Minckley’s expedition.