Talking trees with the Town Arborist 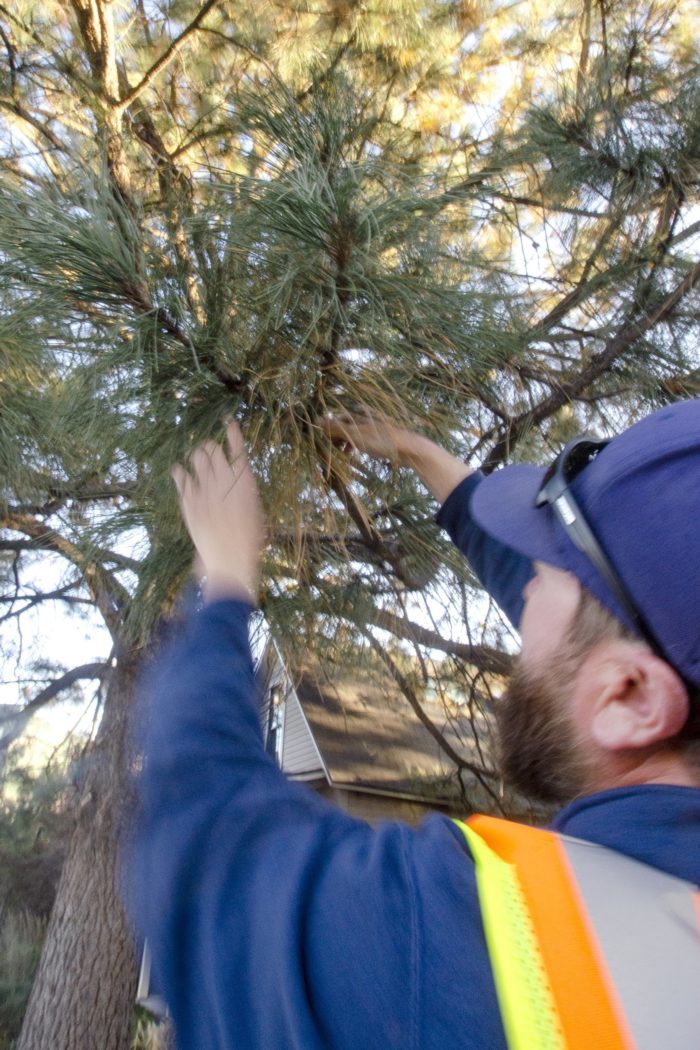 Ask Mike Callas about his favorite trees in town, and he won’t show you the biggest or most beautiful specimens. Instead, the Town Arborist has a special affection for those with deep historical roots or new varieties he’s gone out on a limb to bring to Carbondale.

Take, for instance, the ponderosa in front of the old post office building where Colorado Avenue turns into Third Street.

“A tree like this conceivably has probably been here since the early 1900s, and same with the spruces,” he said, standing in front of the specimen on a chilly October morning. “They’re probably our oldest planted landscape elements in town.”

There certainly weren’t many trees here before. Callas’s favorite wild trees are the ancient bristlecones that thrive just under treeline.

“That’s where I’m out hugging trees,” he said.

But the shallow fast-draining or clay soils along the river bottoms don’t support the kind of trees you see back East, even if the climate did.

“When this Valley was settled, Carbondale was wide-open sagebrush, rabbitbrush, a little bit of piñon-juniper,” Callas explained.

Even though some consider them a nuisance, he has to give credit to the Siberian elms which were “the trees that grew” — and have continued to self propogate. He has similar feelings about the silver poplar in front of the Smithy which, while beautiful, has a propensity to drop big branches. It’s a holdover from a time when such trees lined Third Street, and its heir is already being groomed to hold down the corner.

In general, Callas has learned not to get too attached to the trees on Main Street. With the exception of a few with extra room — the spruce in front of the Forest Service Building; the linden at the start of the Promenade — it’s an environment too fraught with conflicts and confinement for them to flourish.

“If you walk down the street, you can see where a substantial limb has been ripped off every one of these trees,” he observed. “Unfortunately, the life of a street tree is about eight to 14 years in an urban environment.”

Those in front of the Crystal Theatre and in front of Friendship Park have defied those odds only to meet the limits of their vaults which, even with new techniques to encourage downward growth, are a limiting factor.

“Main Street’s so narrow that we don’t have that opportunity for that big classic allée of trees where branches meet in the middle,” Callas said.

Then there’s the matter of pests like the emerald ash borer, which has prompted the Town to diversify rather than risk a mass wipe out — note the lone oak in the Fourth Street Plaza.

The purple robe locust, by contrast, is susceptible to beetles when young but gains resilience with age, making it one of the top tools in his arsenal. He has also been pleasantly surprised by success with the Kentucky Coffeetree, and is even eyeing the possibility of testing out sterile Ginkgo biloba in town.

It’s a bit of trial and error. The London planetree seemed promising, but didn’t take. A spring snow crabapple which was supposed to stay short enough to plant under a powerline has grown out of control in front of the old Dinkel house on Third Street.

“Especially as it’s been a bit warmer and dryer it’s been more difficult to establish new trees,” Callas explained. “As we’re choosing these more drought tolerant species, it sets us up to survive in the tough times and then allows them to catch up in the wet seasons.”

He’s also doing his best to keep large old trees healthy until a new generation can take over.

“It’s almost like there was a gap in planting,” Callas observed. “For the last 60 years, there hasn’t been a need to think about those tall trees.”

The Town’s investment in a dedicated arborist — far from a given for a municipality this size — and a volunteer board is slowly making up for that. For each tree lost to “the construction death spiral,” there’s a “right tree in the right place” that should last to be just as big.

It’s a year-round effort. When it’s too cold to prune but not snowy enough to bring branches down all over town, it’s time to begin putting up holiday lighting.

In fact, he’s happy to help out with issues on private property, as well.

“Anybody can feel free to call me and chat about trees. Myself and the Tree Board like to see trees be successful,” he said. “You love ‘em all, but you recognize you can’t save ‘em all. I guess that’s where the tough part of the job comes in.”

The upside is leaving a lasting legacy, he said.

“I’ll never sit in the shade of this burr oak I planted last year, but at least somebody will.”