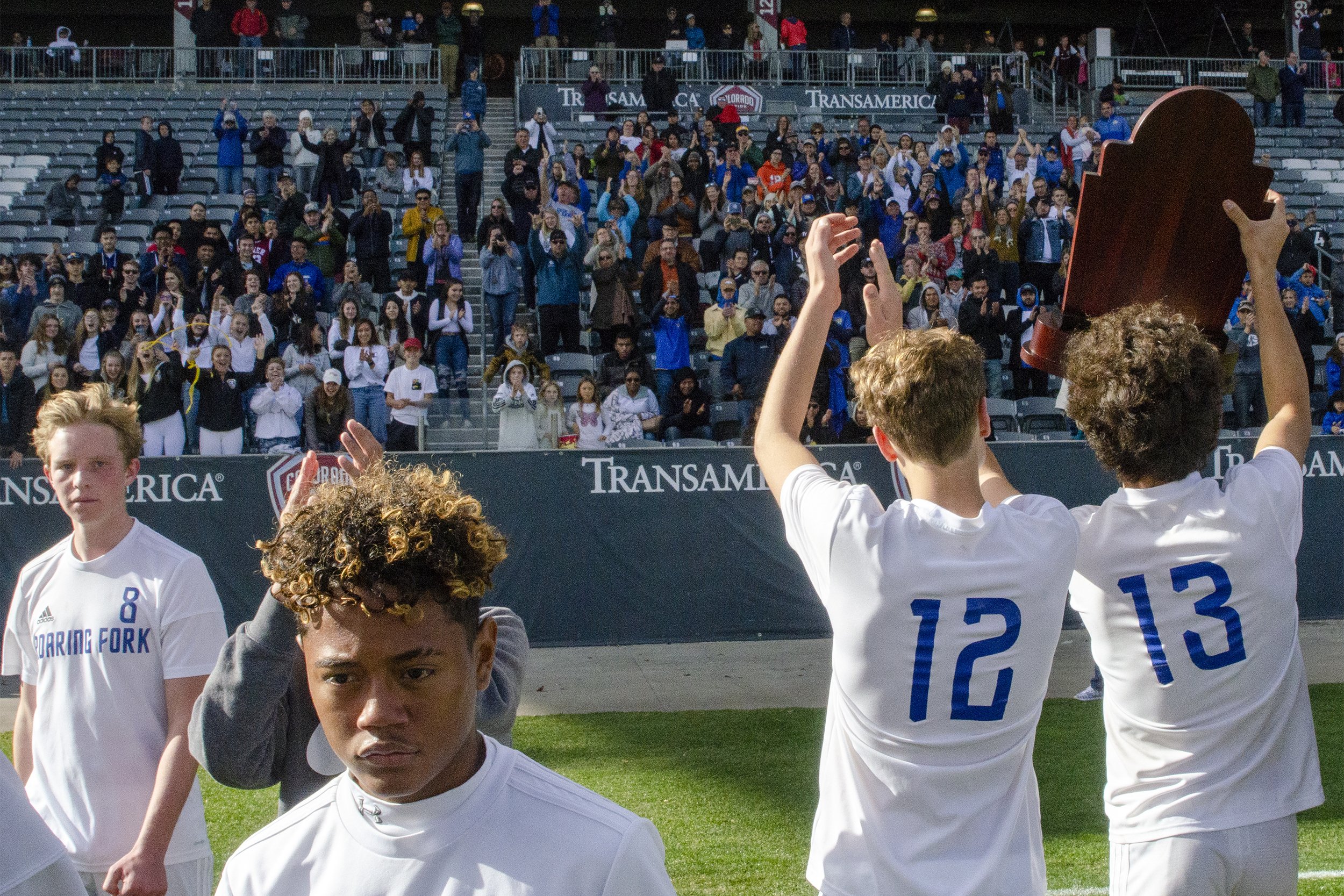 It wasn’t the victory they had hoped for, but it was a far cry from failure.

Roaring Fork had never played in a state soccer final, and were the first public school to make it that far in a decade — although Salida would have held the same distinction had the Rams not eked out a narrow victory in the semifinals.

Kent Denver, by contrast, had won four out of the last five championships.

Coach Nick Forbes knew the deck was stacked against his team when he spoke with The Sun on KDNK after Roaring Fork defeated Salida in the semifinals and before the big game.

“Kent Denver is a very high powered soccer force,” he said. “They have a lot of resources and their coaching staff is probably as big as our team.”

The discrepancy wasn’t immediately apparent as both teams took to the turf at Dick’s Sport Goods Park — home of the Colorado Rapids — on Nov. 16.

Both schools sported strong contingents of fans. The Rams’ might even have been a bit bigger and included not only parents but business owners, public officials and just supportive community members. Some of the same faces had come out the previous day to cheer as the boys’ bus — escorted by police and driven by Chief Gene Schilling — did a lap down Main Street on its way out of town.

“We live in a pretty special place,” Forbes said later. “It’s so great to make it there and see the support from the fans and the community. It shows you how much people care.”

That positive energy seemed to sustain the Roaring Fork through the first half as they played defensively and managed to keep the score to 0-0 even with Kent keeping the pressure on goalie Noah Wheeless — a junior — would later be named the team’s player of the game for his performance.

“A lot of the saves he made to keep us in that game were as good as I’ve seen at the high school level,” Forbes noted.

The sun came out in the second half, but it didn’t seem to shine on the Rams.

“I think when that first goal went in the task became so much greater. We had to start pushing for our own goal to tie it up, which leaves chinks in the armor,” Forbes explained. “The game is so much about confidence, as soon as you lose that it all kind of goes south.”

Amid five unanswered points, the Carbondale crowd grew almost silent, save for one small voice from the very back still chanting “let’s go Rams!” But when the final buzzer sounded and they gathered to collect their second place trophy, the boys got their fair share of cheers.

“We just came up against the best team in the state. It’s really hard to digest the final result, but just getting there is an achievement in itself,” Forbes said. “As a coach, I couldn’t be more proud.”

He particularly praised seniors Dylan Webster as “one of the best players on the field in any game,” Lucas Schramer and Aidan Foote as “just the embodiment of grit” and Frankie Harrington as “a rock at the back” despite a hip injury for half the season. Webster, Shramer and Harrington were chosen for the 3A Western Slope all-conference team, with Forbes as coach of the year.

He also gave plenty of credit to the All-Valley Select Club, which “make kids that are both great human beings and great players.” His own eight-year effort to build the program hasn’t hurt, either. The girls’ team, which plays in the spring, is also a powerhouse.

And while many of Kent’s top players will graduate this year, Roaring Fork’s roster is stocked with talented underclassmen like Daniel Vega, Kevin Duarte and Junior Mercado and even stands to regain some kids who were ineligible this year.

“Now that they’ve faced the final they’re going to be extra motivated to get back there and give it another go,” Forbes said. “Each year in the last three we’ve won one more game.