On patrol with Carbondale’s finest 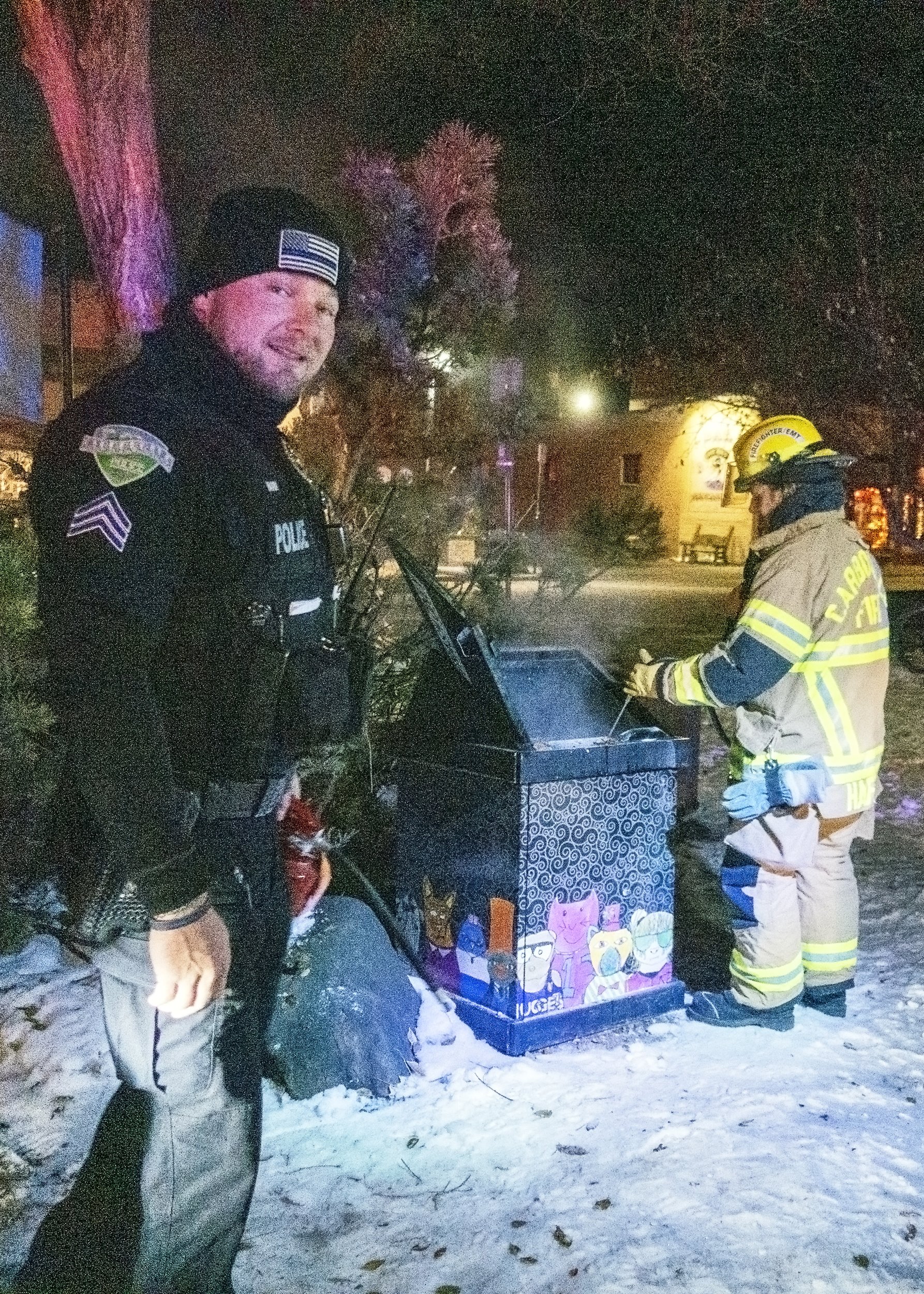 It’s 8 p.m. on a recent First Friday — a dark and chilly evening on Main Street.

Since the town is celebrating Dia de los Muertos, the Fourth Street Plaza is hopping. Artists from Dance of the Sacred Fire mesmerize the audience as they arc and weave during their fire and aerial silk performance using long scarves that whirl and twirl.

Fire dancers are like gymnasts but with flames shooting out around them. The crowd “oohs and ahhs” at every twist and turn. Others mill around, enjoying the festivities at this and other spots downtown including the Thunder River Theatre and the Third Street Center.

Whether you are here or at home watching your favorite TV show or streaming ESPN, you most probably feel quite safe. And you are.

Much of the credit for this atmosphere of security goes to the hard-working officers of the Carbondale Police Department. Chief of Police Gene Schilling encourages the community to take advantage of the department’s open-car-door policy. Going on patrol can take one, two, three or 12 hours or anytime in between. Your choice.

Just note that going on patrol is serious business. Danger is unlikely, but still does exist.

So let’s spend a few hours together on a ride-along starting with Sgt. Randy Rodgers and later with Sgt. Robb Windham. First stop with Rodgers is at the plaza as the fire dancers begin flying with the flames.

Rodgers is watching that the fire element stays under control. He never stops looking around for other dangers that might be creeping into the scene or anything else considered out of place or worrisome.

Well prepared for whatever may come, Rodgers wears standard police gear including his department-issued firearm, bullet proof vest, handcuffs, body camera and a communications device. He brings other equipment if the situation warrants it.

The ride-along continues with Windham, who works the 6:30 p.m. to 6:30 a.m. shift. He says the hours are a terrific match for him and his family. Living downvalley, he notes, “Traffic is light for my Interstate 70 commute.”

Windham drives slowly around town, but never the same route so no one can anticipate his movements. Better to be safe, he explains.

A call comes in about a man, well-known to police, who may be driving while intoxicated — a possible DUI right now. Windham drives to where he thinks the man might be. But, no sign of him. Next, Windham meets up with another officer to check out a report of the same guy threatening to use a gun on a neighbor he’s been arguing with.

After the two officers knock on the door of that neighbor and chat with him, they head over to the suspect’s home. A relative there says the person in question isn’t home and doesn’t have a gun. But, in an exercise in caution, the officers search meticulously through the suspect’s vehicle. Fortunately, nothing deadly is found.

The dispatcher now checks in with a report of nasty smoke at a downtown large trash container. Windham drives over and meets up with another officer. They start managing the source of the smoke and then call in the Carbondale Fire Department to finish the job.

It’s interesting to sit next to the patrol officer as the area between the two front seats, an elaborate communications console, glows reddish orange. Winham explains the different audio options. There’s a Carbondale police channel and also one for the Garfield County (Garco) Sheriff’s Department.

“We don’t usually respond to Garco calls but will react quickly to any requests for assistance,” he notes.

Windham has a special designation — drug recognition expert (DRE) — after his title. He completed a three-phase intensive training program and is well-equipped to figure out if an individual is under the influence of alcohol and other drugs or suffering from an injury or illness that produces similar signs to substance impairment.

He carries a naloxone hydrochloride injection (NARCAN), an opioid antagonist used for the complete or partial reversal of opioid overdose, including respiratory depression.

“I’ve used this to save lives, but sometimes it’s just too late,” Windham confirmed.

Up pops the question about his patrolling boundaries.

Windham explains,“We go from where Catherine’s Store Road starts at the old railroad tracks, then to the bridge just before the intersection between Highway 133 and Highway 82 and then back south on 133 to the Roaring Fork High School.”

Windham describes how the department sees its role. “We are a community-based operation and work hand in hand with the Carbondale Fire Department, as well as local officials, residents, visitors and business owners.That’s our job, our focus and our commitment. We’re here to help wherever and whenever we’re needed.”