Review: Musical satire that will knock your socks off 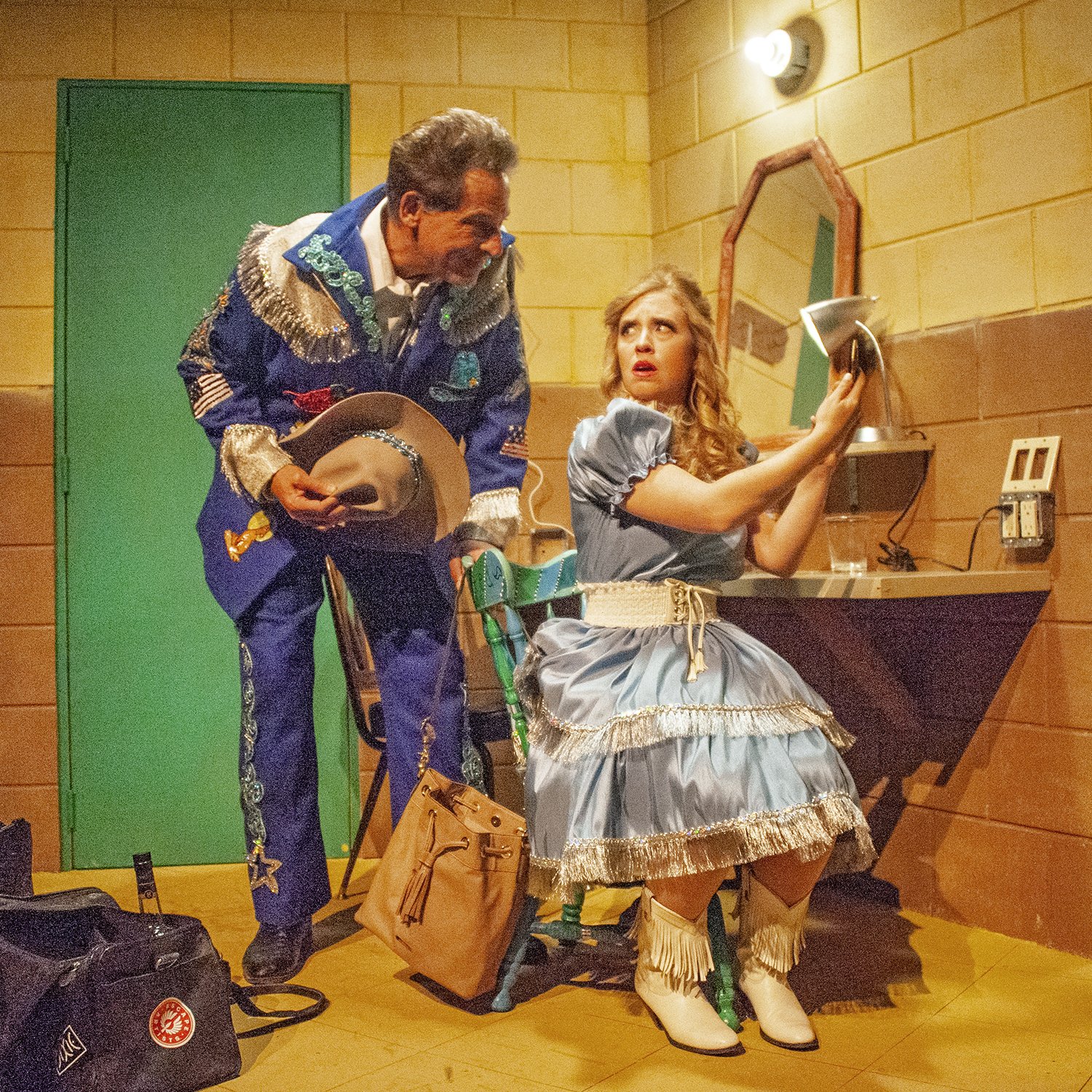 “The Doyle and Debbie Show’’ performance at Thunder River Theatre Company(TRTC) is a hysterical romp through the raucous, honky tonk world of the Nashville country music scene.

From the play’s opening scene with a background recording of “Whiskey for my men and beer for my horses” by recording stars Willie Nelson and Toby Keith, the stage is ready for the outlandish and racy story to follow.

The singing and acting are superb. As many actors say, comedy is more difficult to put on than drama, as it must have razor sharp humor and perfect timing. But here, TRTC hits a home run.

The 90-minute show without an intermission keeps the audience’s belly laughs coming nonstop.

The masterfully written play by Bruce Arnston includes original country lyrics and music which could be ideal for a comedy album. (Bruce, take note.) TRTC Director Patrick Holloran asks the audience to for a big “yee haw.”

With exuberant performances by Christopher Keener, a Crystal Palace alumnus as Doyle, Basalt local Sonya Meyer as Debbie and Patrick Fagan as Buddy, their guitar playing musician, (and in his 27th year as an instructor at Snowmass ski school) the audience was well rewarded for attending opening night.

A viewer is taken into this low-brow world and feels like being actually in Nashville watching the ill-matched duo make war and love. The character Buddy is the perfect foil for these two.

Doyle is a drinker and a cheat. Debbie first appears as a sweet, innocent petite woman, but she packs a wallop when cornered. Her three young kids (she is presently unmarried) wait in her car parked outside. A hilarious yelling match between momma and kids takes place over a walkie talkie.

A neon sign above the wood panelled stage proclaims “Station Inn” — presumably announcing the venue. Flashing lights emphasize the ribald action to come. And guess what? The real life Doyle and Debbie team do perform every week at this location in Nashville.

The backstory involves an 11-year hiatus from performing by the three. Not surprisingly, Doyle has had several different “Debbies,” over the years, one being his ex wife.

Doyle met his newest Debbie when she was performing at a VFW hall. HIs motives for choosing her were not quite innocent, but she makes clear on stage that nothing is going on between the two misfits.

The play is reminiscent of the Elvis Presley era with the over the top glittery outfits Doyle wears.  Debbie struts around in a Dolly Parton-style dress sans cleavage. This is old time country music, not the modern pop/country hybrid played on the radio today.

The show’s climax comes in two parts. First, Doyle recounts how his yodeling was his best trick to keep the ladies coming and then starts up again, turning Debbie into a puddle of unrequited love right on the stage.

The second part is a bit darker. As the audience has already learned, the recent death of Doyle’s dad still haunts him. And the ghost is still around as lights flicker and eerie sounds echo around Doyle attempted solo respite in his dressing room.

“Daddy” isn’t quite finished yet. Doyle has kept an old lunch box with a major souvenir from his father. That relic turns out to be hair, or more like a small scalp, which takes on a life of its own when freed from confinement.

Both Buddy and Debbie scatter when Doyle waves this memorabilia around high above his head. The hair wiggles on its own, quite an “uh oh” moment. Then, with the “hair” safely back in its container, the group sings and laughs through several more tunes.