Trustees put rabbits back on the menu 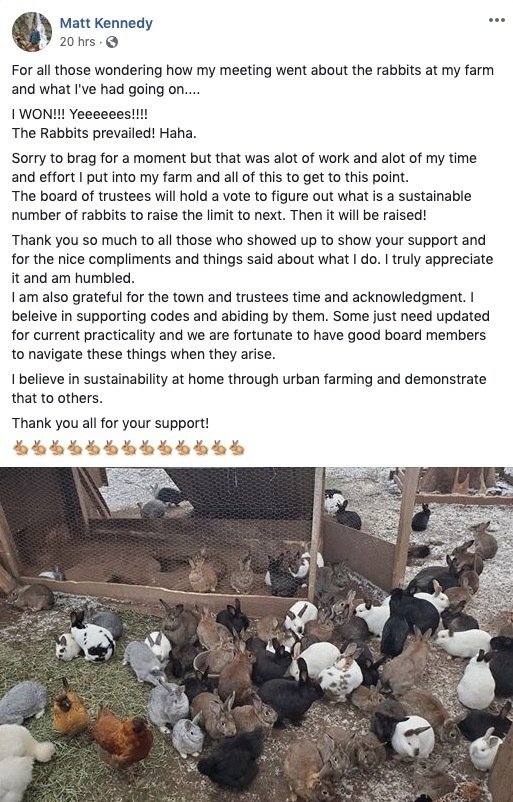 Although the agenda item for the Dec. 17 trustee work session wasn’t just about Matt Kennedy and his rabbits, it certainly was the catalyst.  Kennedy was cited over the summer for having far more than the three rabbits currently allowed under code. He has pushed trustees to reconsider, contending that the regulations were outdated and designed for pets rather than urban farming, which he thinks Carbondale should support.

Genevieve Villamizar agreed.  “In a lot of ways I’ve always loved Carbondale because it reminds me of everything I learned watching Sesame Street growing up,” she said “Matt exemplifies that.” Russ Criswell had a different perspective, describing the neighborhood impacts of odor, waste and stray animals.

Caught in between, the trustees had to decide whether to shelve the issue (as they had once before) or put it on the agenda for a regular meeting. While there was enough support to continue the discussion, the trustees differed on solutions. Erica Sparhawk pointed out that the Climate Action Plan encourages food sustainability. Luis Yllanes suggested mirroring the chicken polices crafted in 2015. Heather Henry was mostly concerned about the distinction between home husbandry and commercial agriculture, while Lani Kitching was more concerned about the distinction between rabbits for slaughter and chickens for eggs. And Mayor Dan Richardson wasn’t entirely sold on any large scale agriculture in the center of town. “Our code isn’t written so that everyone can be self sustaining on their own property, and I think there are reasons for that,” he said.

Kennedy says his rabbits will be butchered as soon as an appointment can be made, and after that he plans to work within whatever restrictions are still in place. His citation case is also pending.