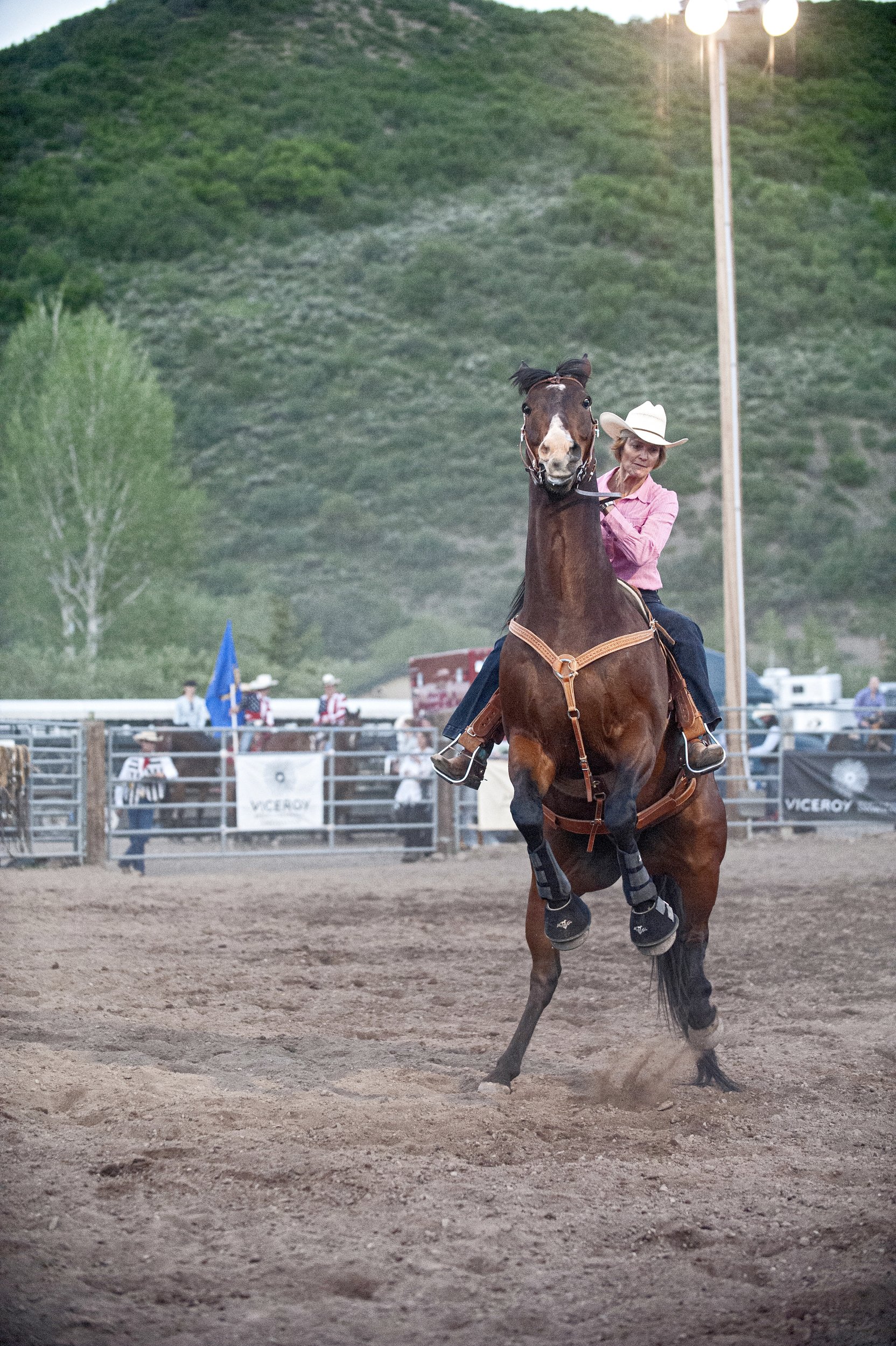 This woman for all seasons rode like a cowgirl, prayed devotedly and, unbeknownst to many, served in both the Colorado State House of Representatives and the Colorado State Senate. Many in Missouri Heights, where she and husband Harold lived after moving from the Front Range, only knew Arnold as an accomplished barrel racer at the Carbondale and the Snowmass Village rodeos. She amazingly took up the sport in her 70s. In 2015, Arnold clocked a barrel race time of 17.10 seconds, right in the middle range of the much younger competitors.

Arnold died in December 2018, at age 77, after losing her battle with cancer.

Arnold’s favorite competitive mount was named Doc, a big, powerful bay horse. Watching them circumnavigate the barrels at breakneck speed was a hoot. She rode as one with Doc like a woman who grew up in Manitou Springs in El Paso County, which she did.

Besides riding horses, Arnold attended the Snowmass Chapel regularly and served on its Board of Trustees.

When asked to describe Arnold, her friend and neighbor Lynn Engel said, “She was simply a good person who was kind to everyone.”

And Colorado remembered her, most recently at a memorial in the State Capitol in both the House and Senate. Both chambers are awe-inspiring with marble finishes that have been completely restored. One staircase had cannon balls refinished with brass as balusters. Huge circular staircases mark the entrance to the upper floors.

She had made her mark on the General Assembly in Denver where her former colleagues called her “strong and tough.”

Former Majority Leader and State Senator Norma Anderson recalled, “She was a marvelous person and an excellent legislator who reached across the aisle to work with Democrats.”

Anderson continued, “She made all of us work hard. Trust me.”

To Arnold, Anderson explained, “It didn’t matter what your party was, just about who you were as a person.”

She was the first woman to chair the State Senate Judiciary Committee and went on to win the Lieutenant Governor’s seat in the Republican primary election in 1986. She and her running mate Ted Strickland lost in the general election to then gubernatorial candidate Roy Rohmer.

She also brought in a feeling of “hootenanny,” said former State Senator Harry Gorman, referring to the large summer gatherings she and Harold hosted every year or so in the mountains of the Western Slope.

Arnold also later served as Director of Public Policy for the Children’s Hospital in Denver and Executive Director of the Colorado State Republican Party.

Arnold then began working as a lobbyist for US West, a telecommunications company. One senator recalled asking how she would be able to vote on any particular controversial issue.

Arnold replied, “I would never work on anything that I would not have voted for if I was still in the Senate.”

State Representative Pete Lee recalled something Arnold did on her very first day, “She wrote down why she ran for office in the first place. “She kept this note in a drawer at her chamber desk. Arnold took it out and reread it whenever she had a tough vote ahead.”

After the legislature, Kathy turned her attention to her alma mater, the University of Colorado in Boulder, where she graduated with majors in history and political science. She was elected to the Board of Regents. She served for six years and became Chairman of the Board. She was later named Regent Emeritus.

Kathy also served as Director of Public Policy for Children’s Hospital in Denver and Executive Director of the Colorado State Republican Party.

Arnold, in her last days, said, “Love bears it out, even to the edge of doom.”