Mutt & Jeff: A photo of a real pioneer 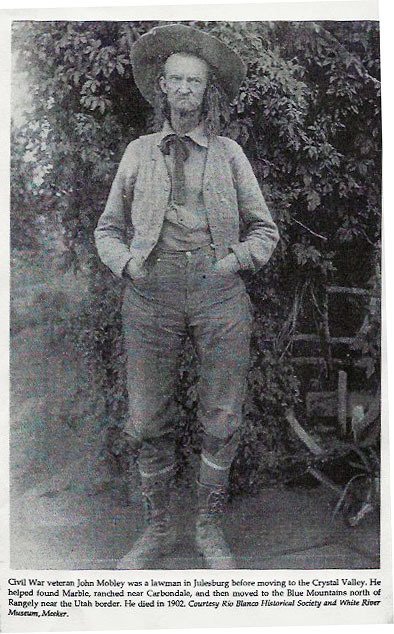 While having surveying done 41 years ago prior to building our home in the Crystal Valley, the surveyors showed us a map of the area from the 1880s.

It indicated a spot about 3/4 of a mile upriver from us labeled “Mobley’s Corral”. This was new to us because the local name for that spot was, and still is, Janeway. Some 30 years later, our daughter stumbled into a photo of a Mr. John Mobley in a textbook describing him as a resident of the Crystal River Valley.

As you can see, that photo is worth a thousand words. Several of his descendants are still in the area including his 92-year-old grandson Carl Mobley, of Silt, whom we recently interviewed.

Here are some highlights of John’s story:

Born in Ohio in 1861, John lied about his age and joined the Union Army at the age of 16. Afterwards, he moved west and served two terms as sheriff of Julesburg, Colorado, probably between 1870 and 1880. The next thing we find is that in 1880 he is exploring the Schofield Pass area and awaits his wife, Julia and four children, who arrived by mail stage via Gunnison and Crested Butte.

Some reports say he had to dismantle their wagon and pack it in pieces on burros to complete the trip to where Marble now sits. One child was riding in panniers on a burro that spooked and ran down the trail, but it was stopped by Wm. Woods, a miner who became known as one of  Marble’s founders.

Mobley plotted some home sites and called it “Clarence.” Wood plotted some adjacent sites and called it “Marble.” Eventually, they consolidated and the two remained as Marble. Marble was at the confluence of Carbonate Creek, which substantially flooded Marble in 1941, and Rock Creek, which was, apparently, unilaterally renamed Crystal River by the soon to be defunct Aspen and Western Railway in 1886.  It wasn’t officially re-named Crystal River, however, until Nov. 22, 1901.

Within a year Mobley had the itch to move again and by 1881 had moved his family to the confluence of the Crystal River and Avalanche Creek where he established a small settlement — “Mobley’s Corral.” Here, he petitioned for a Post Office which was commissioned in August of 1887. By 1888 about 50 people had settled there. This was too crowded for Mobley, so he sold out and hauled the family downvalley to a quieter spot near Carbondale, where he took to ranching. At this time, Carbondale had only about 20 families.

Sometime between 1897 and 1902 (different accounts are recorded) he got the itch to move again and sold the ranch, took the cash and bought 75 horses and over 100 head of cattle and headed, family and all, for Nevada. A bad winter stopped them about 25 miles northeast of Rangely along Wolf Creek, and, as John was getting a few years on him, he decided to settle nearby.  Still today, topographic maps show a “Mobley Place” near Wolf Creek.

There isn’t room here to tell about their encounters with Indians, but John’s grandson, Carl, informed us that both John and his son Chester learned to speak the Ute language. Different dates of his death are claimed: some say 1902, a “family tree” account on the internet states 1906, and an account in the Rifle Tribune of 1980 states “sometime in the ‘20s.”

For a really funny story in his life that happened at the Hotel Colorado look up “Tubercular Gunfighter and a Real Pioneer” on the web.