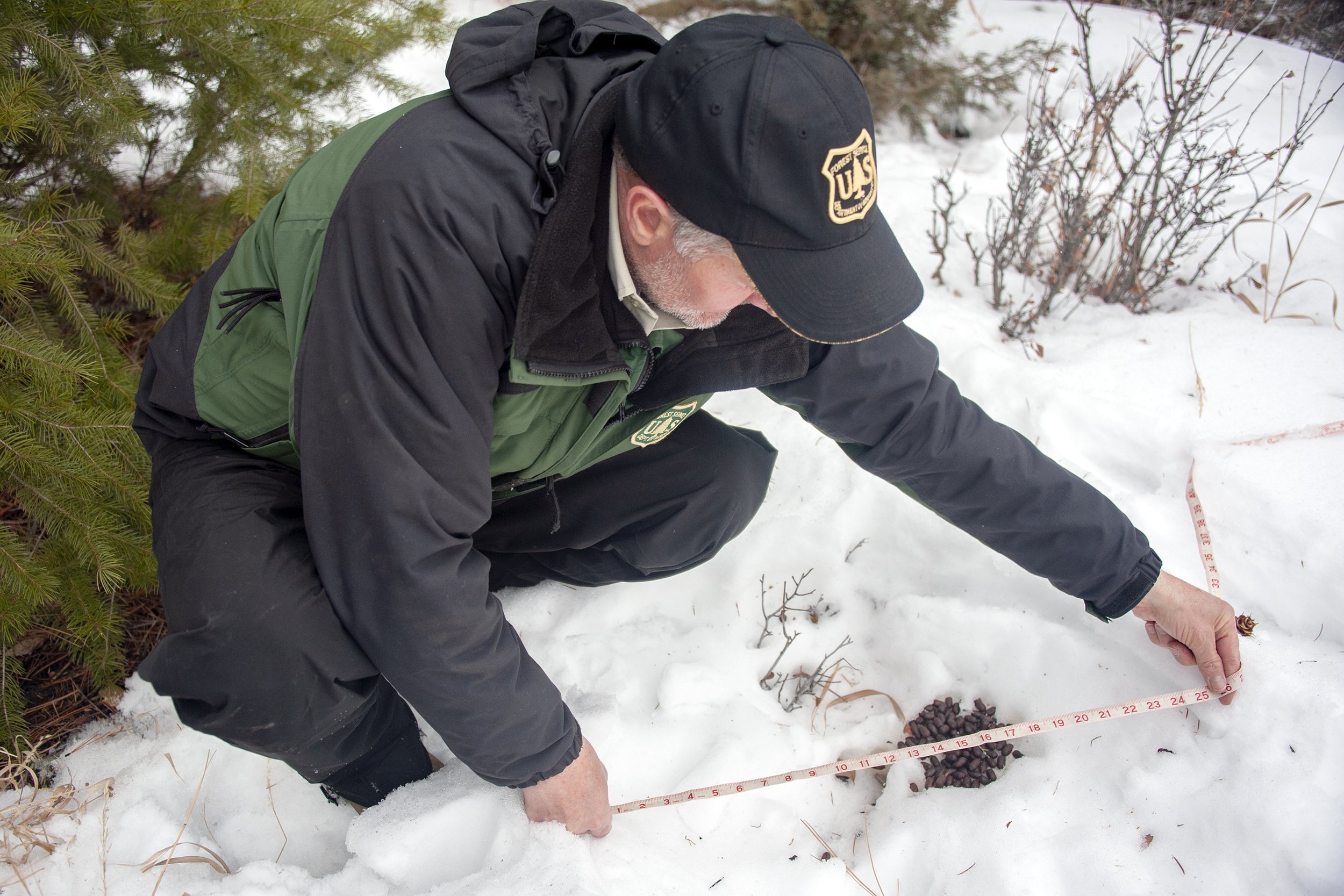 That famous line from J.R.R. Tolkien’s The Fellowship of the Ring, “not all those who wander are lost,” fits in quite well with the Carbondale culture.

People here meander through forests, mountains, waterways and the high desert environment not necessarily searching for anything in particular but just hoping a “treasure” appears.

And that welcomed surprise could just be mountain lion or moose tracks in the snow or clearly defined in dried mud.

Searching and finding wild animal tracks or scat (feces) is an interesting hobby but also an important part of the job for both Colorado Parks and Wildlife (CPW) and White River National Forest (WRNF) biologists.

Going out for a look see with CPW District Manager John Groves, who monitors both people and animals, became an adventure while traipsing through deep snow near Marion Gulch. Groves, who has been wildlife manager for 15 years, explained he often has to focus as much on people as on animals.

Groves, also a police officer, noted he may run into situations where humans are not following the rules, “As our population grows there’s more potential for conflict and controversy.”

Plus, he also wears the hats of biologist and educator while monitoring animal habitat and activity.

Groves motioned toward a series of elk tracks heading off in one direction. “It could very well be a small herd. Animals move to lower altitudes during the winter and then head up to the mountains as temperatures warm. And where the mule deer go, mountain lions follow.”

Winter offers a great opportunity for biologists to locate the hibernation dens of bears who wear  signal collars, “As cubs are born during January and February, we weigh and measure each animal.”

WRNF Wildlife Biologist Phil Nyland stressed the importance of scale. “ I carry a ruler and a tape measure so when I find a track I place the tool next to the track so we can determine the actual size.”

While hiking near Avalanche Creek, he also discussed the usefulness of measuring “stride,” the distance between tracks of either the right or left foot, not both. This determines the size of the animal and the speed it’s moving.

Nyland said trackers need to work through a process of elimination.

How large is the animal? Large tracks indicate large wildlife.

Is this the species’ usual habitat?

Does the scat match the animal’s profile?

Are claws seen or not? (Cats can retract their claws; dogs don’t.)

Is the shape of the track and the number of pads on the bottom of the foot different from what a tracking guide shows?

Then there are bears.

Colorado is home only to black bears, not grizzlies. Bear tracks have five toes on the front and hind feet. They’re larger than most other tracks in this category, which makes identification fairly simply in ideal conditions.

According to Wikipedia, likely the only time a bear is misidentified is when one of the five pads gets obscured, making it possible to confuse this track with a mountain lion or domestic dog.The other big clue for bears is the negative space between the toes and heel pad, forming a single arch separating all five toes from the main pad in one smooth arch. Negative space is a great way to distinguish bear tracks when the toes aren’t 100 percent clear.

Nyland and Groves both agree anyone interested in tracking should consider carrying identifying field guides. Books by Jim Halfpenny are highly recommended.

New to the tracking world, Nyland noted, is Environmental DNA (eDNA), collected from a variety of samples including snow, rivers, lakes, seawater, or even air. Other substances tested can be  and can include scat, mucus, hair, skin particles, or carcasses. As various animals connect with their surroundings, DNA is released and accumulates in the environment.

Nyland showed how a large scoop gathers the area around and under the track. Then, special laboratories analyze the contents.

“This advancement allows us to gather and study specific information including sex, age, diet and behavior,” Nyland added.

How can someone learn to identify tracks? By reading, asking questions and getting out there. Groves noted the best surfaces to find tracks are mud, snow, sand or any powdery material. Trackers agree the Aspen Center for Environmental Studies (ACES) is a good resource.

The National Wildlife Federation on blog.nwf.org explains how to look for tracks in your area. A smartphone app, “Itrack Wildlife,” also helps with identification. Check out naturetracking.com for details.