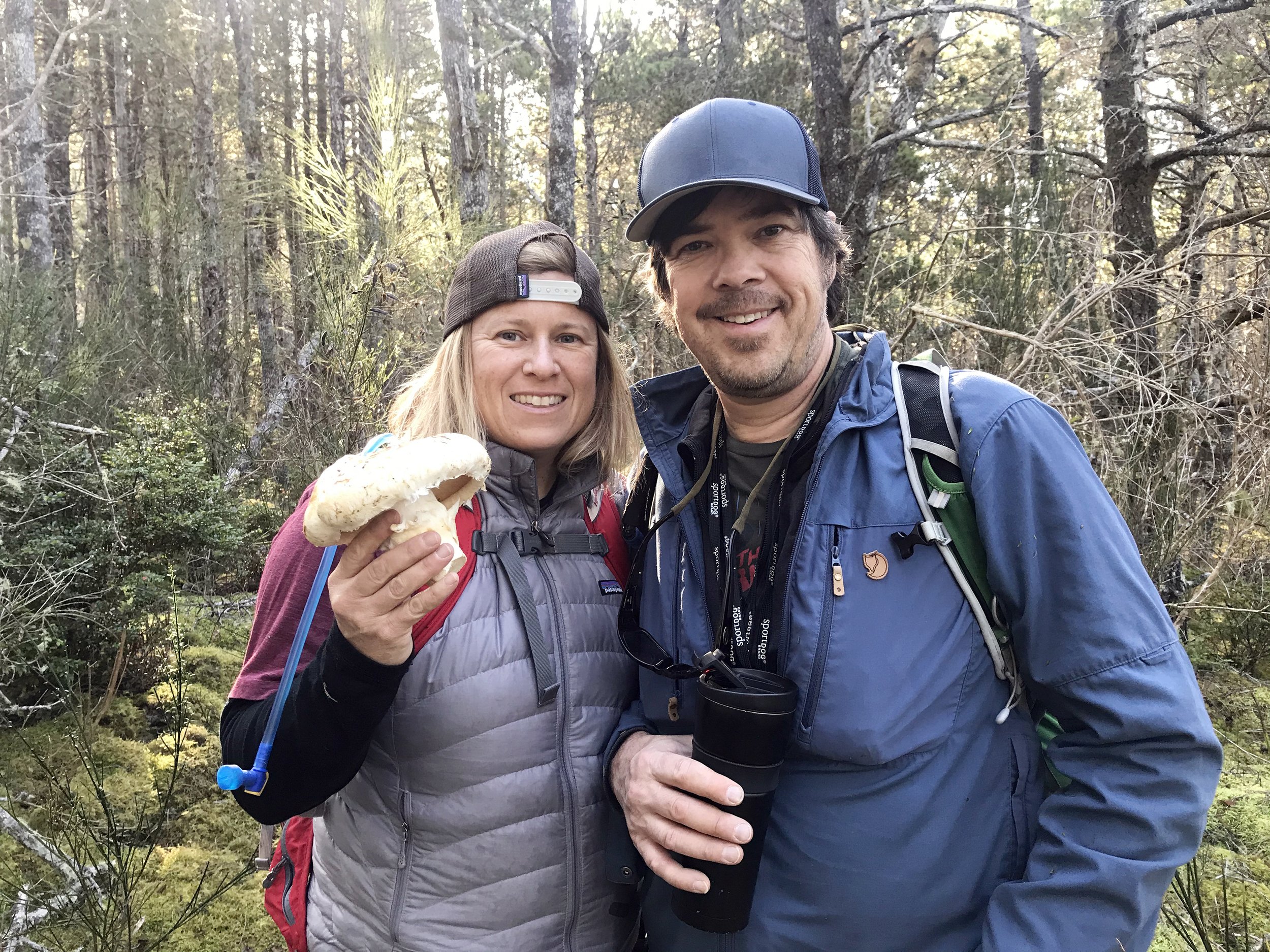 Merriam-Webster defines “symbiosis” as an interaction between two different organisms living in intimate association, typically to the advantage of both.  Think of Nemo, impervious to the sting of sea anemones, taking refuge within its tentacles. In thanks, Nemo scares off predators of the anemone; his wastes nourish the anemone.

Trent and Kristen Blizzard also enjoy a symbiosis of sorts in a regeneratively affectionate and adventurous marriage. Combining complementary skills, they work together remotely, successfully. Attending to primal urges for “the hunt,” for deeply meaningful connections to the land, the Blizzards road trip often, including campouts on a coastal piece of land purchased to extend their foraging possibilities. Their obsession with mushroom hunting, in particular, has led to their high-traffic blog, Modern-Forager.com.

What began online and long-distance evolved into a life together.

Kristen was working at Avon’s Walking Mountains Science Center when she was first introduced to foraging for wild edibles and mushrooms. Trent, living in Glenwood, was also intrigued when an avid foraging friend and elite athlete, Tigran, generously offered to take Trent out.

“We went on an eight-mile hike, like up, up, up! I’m gasping; he worked me. Two hours later, we’re back at the car and we hadn’t found a thing. We crossed to the other side of the road and they were everywhere. He hazed me!” Trent howls. “He took me on a two-hour exhausting hike when he knew the whole time there were mushrooms right there! And so we picked all the mushrooms we wanted in half an hour.”

As Trent continues with their “turning point” story, he and Kristen finish each other’s sentences, tag-teaming in the telling.

“It’s early afternoon at this point, so we drive back home, an hour away. I call Kristen on the phone, she gets in the car, and we drive back up!” Trent says.

“The same day because we both had wanted this!” says Trent. “Then on? We were hooked.”

“They were everywhere. It was one of those years everything aligned: the weather was good; it was warm; we got a lot of rain. And there was ton of mushrooms everywhere. That was it because of that day. We were in complete awe,” says Kristen.

Having met them only moments ago, I note the way they look at one another. Definitely chemistry. They share laughter,  touch one another. They’re telling this story not just to me, but to each other still, six years after the fact.

“We went up and explored that area every day in a row, for weeks!” Trent says.

“It’s magical up there,” Kristen sighs. “It’s pretty common for people to name their mushroom places. We named this place “Mushroomtopia” (which is silly) because they were just everywhere, and it was all the mushrooms; they all tend to enjoy the same habitat. So it was porcinis, chanterelles, hawks wings, lactarius, and mushrooms we didn’t even know at this point!”

“We were early in our dating at that point; we were hunting mushrooms and falling in love,” says Trent.

“We indulge this passion in each other. I have a weird idea for something on mushrooms and she’s like, yeah, let’s go do it!”

This is a second marriage for them both. They’ve learned what they do and don’t want from the first marriages.

Both choose to use adversity as a source of nourishment for growth — somewhat like the porcini, whose root threads interlink with the roots of spruce, or even directly on a decaying spruce tree stump.

“Many of the mushrooms here in Colorado are mycorrhizal,” says Kristen, “growing in symbiosis with a specific tree. They won’t grow without that tree.”

“Which is very rare,” Kristen interjects.

“In the East Coast,” he finishes, “they’ll grow with deciduous trees.”

Kristen then dives deeper into the mysterious underworld of mushrooms.

“Mushrooms are the information agents of the forest. So, their mycelial network, which looks like roots, sort of like a white, webby network — you can see it everywhere beneath the soil — connects with the roots of trees.”

Some of us will recall Suzanne Simard’s research from the late 1990s, where she used radioactive carbon isotopes to prove that trees communicated.

They do so through these mycorrhizal networks of fungi, their mycelium “roots,” and tree roots, back and forth and even between species.

Listening to Kristen discuss this, her reverence for this social network of connection and sharing is palpable.

“One of the things I like best about this hobby,” she adds, “is the people that you meet. It is the most diverse set people that will find anywhere— crossing political and economic lines, young and old, men and women. These mushrooms bring people that would never be together, together.”

“Great friends, from all over the place,” Kristen says, sharing stories of the Oregan land where they camp and hunt with new friends; describing friends around the country and locally —  chefs, naturalists, writers, artists, scientists — all connected through mushrooms. “These people are so genuine and willing to share. It’s more of a collection of people, to be honest than a collection of places.”

The Blizzards travel to fungi festivals and often present to the public. They’ve written a mushroom primer; are but two of a handful of people in the state of Colorado with commercial licenses. They’ve cultivated solid reputations.

So much so, they were approached by publishers to write a book.

“We’re working on a cookbook of sorts,” she admits, clearly not wanting to brag. “It’s not just recipes. There’ll be about 25 foragers and we’ll highlight their origin stories and how their passions got fueled.”

They’ll share mushroom lore, insider techniques, and showcase 10 of their favorite species. The mock-up of the book is luscious, rich with their own beautiful mushroom photography. With a due date two months away, they’re crossing their fingers for a Christmas release.

“We’re writing together. It’s weird, I don’t know — we work together, spend all of our time together — we have yet to get sick of each other. Having the perspective of dating, and been married and divorced, when I met Trent, instead of this feeling of here’s a man very opposite of me, I had this feeling of, wow, we’re very similar. He’s like me in a man’s body,” she laughs. “We have the same family background, we like the same things,  and we have the same sort of temperament.”

“I think on our first date, we had a lot of, “Wow, we have a lot of things in common!” and then another thing, and another thing,” Trent says, as he describes a perfectly horrible date— excellent company, bad food, really bad karaoke.

As organisms, the golden chanterelle, feathery hawks wing and the like are in a kingdom of their own. They are a fungus — not a plant, not an animal. They don’t release oxygen. Don’t need sunlight to photosynthate. Instead, they feed off of, metabolize, dead plant matter, just as a compost pile does.

“We always say this: we don’t think it would have worked as well if we hadn’t met each other carrying the baggage that we do. All that past history works because we’ve chosen to learn from it. Every day, we appreciate each other for different reasons than people that haven’t been through some craziness,” she says. “We can be so much more thankful for who we are together.”

“We worked hard to use our baggage productively,” Trent agrees, composting refuse to produce riches.

Marriage and careers, obsessions and temperament. With a symbiosis that defines and sustains them equally, it would seem the Blizzards, too, are in a kingdom of their own.