A brief history of the ‘dog park’ 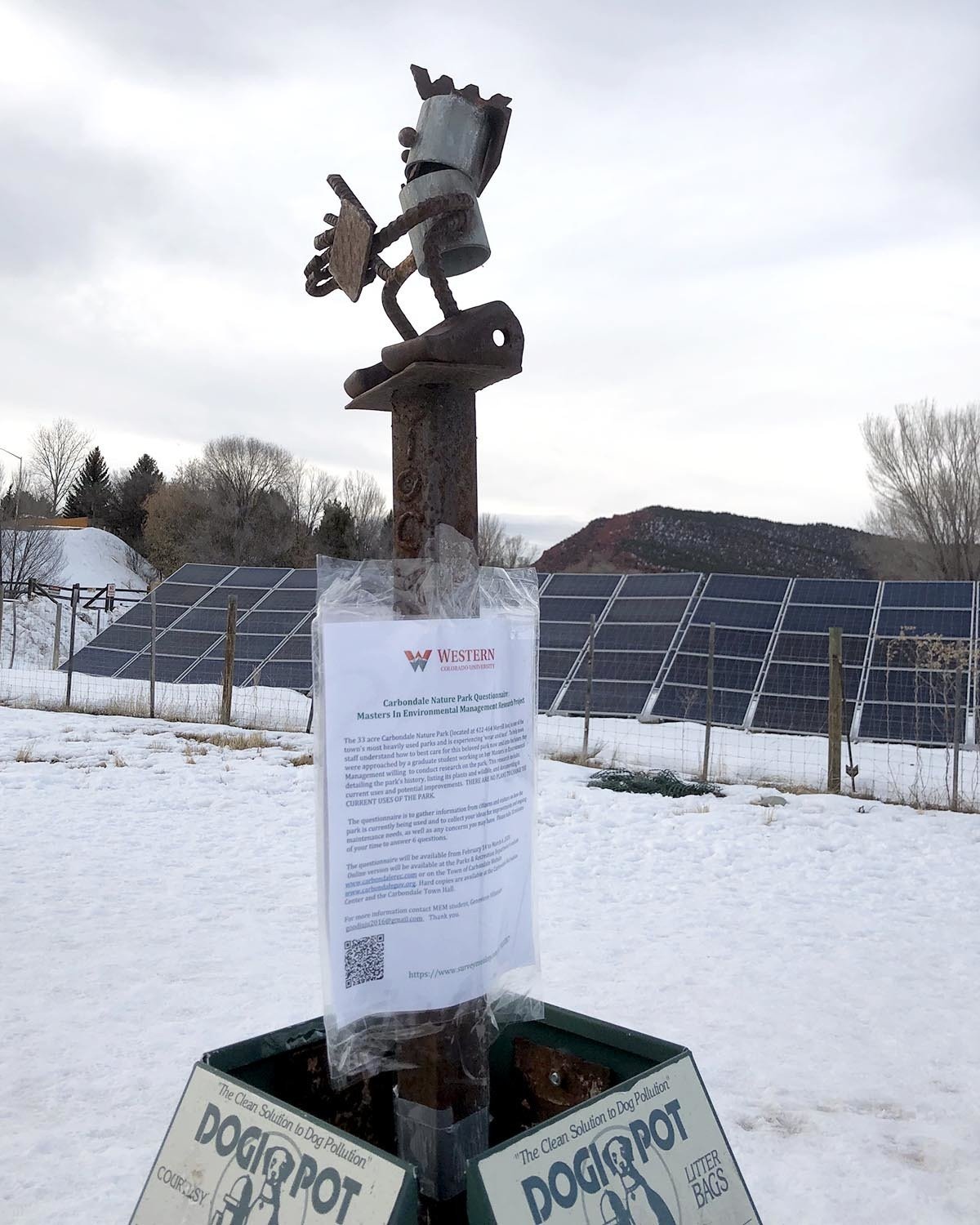 Contrary to the article in the Jan. 9 edition of The Sopris Sun, the Carbondale Nature Preserve was purchased outright from the previous owners, the Delaney family. A clarification was published in the paper the following week, but we thought it would be useful to our readership to delve further into the origins of Carbondale’s most popular park, with an update on where things now stand with it.

The impetus for acquiring more greenspace in Carbondale dates to the Town’s 1997 Parks & Recreation Master Plan, with its stated goal of increasing the ratio of parkland area to number of residents to seven acres per 1,000 people. It meant that Carbondale needed to more than double the area of its existing parks.

To finance that objective the Town approved a half-cent increase in the local sales-tax rate, which raised several hundred thousand dollars in revenue. Carbondale also applied for and received approval for a $75,000 grant from the state’s Great Outdoors Colorado (GOCO) fund to be used for purchasing more parkland.

Over the next few years, several available locations were considered, including a site on the southeastern edge of town that later became the multiuse North Face Park. Eventually, though, the large Delaney parcel in northeastern Carbondale was chosen as the major open-space area to add to the park system.

Acquisition of the land was complicated. There was considerable discussion and negotiation with Robert (Bob) Delaney, the owner, which included securing a quit-claim deed on the parcel’s water rights (established by a 1956 court case) in addition to the warranty deed for the property. Also, the Town successfully obtained GOCO’s permission to apply the $75,000 grant for the parcel’s purchase.

Ultimately, the funds from GOCO and revenue from the sales-tax levy were combined to reach the final purchase price of $500,000. Carbondale took possession of the roughly 33-acre parcel in October 1999.

As mentioned in the previous article, in the early 2000s the Town undertook a concerted review process on what to do with its new park that included conducting a public survey and developing a comprehensive and ambitious master plan for creating a nature preserve. However, there was no money to implement the plan.

Other than developing an archery range at the far south end of the parcel and making some minor improvements to the rest of the area (including erecting an electric fence to separate the park from pastureland to the east, creating a small parking lot and adding a handful of benches), the land remained largely undeveloped. Some of the parkland was given over to building a new municipal water-treatment facility (completed in 2001), and a solar array to supply power to it was added in 2013.

Local dog owners realized that the park’s generally confined space afforded them the opportunity to run their pets off leash – which at the time was technically illegal – and the park grew to become the town’s most heavily used greenspace. In 2008 Carbondale trustees debated whether having dogs off leash in the park should be prohibited. By early 2009, however, they had decided to officially designate the park as an off-leash area, but with strict guidelines on how pets and their owners were to conduct themselves.

Yet both the town’s Parks & Rec Department and the citizen-led Parks & Rec Commission remained concerned about degradation of the park’s landscape and the growing presence of noxious and invasive plants. Little could be done about either, though, because of the department’s limited funds.

In the fall of 2019 Genevieve Villamizar began working with Parks & Rec on her master’s degree project. The initial idea was for her to help develop an integrated management plan for the park. The first phase of that involved creating a parks-use survey. However, concerns were raised by some commission members and dog owners about the nature of the project, and the survey that was presented to the commission was not approved at the commission’s Jan. 8 meeting.

Villamizar and Parks & Rec Director Eric Brendlinger subsequently reduced the scope of her work to simply a research project without the management-plan component. A revised and simplified survey was drafted and submitted it to a number of “stakeholders” for comments and suggestions. It was then presented to the commission at its Feb. 12 meeting.

In a close vote, the commission approved it for release to the public, though, as Brendlinger noted, “The name was changed to a questionnaire.” The questionnaire was scheduled to run online between Feb. 14 and March 6 on Survey Monkey at both the Carbondale Recreation Center website (www.carbondalerec.com) and the Town website (www.carbondalegov.org). In addition, hard copies are available at the Town Hall and at the Rec Center during that time.