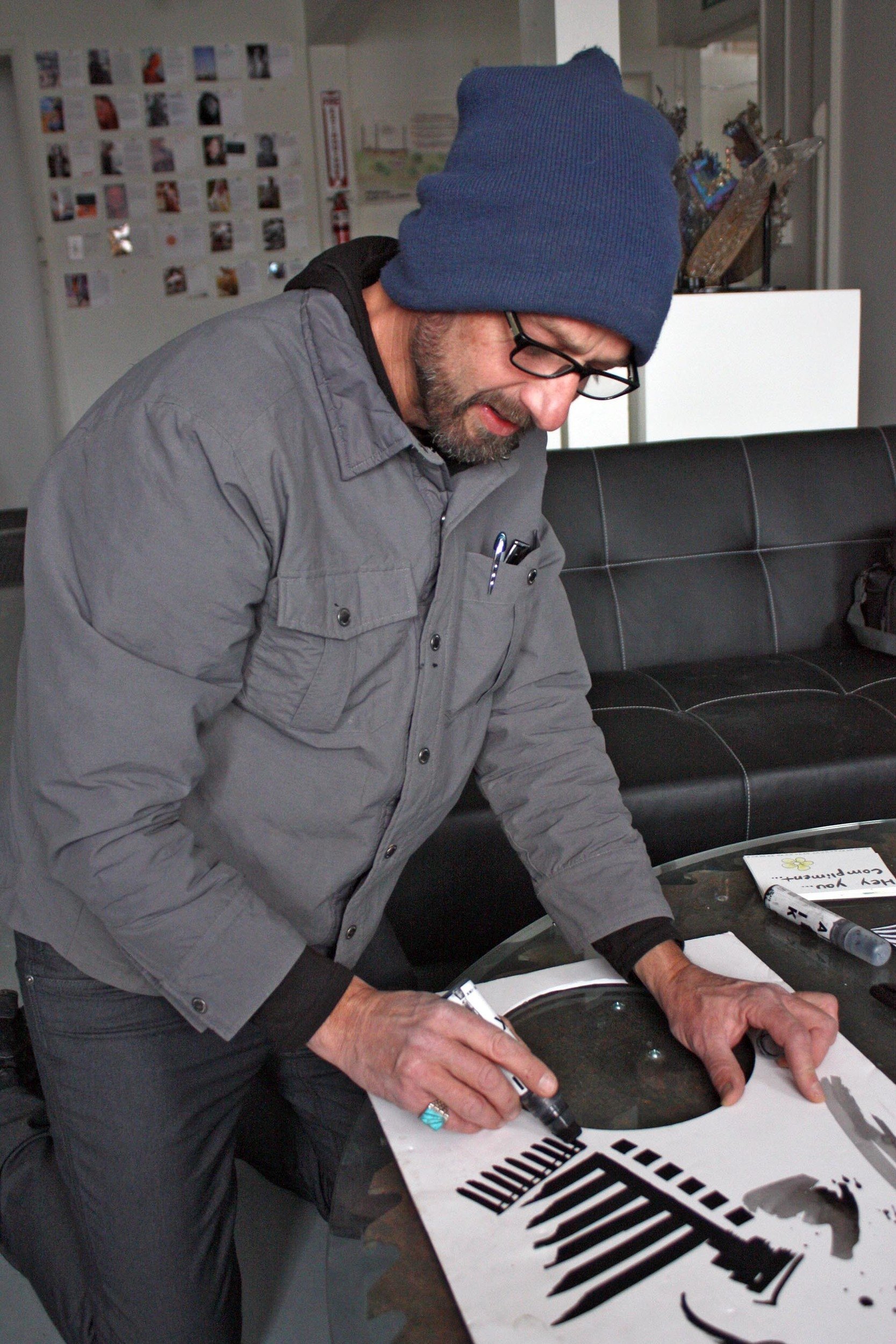 As part of its month-long Imagine Climate initiative, the Community Office for Resource Efficiency (CORE) will be hosting two Climate Billboard Community Kick-offs, unveiling four new black-and-white bilingual public art pieces in the valley. Though the pieces have been done by different artists and will be displayed in various locations, they all share a common slogan: “This art is made from carbon emissions / Esta pieza esta hecha con emisiones de carbono.”

Each billboard was created using markers containing AIR-Ink, a new medium invented by Anirudh Sharma at the MIT Media Lab. “There are factories around the world that are burning fossil fuels to make black inks that we use on an everyday basis,” Sharma said in his 2019 Ted Talk. “But given that millions of liters of fossil fuels are already being burned out there … what if you could capture that pollution and use it to recycle and make those inks?”

Sharma’s question led to AIR-Ink and the founding of Graviky Labs, which continues to produce the ink. The lab makes one fluid ounce of ink from about 45 minutes of diesel engine pollution that, in turn, makes one marker. Chris Erickson, one of the Carbondale billboard artists, said he used less than two markers to create his 8’ x 8’ billboard. Though he was skeptical of the ink’s quality when he agreed to the project, it was, pen-in-hand, “so fantastic.”

There is a pointed commentary behind creating billboards — often seen from highways — with vehicle emissions. Erickson, who has already been working in black-and-white in his recent collection, looks to create art with a flat, dense, and saturated finish. Using the black-and-white scale in his work, Erickson said, is a “statement on the binary culture we live in [where] everything is very black and white and right and wrong. I really wanted to play with that.”

Brian Colley is the other Carbondale-based artist who will have a billboard on display. While he works primarily in painting and printmaking, he called on his background in watercolors for this project. He found the ink was “very versatile stuff” that could be diluted and used with brushes and cloths.

“I’ve never painted with carbon emissions. Who gets to do that?” Colley asked. “I’ve created a giant monster made out of cars,” he said with a laugh. “Carzilla, if you will.”

Erickson says his billboard “is a statement on industrialization” that “dovetails perfectly with the whole pursuit of the AIR-Ink agenda.” Serendipitously, the project also dovetails nicely with a personal construction project. Erickson had already been working with CORE on creating a more sustainable heating plan for his home when they approached him about the Climate Billboard project.

There is significant overlap there, as the art supply and construction industries share similar challenges in sourcing sustainably-made materials. In this case, CORE’s initiative connects dots between the two.

The billboard project is part of CORE’s second annual Imagine Climate, a month-long exploration of climate-based art born of the nonprofit’s 25th anniversary in 2019. Lara Whitley, CORE’s Brand and Creative Strategy Director, said that they aim to create shifts in the “systems and culture that are in place” around climate change, and that Imagine Climate “addresses the culture piece of that.” Another project under the Imagine Climate umbrella is their Reading List for a Warming World, curated by Aspen Words.

CORE first began collaborating with artists in 2017, in a project involving many community-members wearing snowshoes, creating large-scale visual art in a meadow near Ashcroft. Whitley described the Climate Billboard Project as similarly “deeply collaborative,” with more than four dozen speakers, artists, sponsors, and other partners involved.

The Carbondale kickoff takes place from 6 to 7:30 p.m. Tuesday, Feb. 25 at The Launchpad. AIR-Ink inventor Sharma will be in town to give speeches; the four billboard artists will be present to speak about their works during the digital unveiling and there will be live carbon labs, music, and refreshments. All four billboards will be in their temporary homes starting Feb. 25 — Erickson’s at Lion’s Park in Basalt, Colley’s at The Launchpad, Kelly Peters’s at The Collective in Snowmass, and Kate Howe’s in the Aspen Art Museum. Additionally, the billboards will be on display together for the first time at the 5Point Adventure Film Festival in April.