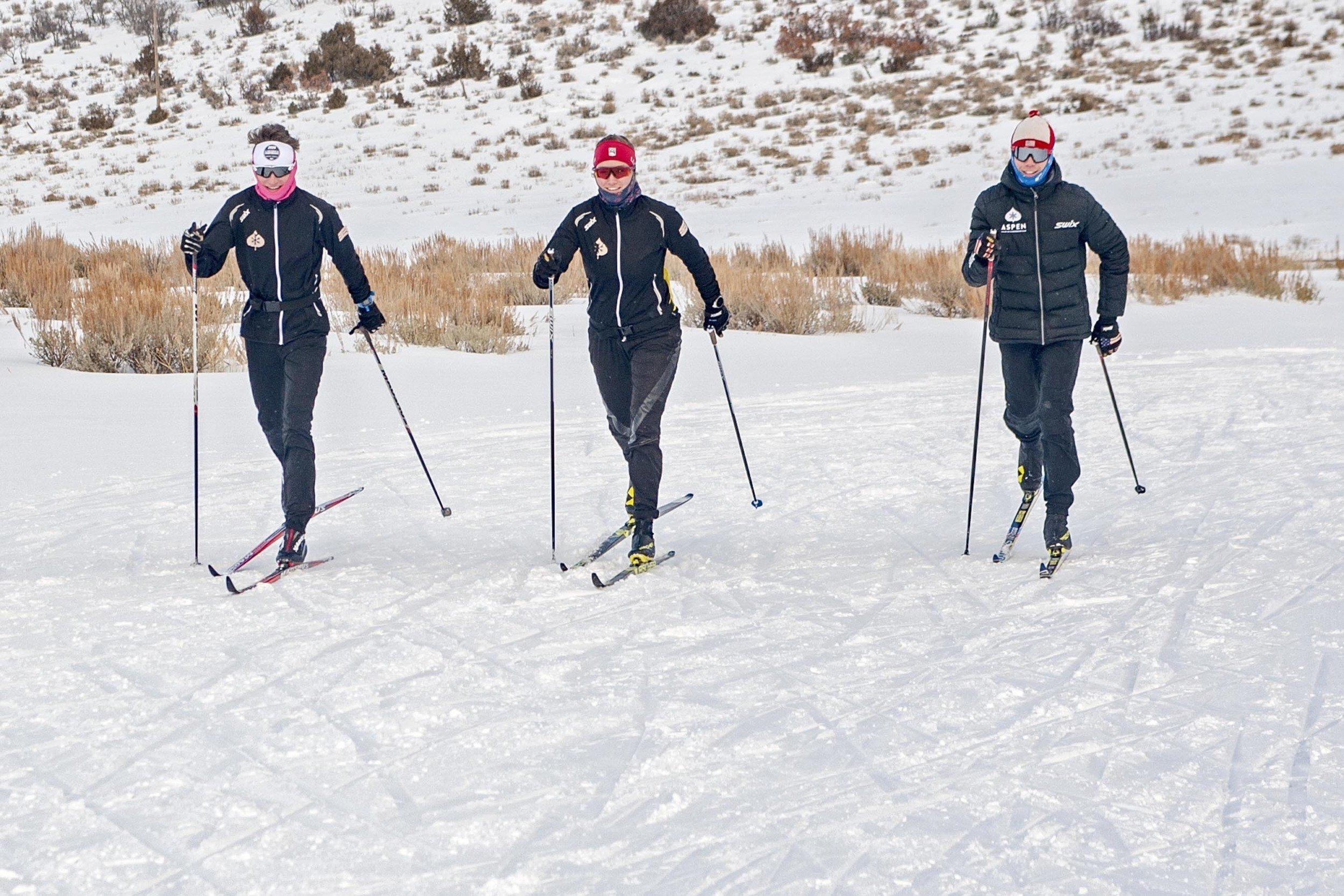 On a crisp, cold, afternoon at Spring Gulch Nordic Center, team members assembled for practice under the watchful eyes of Teague and his fellow coaches.

The Spring Gulch Trail System is a network of 13 miles (21+ kilometers) of professionally groomed cross-country ski trails, available to the Carbondale residents and guests. The Mount Sopris Nordic Council operates the center in partnership with private landowners.

Skier Kate Oldham, a senior at CRMS, explained she was drawn to Nordic skiing because AVSC has such a strong structural program. “I like that all ages can get involved and have terrific instruction.” Kate’s brother Ben also is a Nordic enthusiast.

After graduation she plans to attend Vermont’s Middlebury College and join its Nordic team.

Coach Teague described the AVSC program as attracting people of all ages from Aspen to Glenwood Springs and is a part of the Rocky Mountain Nordic organization which is holding under 14 years ( U14) championships at the Odin Sports Center at Powderhorn Mountain Resort Feb. 29 to March 1. Twenty-four AVSC skiers in the Devo (short for “development”) and Bill Koch programs will be competing in the championships, but races for all age groups are on the docket.

PreDEVO programs bridge between the Aspen Supports Kids program and the alpine and freestyle programs. It teaches mountain safety, lots of all mountain skiing, basic freestyle fundamentals, and an introduction to racing — a well-rounded experience for young skiers ages seven to nine.

AVSC also offers the National Comp Team, a year-round training and racing program for experienced Nordic skiers who have excellent work ethic and a desire to pursue excellence in Nordic skiing.

The Junior Nationals the following weekend will take place at the Auburn Ski Club Training Center, Soda Springs, CA with 11 AVSC skiers participating in these U16 and U18 events.

“We are very proud that such a large number of our kids have qualified to go,” Teague said, “That’s a record for us.”

Teague has directed and coached at AVSC Nordic for four years. Prior to that he skied while attending Colorado Rocky Mountain School (CRMS) and later at the University of Denver before returning to the Valley. August led the Nordic programs at both Whitman College and the University of Nevada, Reno. He then spent four years with the Australian Ski Team, leading them through two World Championships and one Olympic cycle.

“The program has grown under his leadership,” she said. Since he has been with AVSC last year was our biggest team going to JN’s with eight athletes and this year it grew again with 11! We almost had 12 as one kid missed making it by something like a 1/100th of a second in the last race.”

AVSC Nordic has a rich tradition of success. Recent alumni include two U.S. National Team athletes, two Sochi Olympic team members, two Pyeongchang Olympic team members and hundreds of exceptional alumni. The programs are designed to develop, challenge and engage athletes of all ability levels. All team programs are offered in Aspen at the Aspen High School Trails and in Carbondale at the Spring Gulch Trails.

Year-round competitive programs that include on-snow training from November-April plus conditioning during the summer and fall months. AVSC believes these “programs allow athletes to train and stay connected with teammates, coaches and AVSC while giving each the opportunity to be the best athlete possible.”

People sometimes use the terms Nordic and cross country skiing interchangeably, but this is not always accurate.

According to Wikipedia, Nordic skiing encompasses the various types of skiing in which the toe of the ski boot is fixed to the binding in a manner that allows the heel to rise off the ski,  unlike Alpine skiing, where the boot is attached to the ski from toe to heel.