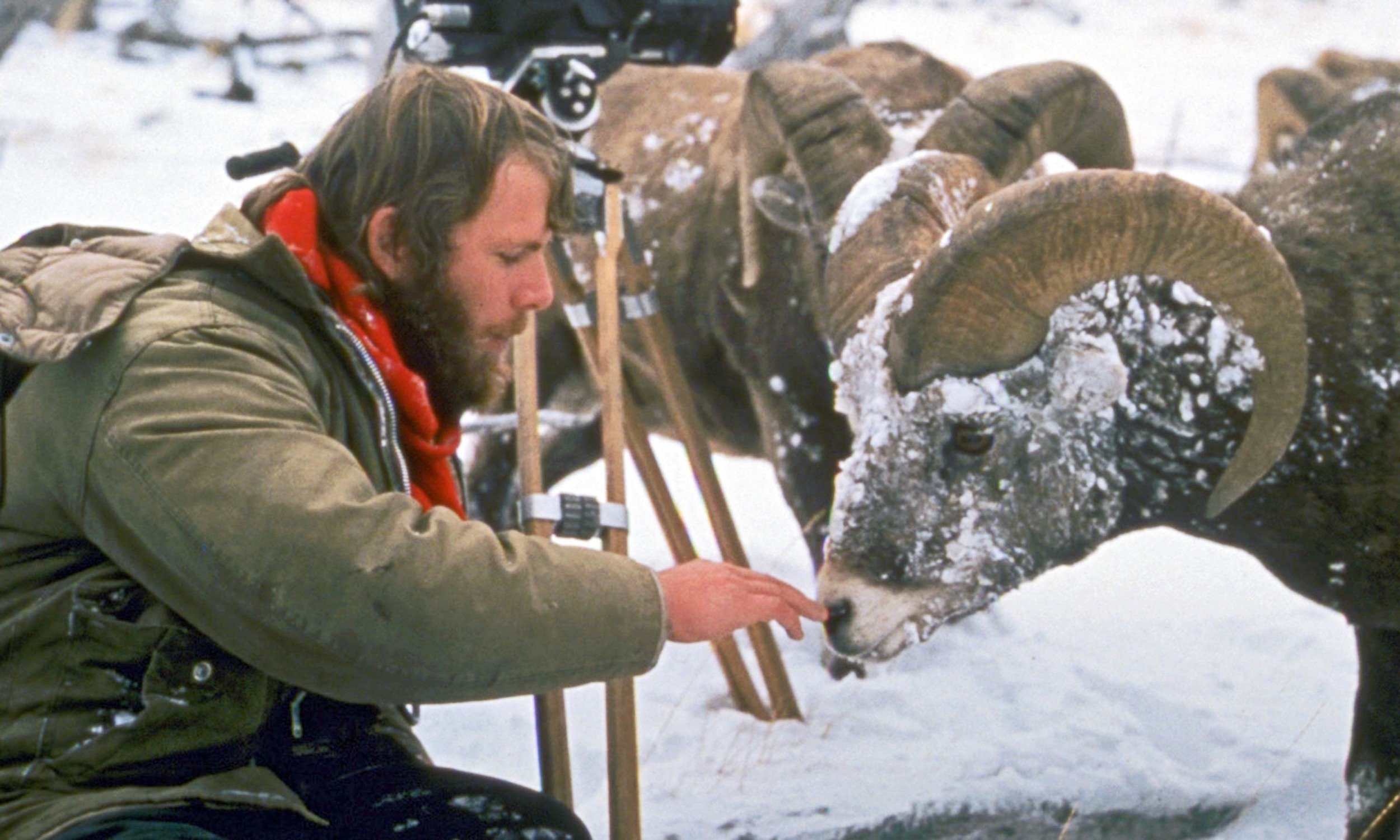 It was nearly two years ago, and my wife and I were trying to figure out how to get a heavy sofa sleeper out of our son’s pickup and into our house. A vehicle pulled up, a fellow hopped out and offered to lend a hand. Moments later, mission accomplished, we were thanking him and asking his name.

“I’m Marty Stouffer, and I’m famous. Look me up!” And with that, he was gone.

That unexpected encounter led to me pulling the assignment to interview the creator of and force behind the highly popular “Wild America” television series that was broadcast on PBS between 1982 and 1994.

On a frosty morning in early February, I found myself on the way to his spacious house a short distance outside of Carbondale. The interior was full of mementos of his lifetime of adventuring and making wildlife documentaries and other programs – mounted animal heads, a spear, old camera equipment.

Stouffer is voluble and cheerfully self-promoting. “I’m an entrepreneur, a raconteur … and probably, more than anything, I’m a storyteller. I believe that was really behind the whole film experience. The whole film career for me was like, ‘Hey, look at this! Come over here, this is something really incredible, I want to share it with you!’”

For the next couple of hours, I listened to stories about his background, his career and his long connection to the Roaring Fork valley.

Stouffer was raised in Fort Smith, in western Arkansas on the border with Oklahoma. He and his two brothers learned to hunt and fish at an early age. They also developed a passion for making films with an 8 mm movie camera.

During one of his breaks from college in the late 1960s, Stouffer and two friends spent the summer in Alaska hunting, fishing and looking for adventure. One prized memento of his time there is the head of a Dall sheep (now hanging in his office) that he had killed and subsequently subsisted on for almost two weeks while caught alone at a cabin in a blizzard.

More importantly, Stouffer filmed dozens of reels of film of the wildlife there with his Super 8 camera.

Returning to school, he edited the footage into a two-hour silent “home movie,” dubbed “Alaska – America’s Last Frontier,” that he showed to large audiences in Fort Smith and on his college campus. The success of that venture encouraged him to pursue a career in wildlife filmmaking.

Stouffer’s connection to Aspen began in the summer of 1968, during another college break, when he and friend David Speer came here to work construction. They worked most of the summer for onetime real-estate mogul Hans Cantrup excavating a foundation for Cantrup’s Continental Inn (now the site of the Hyatt Grand Aspen) and staying at the inn with 400 young female music students who didn’t want anything to do with “a couple of smelly Arkansas rednecks.”

Stouffer recounted an incident where he was driving the backhoe down Galena St. and popped a wheelie to entertain a group of hippies watching him.

The extra weight on the ancient tires blew one of them, and in his attempt to repair it, he got his hand stuck and had to wait until Speer arrived with another backhoe to lift up his machine and free it – all to the amusement of his spectators.

After graduating from college in 1970, Stouffer signed on for several months with an African safari company in Botswana, principally as the “second gun” – i.e., he often would be the one to kill and retrieve the heads and skins of hundreds of big-game “trophy” animals for wealthy clients. The experience deeply disturbed him, and he vowed to focus on filming wildlife for its conservation and preservation.

Stouffer did film his experiences in Africa, this time with a 16-mm sound camera. However, after returning to Arkansas and completing it, he found that there was little interest in “all these lions and elephants.” He continued, “My lesson from that is people want to see America and American wildlife.”

Stouffer moved to Aspen in January 1973 after having spent two years filming and producing a short documentary on bighorn sheep – creatures he had first encountered on hikes in the local mountains in 1968. His office in Aspen was in the same building as John Denver’s, and he and brother Mark Stouffer ended up filming portions of some of Denver’s television programs.

Mark, who also became a filmmaker, would go on to collaborate with Denver on several other television projects.

Meantime, Stouffer continued working on wildlife film projects, including his first commercial success, “The Predators,” narrated by Robert Redford, that aired on NBC in 1977. Another documentary, focused on Stouffer’s experience raising a grizzly cub (partly in his Aspen apartment, much to the annoyance of his neighbors) and later releasing it in the wild, was broadcast by ABC in 1978. Its narrator was Henry Fonda (a last-minute substitute for Will Geer, who had died).

The success of those two programs helped pave the way for Stouffer’s association with PBS and the long-running “Wild America” series. It also allowed him and his wife Diane to build a house about three miles east of Aspen in the mid-1980s, where they lived for 30 years and raised their two children. He noted, though, “It was a great spot, but it got a lot of snow.”

Since production of “Wild America” ceased in the mid-1990s, Stouffer has kept busy with syndication deals (pretty much at any time, “Wild America” is running somewhere on one of the four major broadcast networks), managing his film archive (stored in a vault in his basement) and new projects.

He would like to transfer all 120 half-hour episodes of the series to 4K digital resolution, but a Kickstarter campaign to raise funding for the venture was not successful. He added, “I would love it if there was a rich investor in this wealthy valley who realized the value of [his archive] who wanted to invest a relatively modest sum for posterity.”

Stouffer has also made more wildlife documentaries. “I have 20 new films that have been filmed and edited,” including one of a coyote and roadrunner and another of a jaguar in South America.

“But I don’t have the money … to finish the writing, sound [and] transfer to video. Again, he would welcome help from an investor to finish those projects.

He has also been looking into arrangements with such streaming services as Sling TV and the upcoming Quibi (set to launch in April).

He elaborated, “If I had one focus … it would be to go back to the ‘Wild America’ film library and edit short pieces that could be searched … say a thousand 3-minute pieces.” He believes he has film on nearly every animal in the Americas, engaged in all varieties of activities. He gave, as an example: one could access a clip of moose fighting or of a baby moose.

Stouffer quipped, “I’m shockingly busy for being unemployed! … A tremendous amount of it is trying to do deals with new media.” He continued, “I just signed up with … Monarch Films … and we’re working to get into this new OTT (over the top)” direct streaming service.

One less pleasant issue for Stouffer has been an ongoing legal dispute with National Geographic. He filed a federal lawsuit against the organization in December 2018 alleging copyright and trademark infringement. The case has been held up while the judge decides on a motion to dismiss it by Geographic. Stouffer had expected a ruling on the motion by the end of last year, but that hasn’t been forthcoming yet – much to his annoyance.

As much as Stouffer and his wife loved Aspen, they eventually grew tired of the snow their house received and the constant shoveling. Several years ago, they built their new home downvalley, which is roughly equidistant from Carbondale and Willits.

When asked how he likes living downvalley, he replied, “I love the location. I like sitting out on the porch,” which has a magnificent view of Mt. Sopris, “with a drink in the evenings, something we usually couldn’t do in Aspen because it was too cool.” He continued, “Carbondale and Basalt are great little towns. When I walk down the street of one of them now, I see more friends than I would in Aspen.”