A bond that transcends mountains 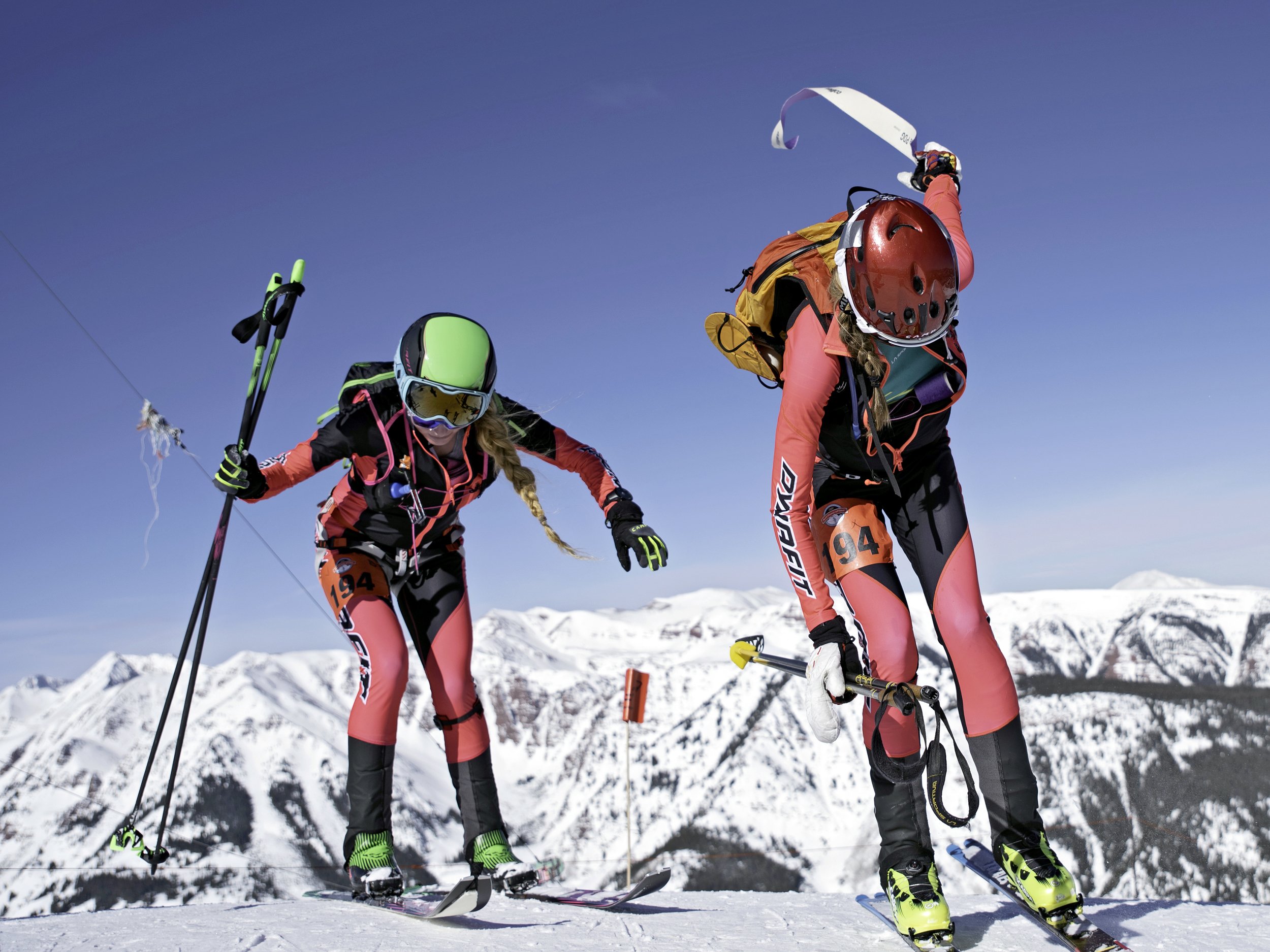 While some people would have opted out of a frigid day in the mountains, a small but mighty group of women tucked their heads and began the arduous ascent  of Snowmass Mountain — together.

Over the last decade and a half, elite female ski mountaineering (skimo) athletes in the valley have been competing at the highest, international level and supporting each other along the way.

When competitive female skimo racing broke onto the American scene back in 2003, it showcased a sport rich in sisterhood where athletes worked together to achieve the impossible. Pioneers Jeannie Wall and Emma Roca competed in the famous Pierra Menta in Europe becoming the first American women to do so.

In a 2015 Skin Track interview, Wall recalled the famous accomplishment and said that history aside she was most inspired by the partnership and support she gained from training and racing with Roca.

With the tone set, female athletes around the nation quickly followed suit and eventually found their own version of skimo sisterhood.

In 2006, Carbondale based  legend Sue King was among the first female athletes to climb uphill for the sake of enjoyment. Using just her nordic ski gear, King would regularly skin the mountains of Breckenridge.

Almost instantly King got hooked and she naturally evolved into one of the top skimo athletes in the area; she even qualified for the 2010 US Ski Mountaineering Team. Despite her obvious talent, King found that skimo was less about the accolades and more about the bonds she created.

“I remember in my experience that it was a super supportive community,” King said. “We were all fired up and wanted to compete, but it was never negative. We wanted to push each other. My best friend is Monique [Merrill, who has multiple national titles and top 10 finishes at worlds] and she is such a good supporter of me.”

As skimo racing continues to gain in popularity, the sisterhood remains as strong as ever; competitors become friends and in some cases even training partners. Local elites Jessie Young and Lindsay Plant do not always race together, but they often train together because of their common goals to work hard and have fun.

“The women who I race with are just awesome,” Plant said. “There’s such a good comraderie. Everyone is competitive, but we’re still supporting each other at the same time. You’re not shoving elbows with anybody, you’re like, ‘Yeah! Go!’ It’s awesome.”

For Young, the early morning workouts to see the sunrise and post-workout brunches with friends are reason enough to keep showing up. Whether she is training or not, Young enjoys the meditative pace and time she gets to spend outside in the mountains.

Young and Plant, however, are no strangers to success. As members of the US Ski Mountaineering team, the women placed 6th at the 2015 World Championship Team Race in Switzerland. Since then both women have had outstanding finishes winning the Grand Traverse together (2016), Power of Four Skimo (Plant, 2015, 2016, and 2018), Power of Four Triple Crown (Young, 2019), and US National Championships in Crested Butte (Plant and Young, 2016).

In 2017, Young and teammate Janelle Smiley placed fourtth at the World Championships in Italy — the highest finish for a North American team thus far.

Tips from the pros

Fortunately, you do not have to be the best athlete on the mountain to enjoy the benefits of skimo. In fact, all three women laughed when asked to recall their first race experiences.

From skiing with boots disconnected from the skis to placing a distant last at the Power of Four, the women have stories to share of their comical beginnings.

“I think the biggest thing is to just have fun,” Plant said. “I think a lot of women get caught up in the ‘Am I going to do well?’ aspect, but who cares? Just have fun! It is the first and foremost reason why we get into it.”

For beginners, the pros agreed that there are quite a few variables to consider before trekking out on your own — from the cost of gear to backcountry knowledge to the sport’s technicalities, skimo requires extra attention.

However, the elites stressed that with the right mindset, proper gear, and a supportive community, skimo can become a wonderful lifelong sport.

Regarding gear, King suggested demoing skis and boots before investing thousands of dollars. If you do decide to invest, Young said it best: “Happy feet are essential. Find a good boot your feet are going to be happy in!”

When you have your setup, head over to Marion Gulch in Carbondale. Plant said that while it does not have a lot of vertical, athletes can still get a lot of gear practice at a relatively easy location.

Athletes looking for a more challenging workout can buy a pass and skin up Sunlight Mountain. The vertical gains at Sunlight are plentiful and it is a great place to practice skinning before conquering upvalley.

Currently, Young and Plant are in the midst of motherhood, but still find the time to compete at a high-level.

On Saturday, Feb. 29, both women competed in the Audi Power of Four Ski Mountaineering race which played host to the 2020 USSMA Ski Mountaineering National Championships. Young and Plant both clinched a spot on the podium with their partners Nikki Larochelle and Grace Staberg respectively.

While King is no longer competing, she continues to skin everyday as a lifestyle choice. “I uphill everyday because I love it,” King said. “The longer I go the better I feel. The whole motion is nice and smooth on the body, especially when you’re in a rhythm.”

When asked why she loves the sport, Plant smiled broadly. Despite questioning her sanity during the middle of a race, Plant said she is captivated by the sport’s technicalities, opportunity to break from the norm with friends, and perhaps most of all: a chance to feel alive in the mountains.

If you are interested in learning more about ski mountaineering, but are not sure where to start, Cripple Creek Backcountry will be offering an Intro to Ski Touring workshop on March 10.